We developed this interior design for an unmarried men’s apartment. The client goes in for sports and lives healthy lifestyle. He hasn’t planned children yet and maybe he will live together with his girlfriend in this appartment. He likes to spend his time with friends while smoking shisha.

In this interior we should:

The main requirement was to combine balcony with a room. We warned the client that it will be difficult to approve. So, to fulfil this variant, it was decided to place glass partition between balcony and the room. 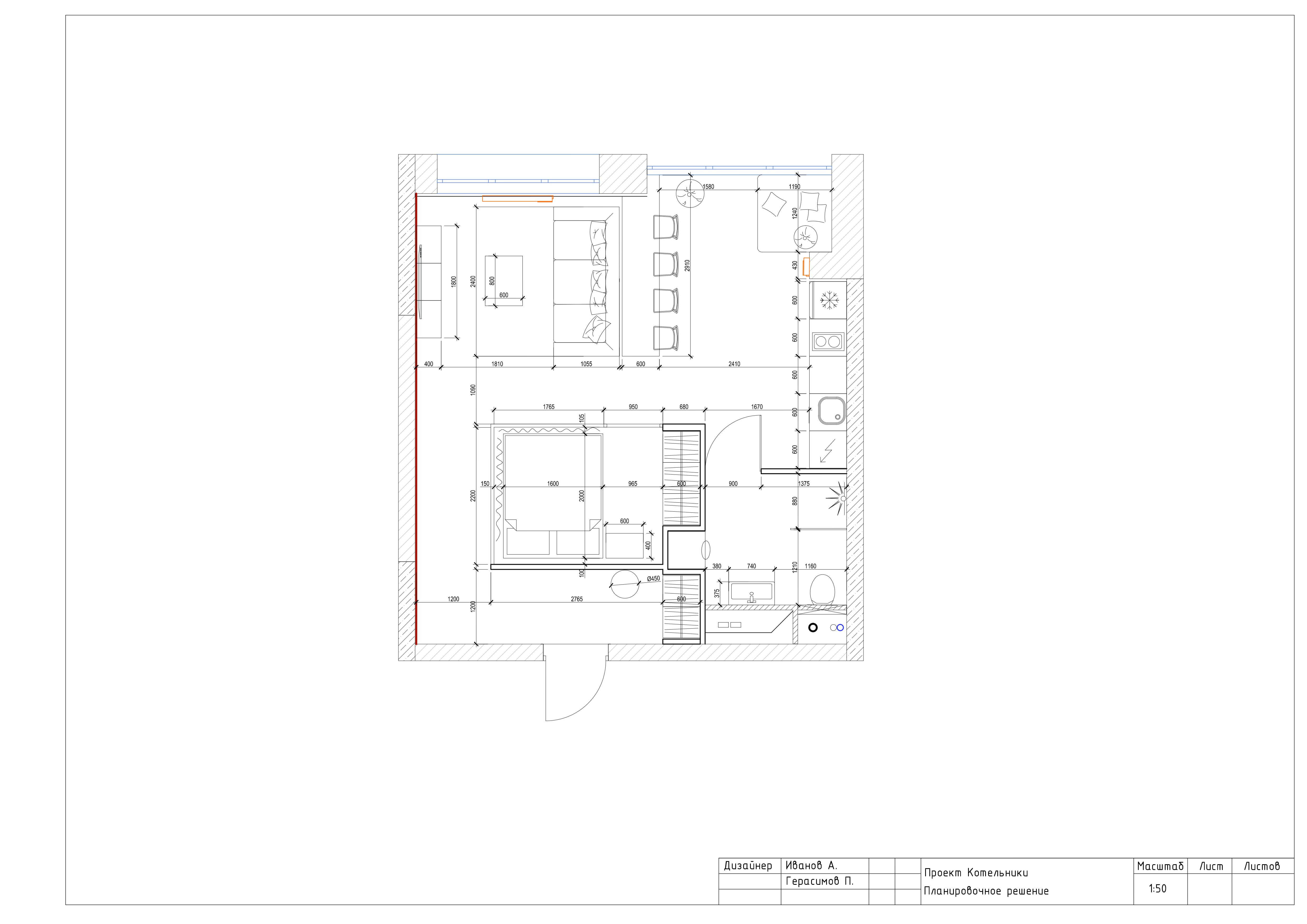 As we had a task to combine contemporary interior with a loft elements we used natural slate tile. It received a positive feedback from the client from our previous projects, so we didn’t have a question regarding the material of the tile.

You can see slate tile in the whole flat: in the kitchen and balcony, in sanitary facilities and hall. The floor of the other parts of the apartment is made of parquet planks. We tried to use more natural materials in the finishing. For walls finishing we used clinker brick fully made of concrete. It ideally imitates ancient bricks. In other parts we painted walls and used slate tile as on the floor. 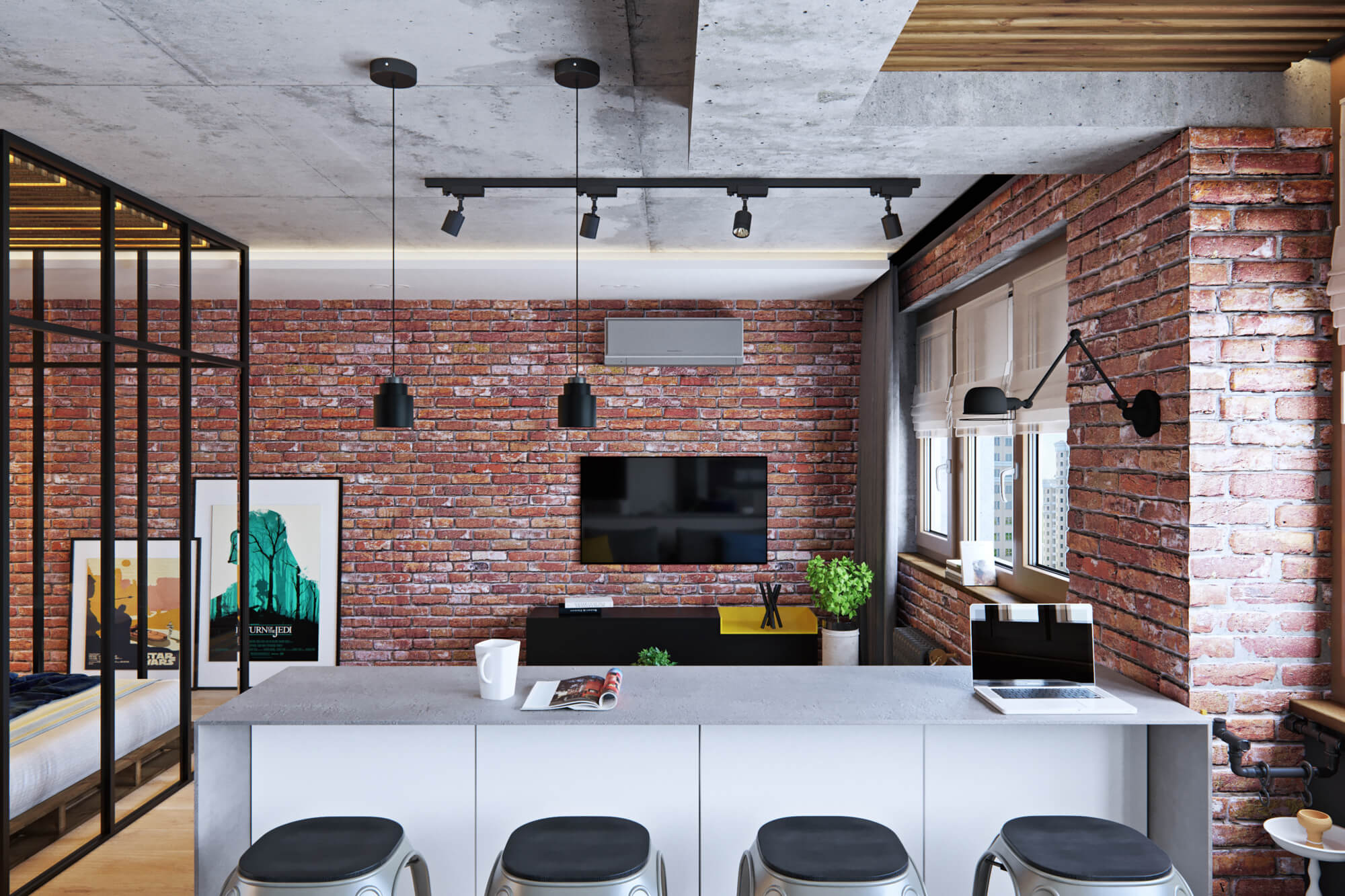 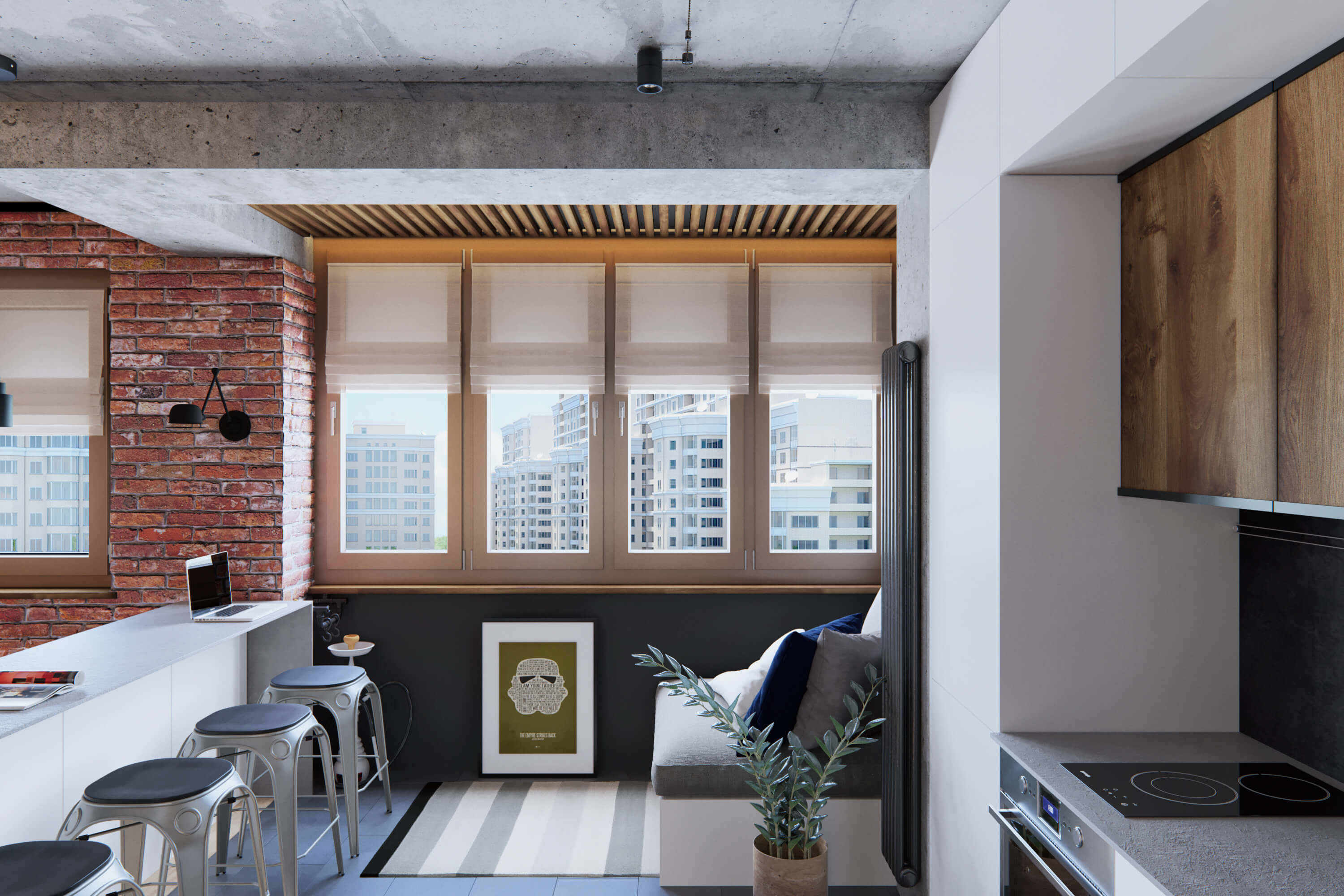 For finishing the ceiling we used almost nothing. We left existing concrete and slabs. Only over the living room we decided to emphasize the part of the ceiling downdrop to create the contrast in the interior. 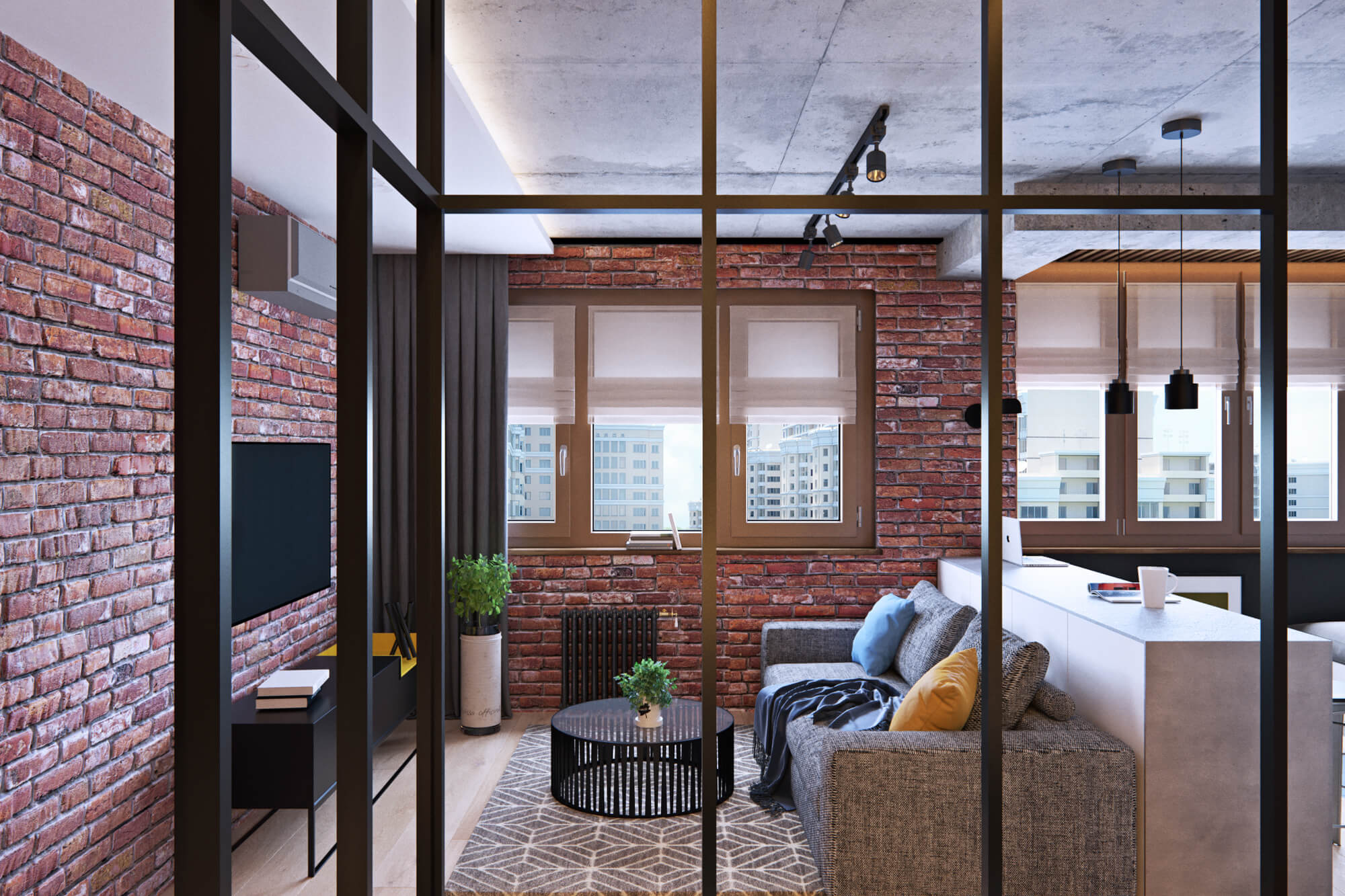 Storage systems in this interior we placed in a one line in the middle of the apartment. At the right side of the entrance we placed wardrobe and according to planning it is railed with the wall from the niche of sanitary facilities, with a built in washing machine and household cleaners storage. The next wall fences wardrobe, that is placed in the bedroom. 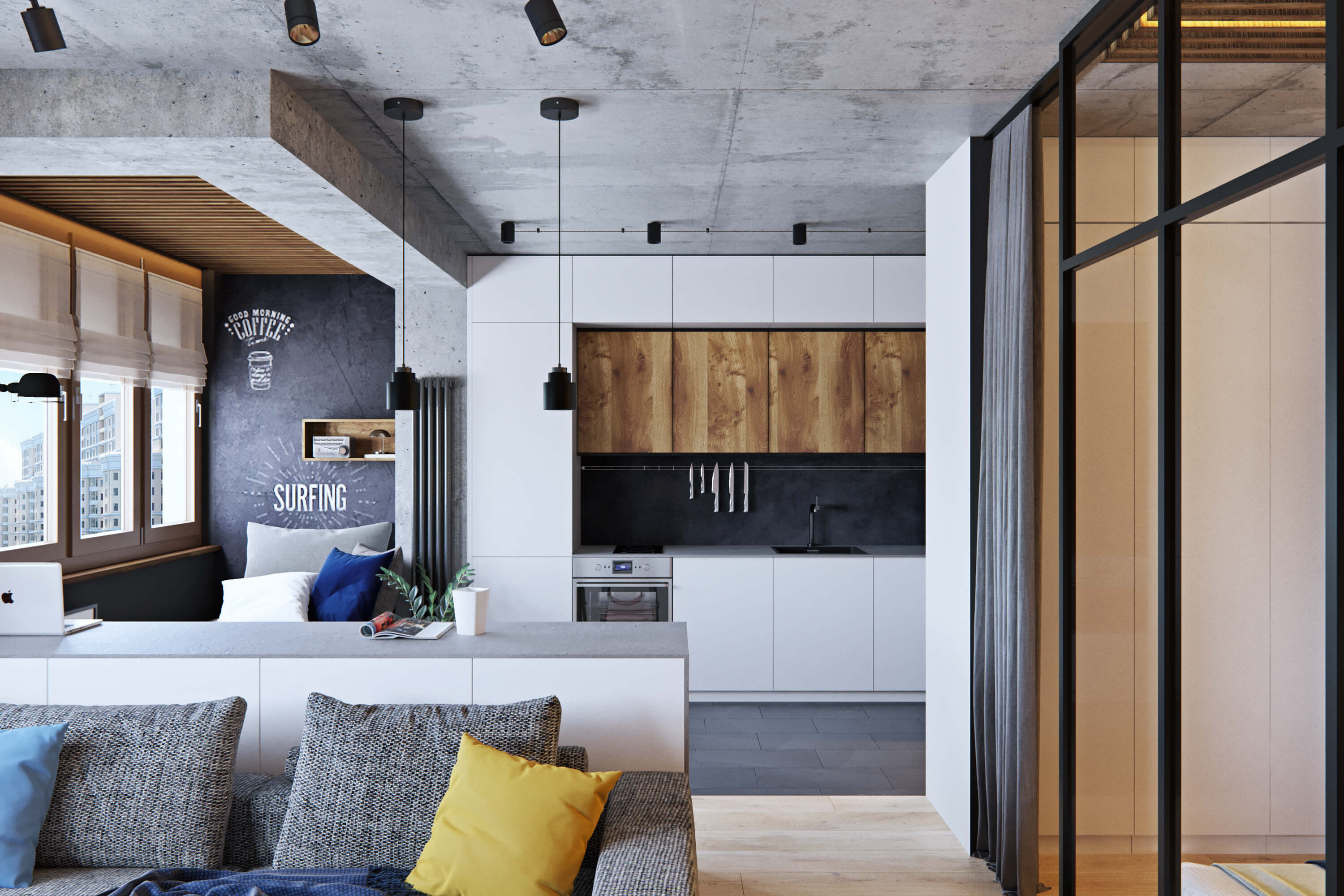 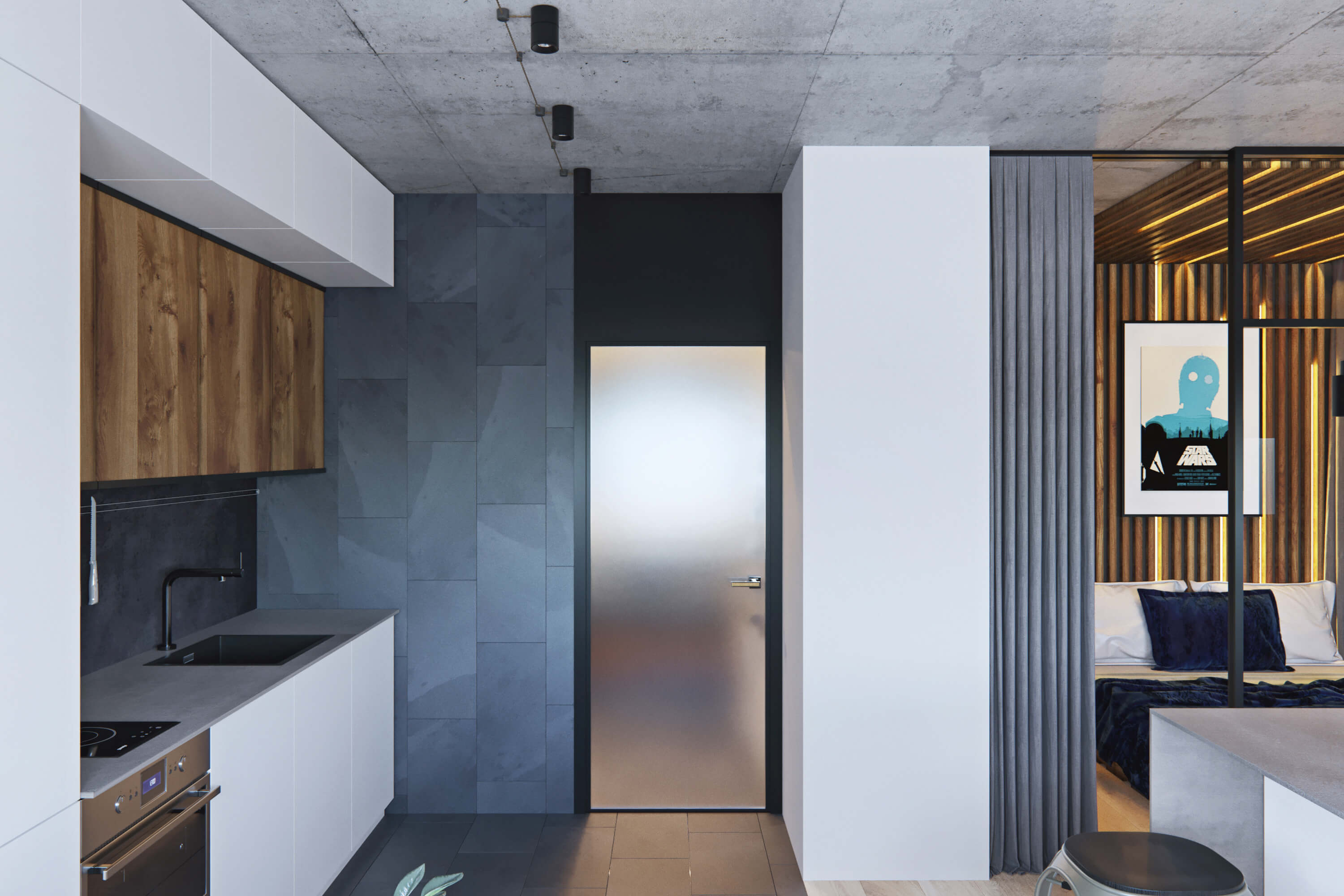 We have foreseen three illumination scenarios: common, functional and decorative.

Common illumination is represented by spot surface-mounted luminaire in all rooms and also by track light in the livingroom. As we left the ceiling uncovered, you can see duct of this lamps. Regarding the ceiling downdrop, we placed built in lamps there.

We placed common illumination in a wooden lathes of the bedroom ceiling. Thsi is unusual solution, because the illumination from them transfers from the common, on the ceiling, to functional on the wall. Herewith, both scenarios functionalize separately. 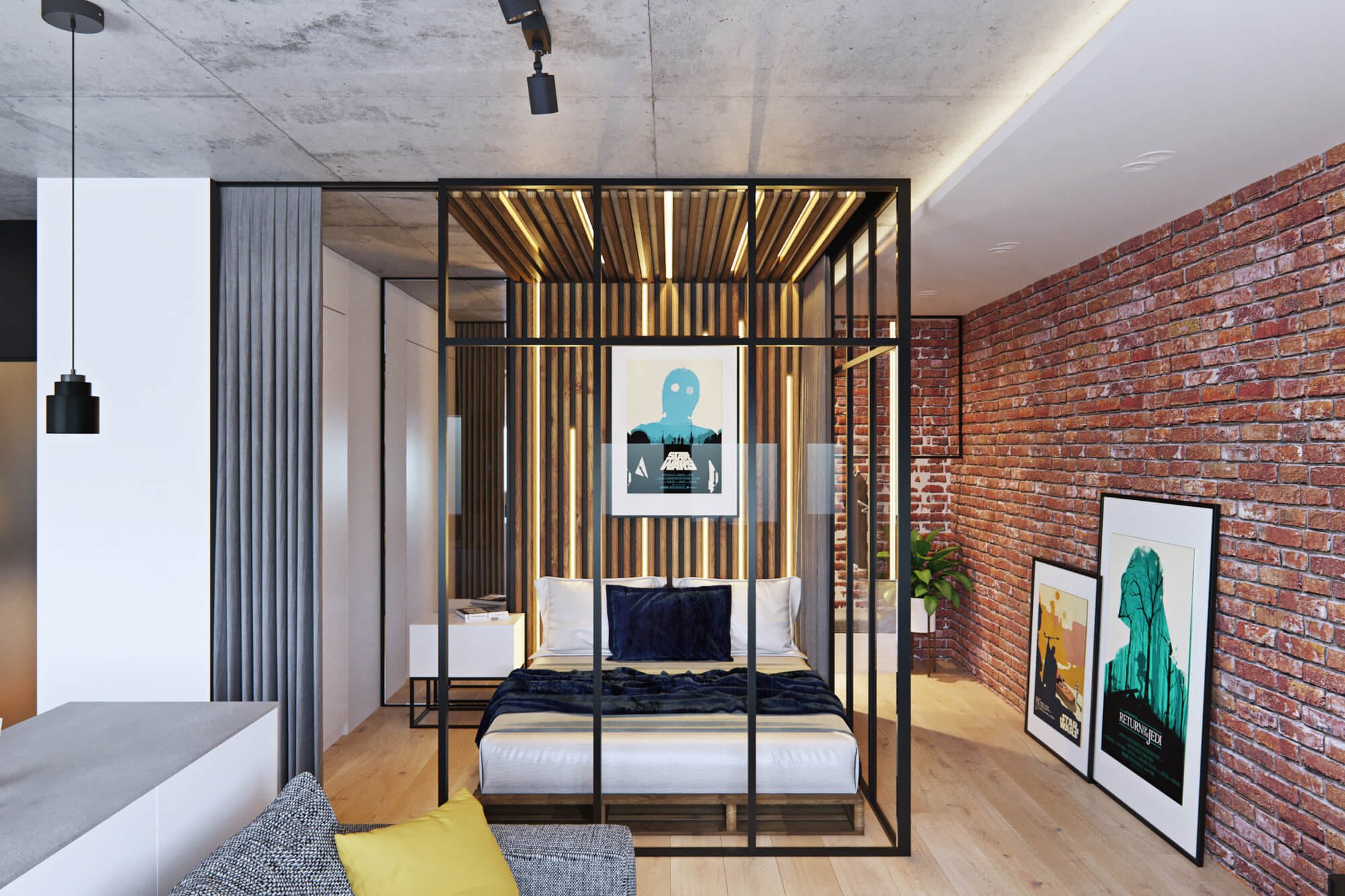 For functional illumination we used hanging lamps and wall lamp over the bar counter. Also, it is represented by LED sections between the lathes on the bedroom wall, which when are turned on provide diffused lighting for illumination of different elements.

In the sanitary facilities functional lightning is represented by illumination of the mirror with the help of built in lamps. In the kitchen this function is performed by LED strip over the cooking area and under the wall drawers.

Decorative illumination is performed by LED highlighting in the downdrop of the living room ceiling. In the balcony zone it is provided by highlighting of the niche in front of the window. When you leave only this scenario turned on, you can create an intimate atmosphere in the whole interior.

In the finishing of this interior we used neutral colors with the bright elements. These are whitish oak on the floor, grey color of textile, bricks and white walls. For the accents we used dark graphite slate tile and the same dark color for some walls. We tried to use light neutral tones  as much as possible, not to overload the interior with dark colors.

Also color accents are represented by the wooden lathes in the living room zone, decorative pillows, blue-ribbon vivid posters and also separate furniture elements. We foresee that the client in the future would like to have more neutral interior and did all bright elements removable. So, he will be able to create a distinctly different dynamic in the whole space. 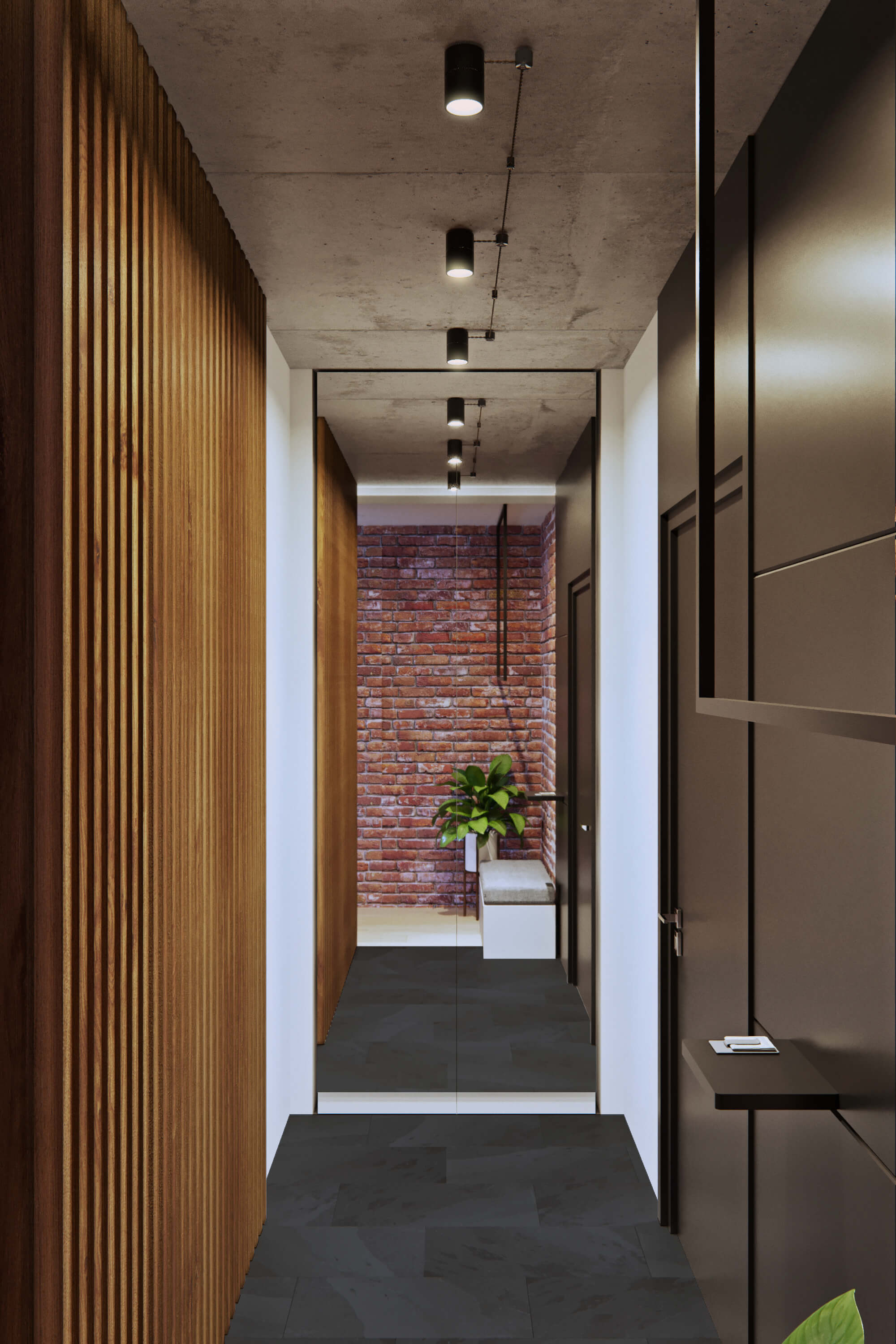 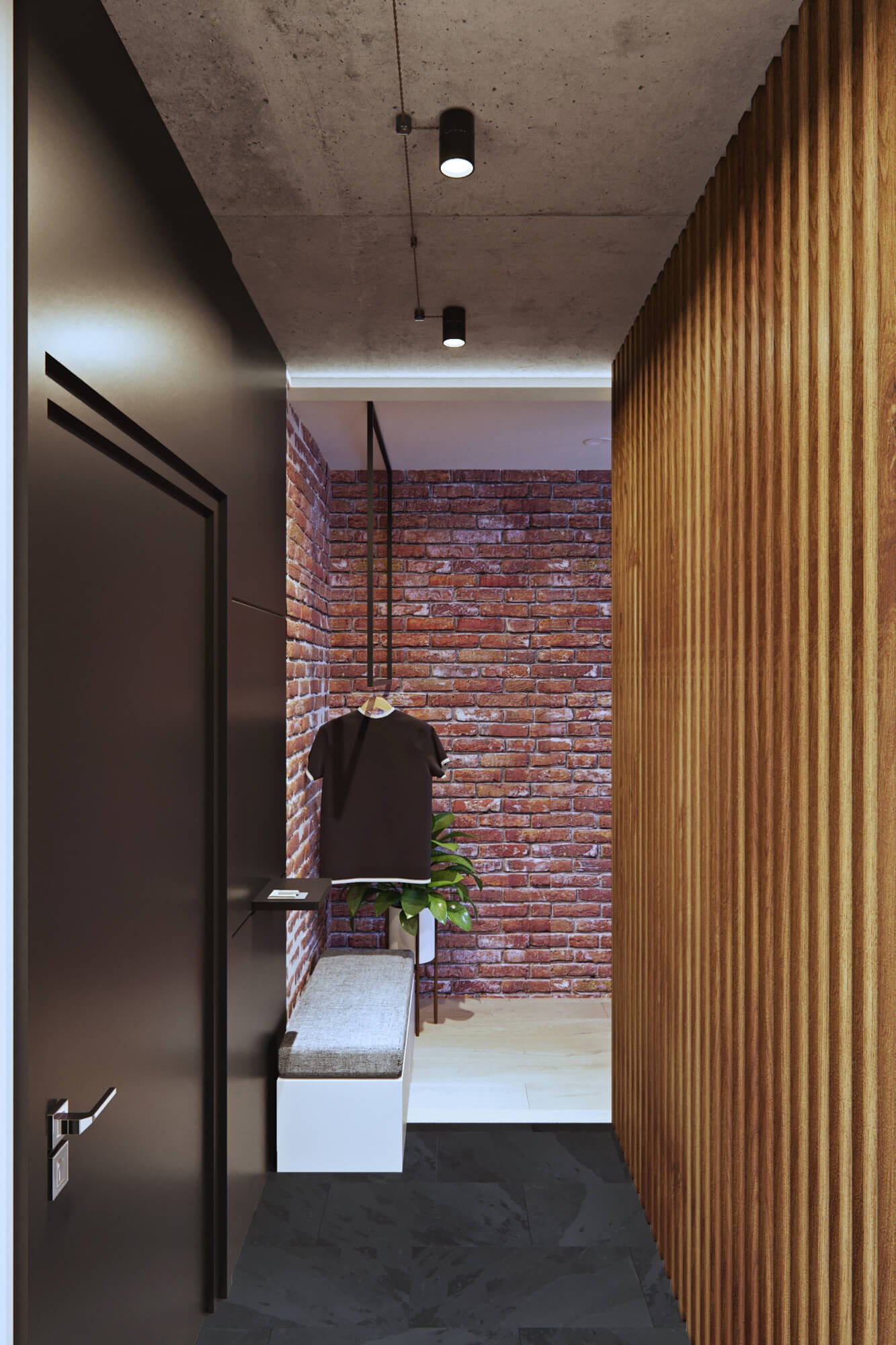 In this interior there are not so many furniture elements and all of them are optimized. That’s why we used Ikea and russian manufacturers items at a maximum. As for the rest, we used copies of designers interior items and lamps. All storage wardrobes are Pax systems from IKEA. We put partitions for them and received built in wardrobes, which are almost unseen in the apartment. The cabinetry is also from Ikea to optimize the budget of the client.

As for the soft furniture we used sofa of 8 Marta Selecta factory, model Stone. The bar counter is made of high cabinetry. They are standard and can be ordered at any factory. Cabinetry and bar counter table top is made of ceramic granite imitating concrete Laminam. Bar stools are bought in Deephouse, such stools are often used in the restaurants, so it creates bar atmosphere in the interior. This was one more requirement from the client side.

There is a few custom-built furniture in the interior. It is sofa in the shisha’s zone, the shelf over it, bench-table at the entrance and hanging drawer over the sink. The bed frame we did from pallets, that could be bought at a reasonable price and placed mattress on it.

The textile in this project is mostly neutral. It is represented by grey curtains, sofa and bottoms. We used bright elements locally, for example, colorful throw pillows. The main colors that prevail among them are blue, black and yellow.

At the designing stage we faced with complexity of placing the air extraction system in the kitchen, as we didn’t lower the ceiling. That’s why, we lowered the ceiling over the shower and closet basin zones, therewith we did symmetric podium to place flush to the stuck.

As the floor space of the apartment is not very big, we needed to place all engineering systems in one place. To ease the access to them, we foresee the drawer over the closet basin, one of the doors of which leads to them and replaces sanitary-engineering hatch. 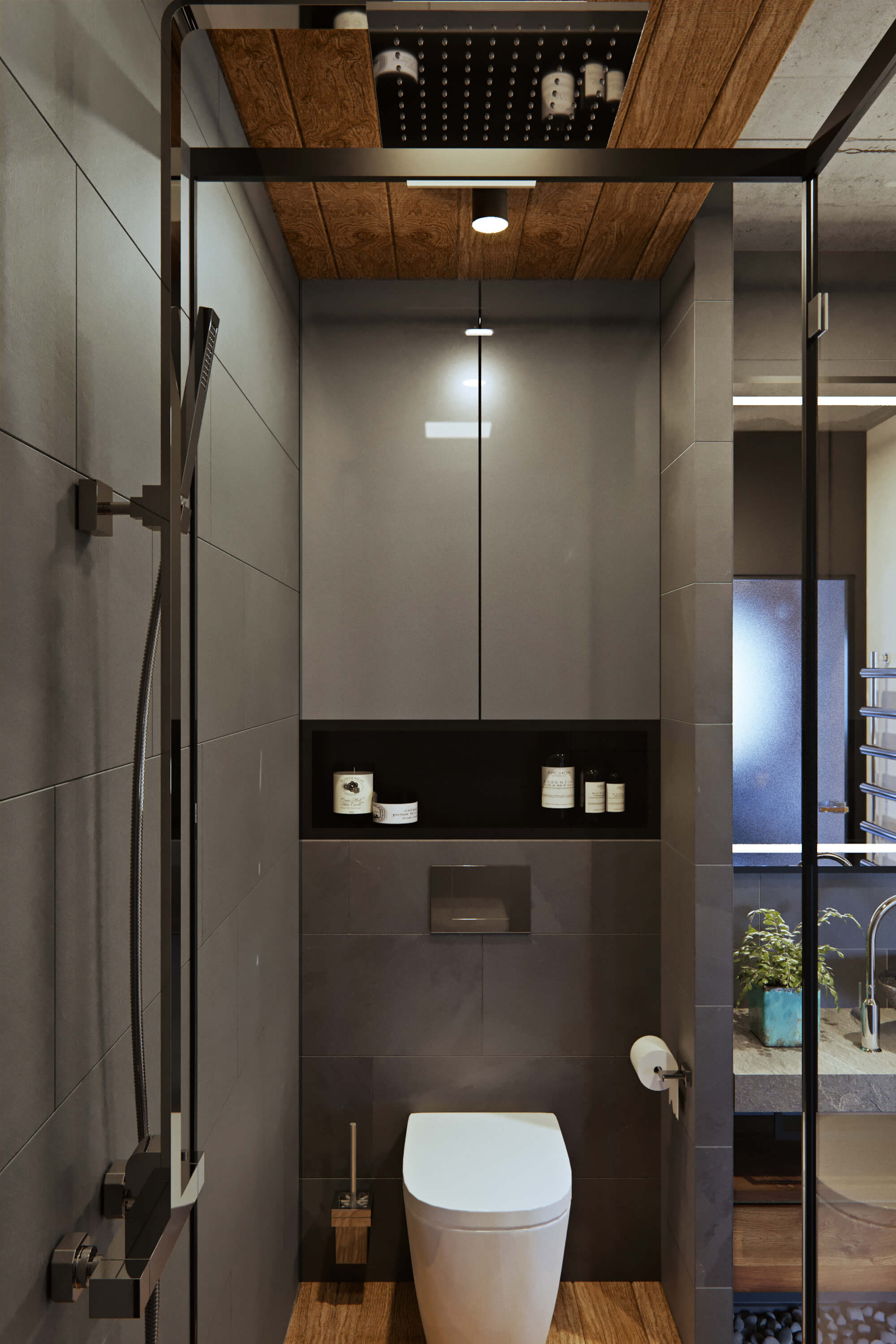 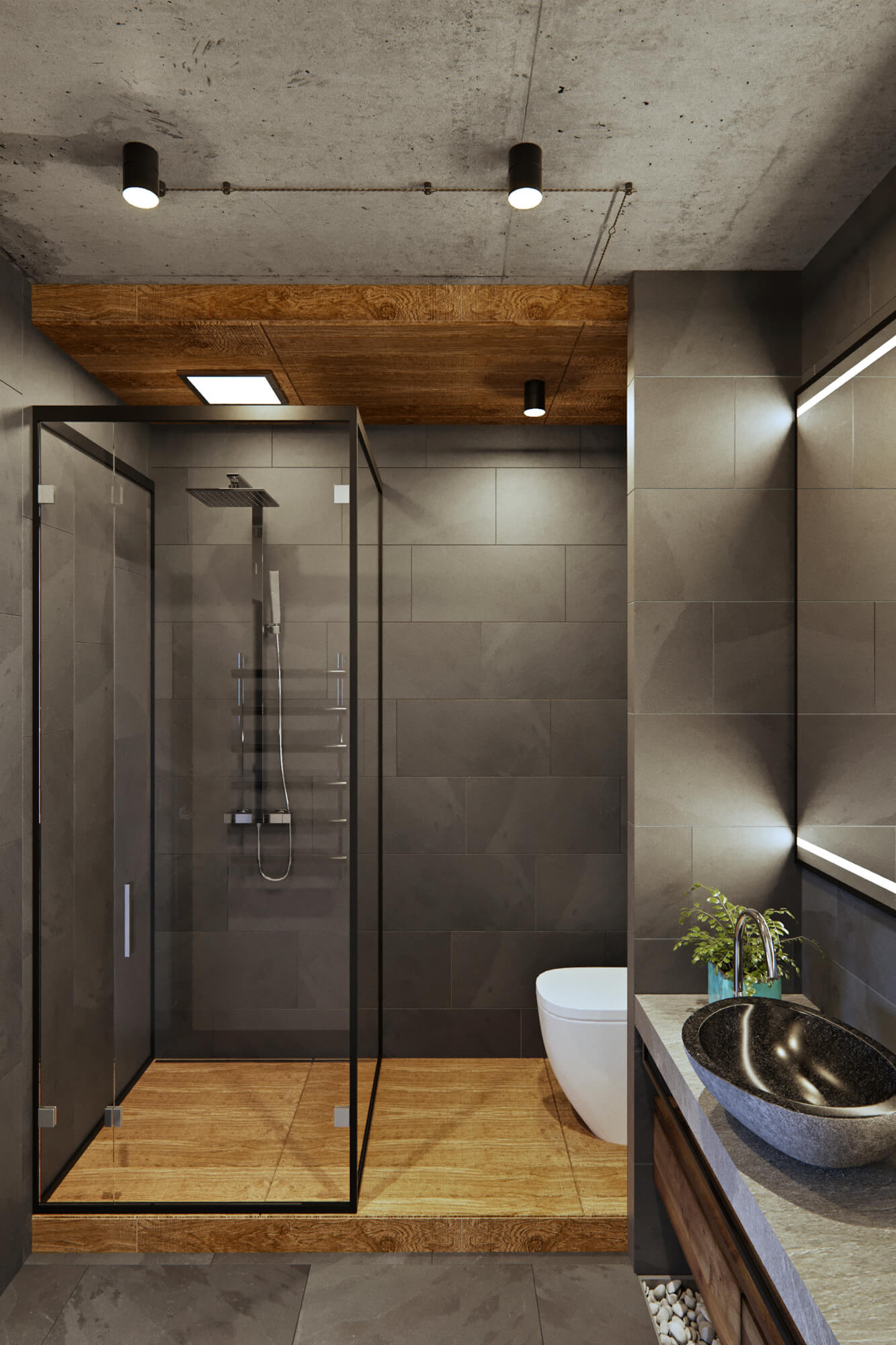 Also complexities could appear with the concrete ceiling. It should be evened and cleaned from plaster and some defects. This doesn’t affect the style itself, but anyway it is needed to prepare ceiling comprehensively. Maybe it will be lacquered. Also there will be open harnessing on the ceiling, so it should be done promptly to look aesthetically beautiful.

Complexities could appear with the balcony heat isolation for the shisha’s zone. We will need to place heat insulation there, and make even floor without podium. After communication with constructors, we found out that this solution could be implemented with the help of up-to-date materials. 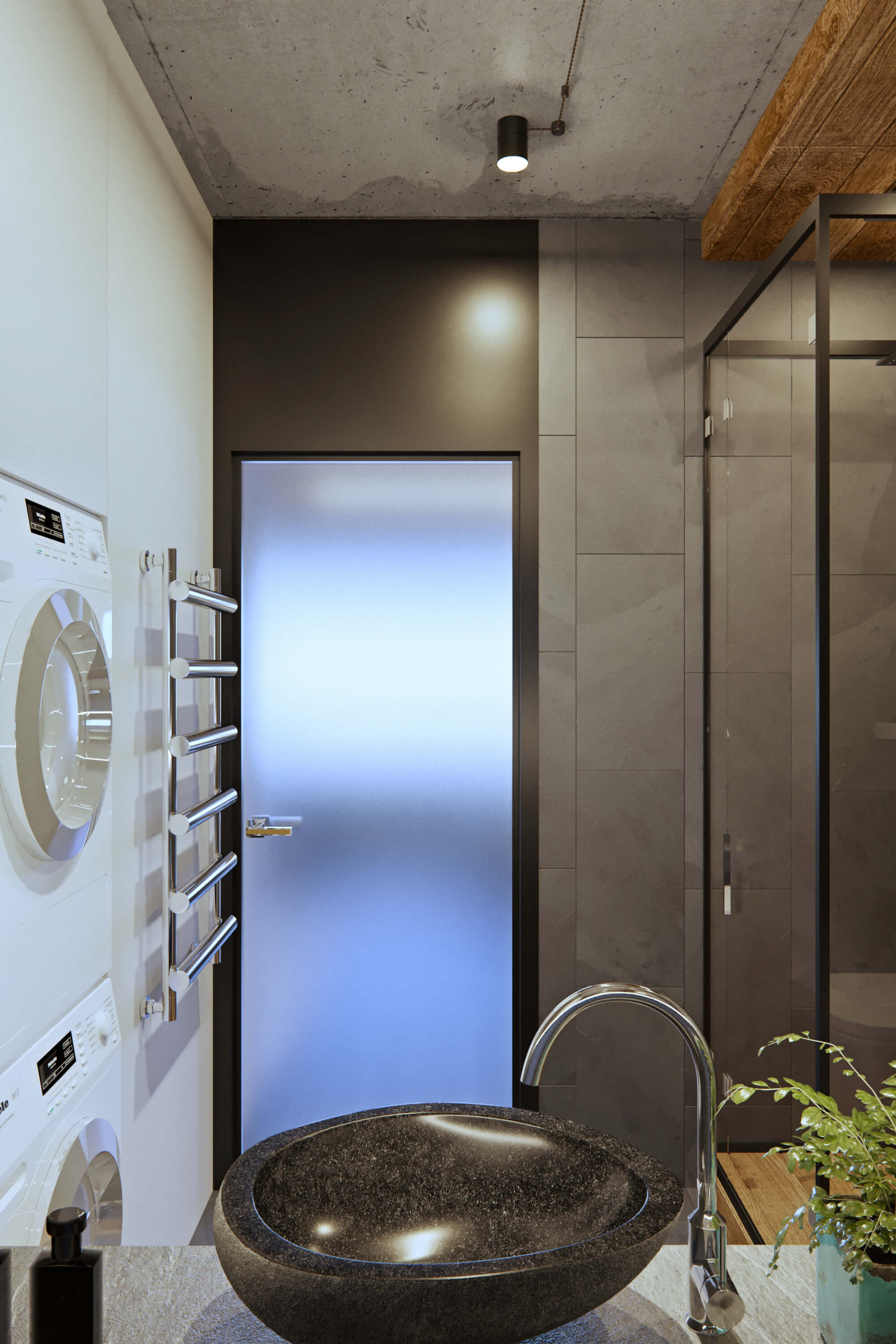 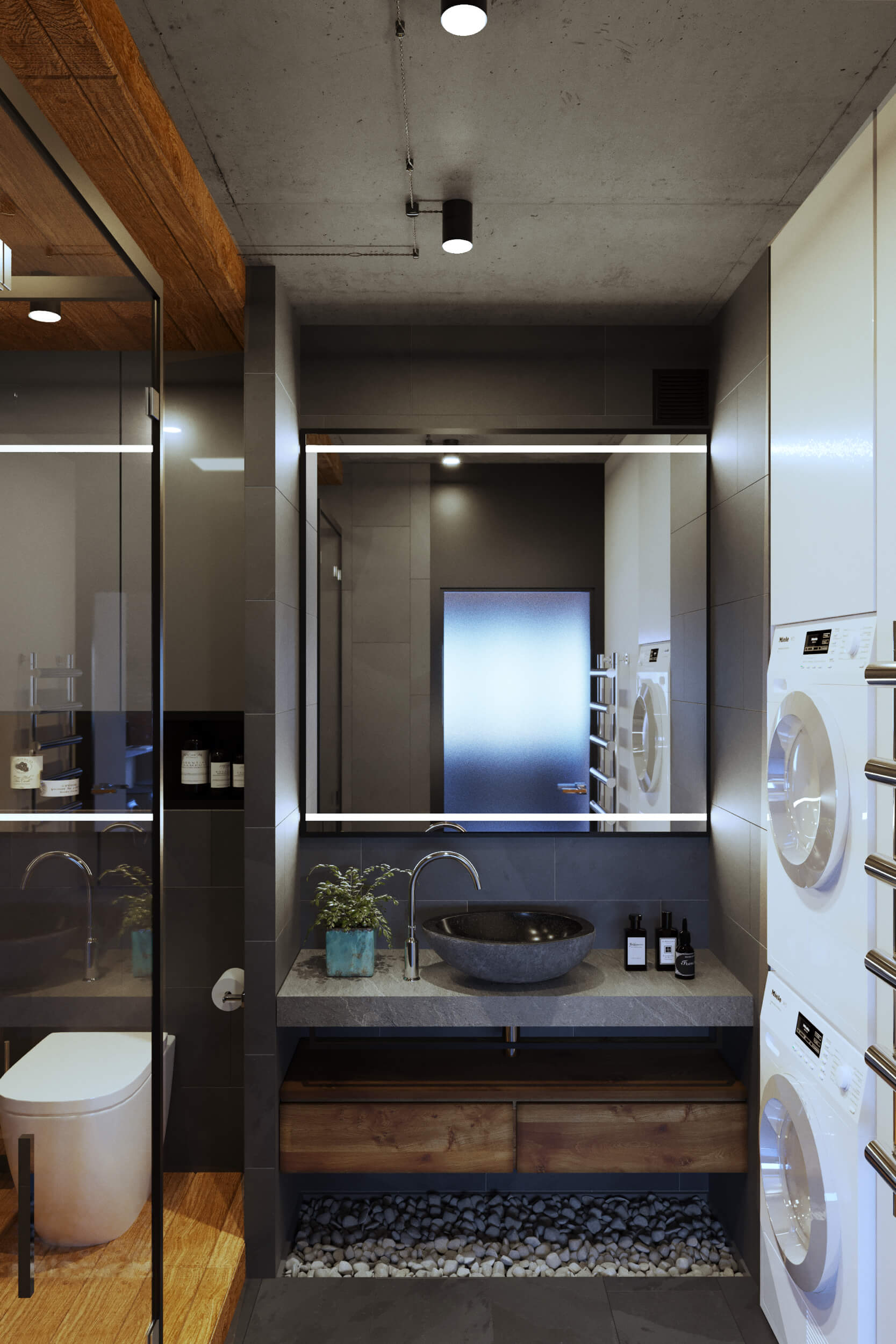