In this interior design will live a young family with two small children. Also they are permanently visited by 12 y.o. son. As the pair likes to host guests, we have foreseen the possibility of allocation up to 6 people simultaneously. The clients lead an active life, like snowboarding, roller-skating and other kinds of sport.

We had a task to unite two bought apartments in one, that’s why first of all our clients approved doorway in a load bearing partition between them.

As the family is big enough and likes to host guests, we decided to use one part of the apartment for public zones and another one for individual. In public zones we placed dinning room, living room, kitchen, dressing room and sanitary facilities for guests. In individual zone we placed bathroom, big children’s room, bedroom for parents and dressing room.

We organized a big space for the common zone of kitchen, living room, dining room and also we have foreseen dressing room in a public zone. Herewith, there is no space left for guests sanitary facilities, that’s why we placed in a part of individual zone. As we placed them near the doorway, the problems of entering the individual zone by guests won’t exist. For comfortable family communication during the breakfast preparation and also for fast eating we decided to place bar counter. 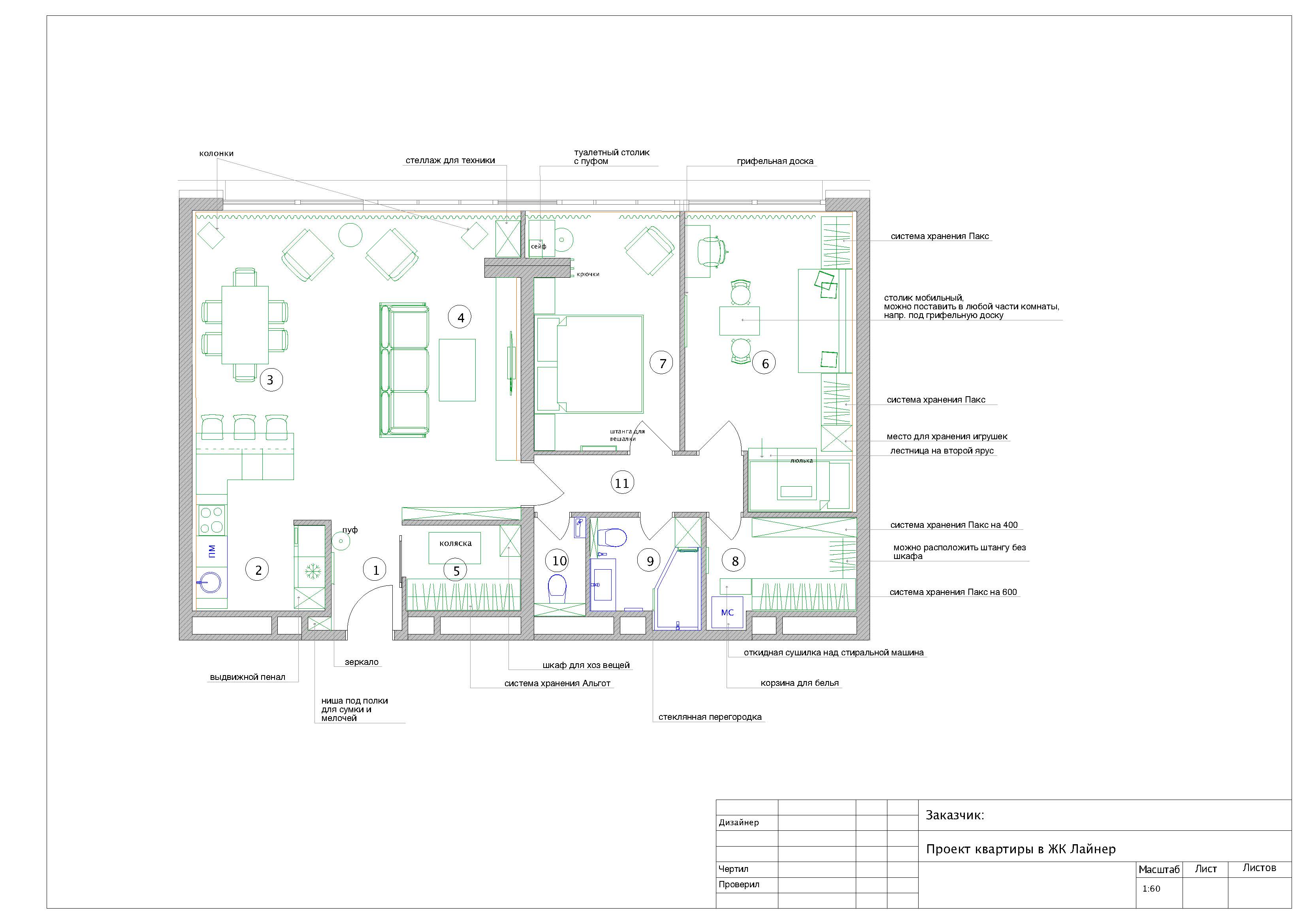 Planning is complex enough due to huge amount of requirements to the rooms, especially in the individual zones . The bedroom is small, we divided it into two zones. One zone is for sleeping, it is exactly where we placed bed, and the second zone is for makeup – as individual zone for a woman. Zone for the rest is represented by armchair.

Children’s room is full of functional zones. In the sleeping zone we separated place for bunk bed and bassinette. In the middle of the room we placed sofa for stay of the oldest son. Moreover there are zones for working and playing.

The main requirements for finishing were to:

Therefore we received vivid concept, in which we used three colors in interior: white, grey-black and wooden. 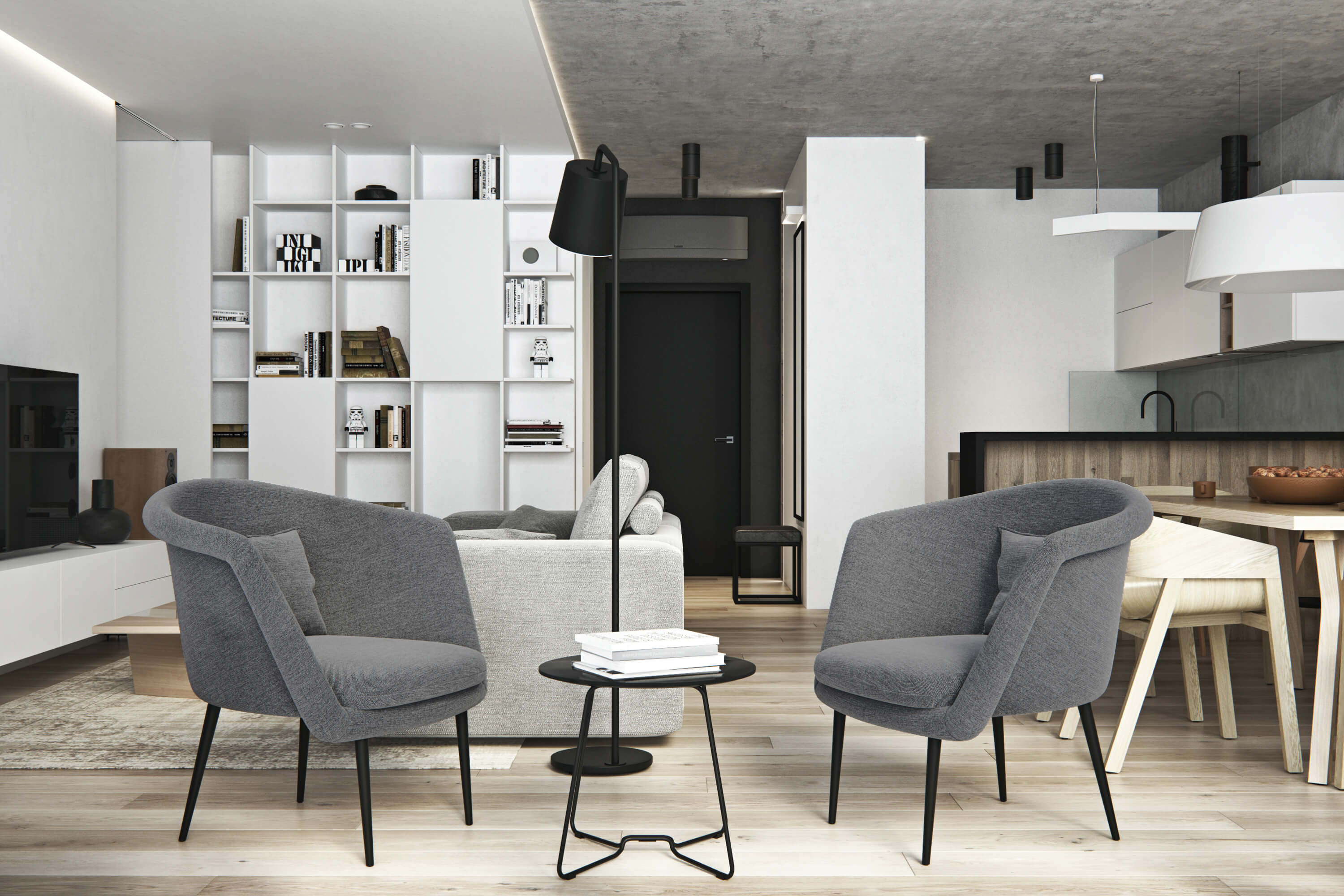 For finishing we used micro concrete on the ceiling and walls, white paint, parquet planks on the floor. Ceramic granite tile was chosen at the same principle. On the walls we used tile imitating concrete, tile imitating honeycombs of bright grey color. Also wooden accents on order-made furniture, wooden shelves and drawers. In the guest sanitary facilities we emphasized the wall by tile imitating wood Porcelanosa Oxford. 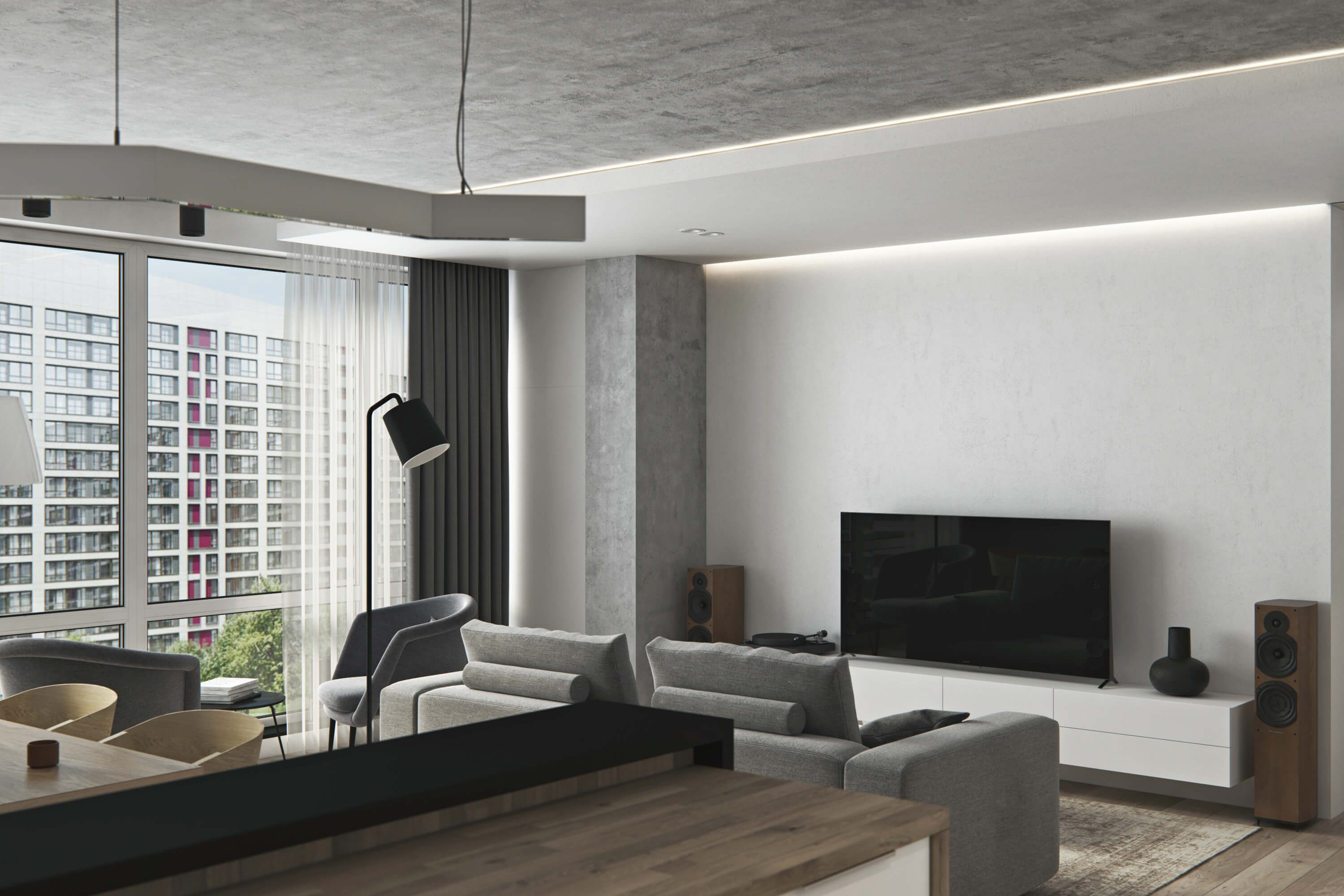 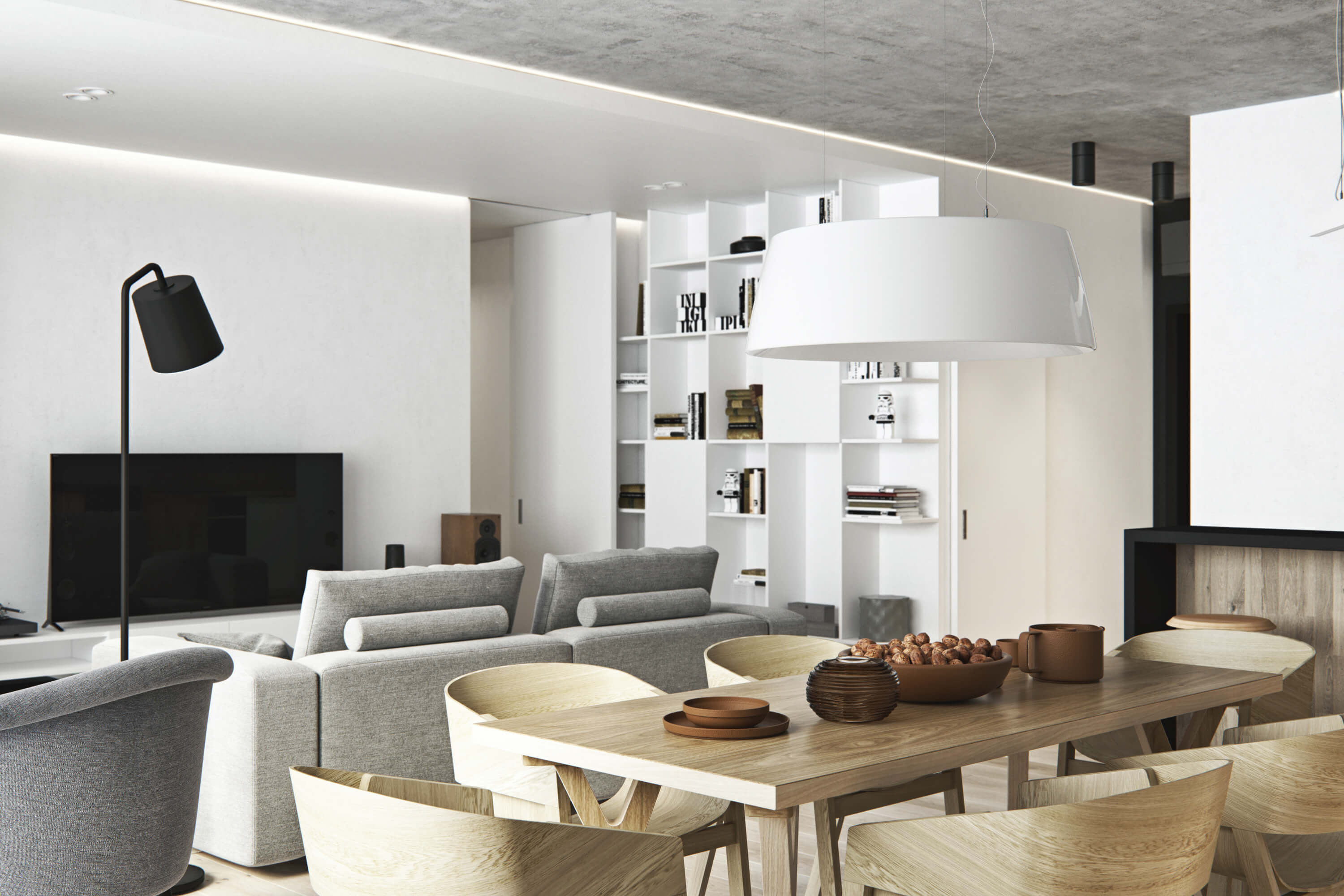 The clients didn’t want to use paintings and other small decorative elements, that’s why we used finishing materials for this purpose. We used grey color range, only in  the children’s room we added blue and azure tones in the textile. In other elements children’s room finishing doesn’t distinguish from other rooms.

We used a lot of storage systems in the interior. On the left side of the entrance we foreseen dressing room, in which you can place all over clothes and footwear. Also it can be used for drying undercoats and down parkas. Moreover there will be place for storage of baby carriage, while the child will grow up. In this dressing room we used storage system of IKEA Algot. 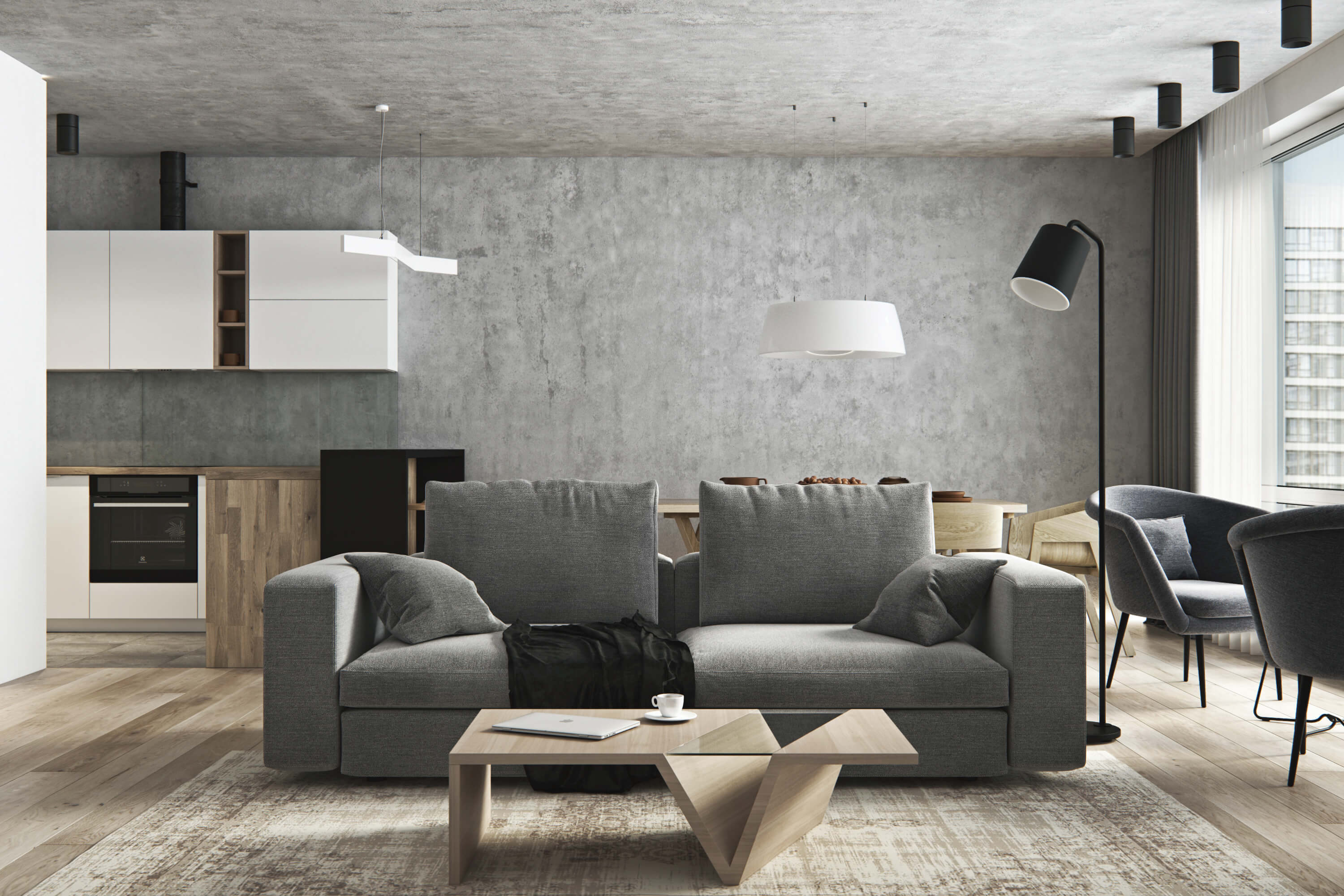 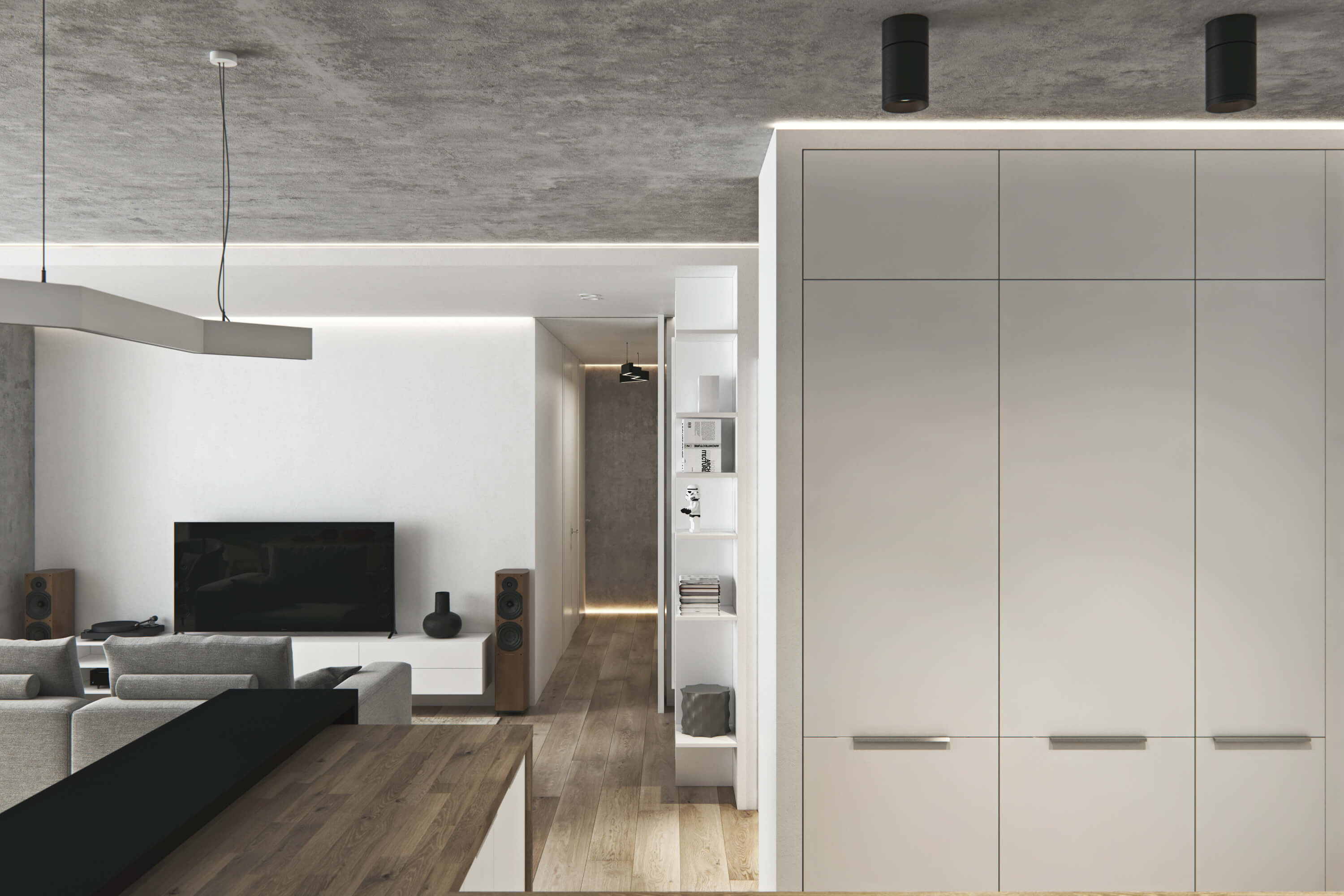 All storage systems are hidden over the walls or built in. This was necessary to create minimalism in the interior and take away all odd things. In individual zones there is also dressing room, where we placed washing machine and drying machine. We also used Ikea Pax storage systems.

We put an emphasize to illumination in this interior. As there is no decorative elements, we used illumination for this purpose. In the common zone of kitchen-living room-dining room we used decorative LED lighting to emphasize the size of the room. Also it lights the concrete on the ceiling and white wall over the TV. 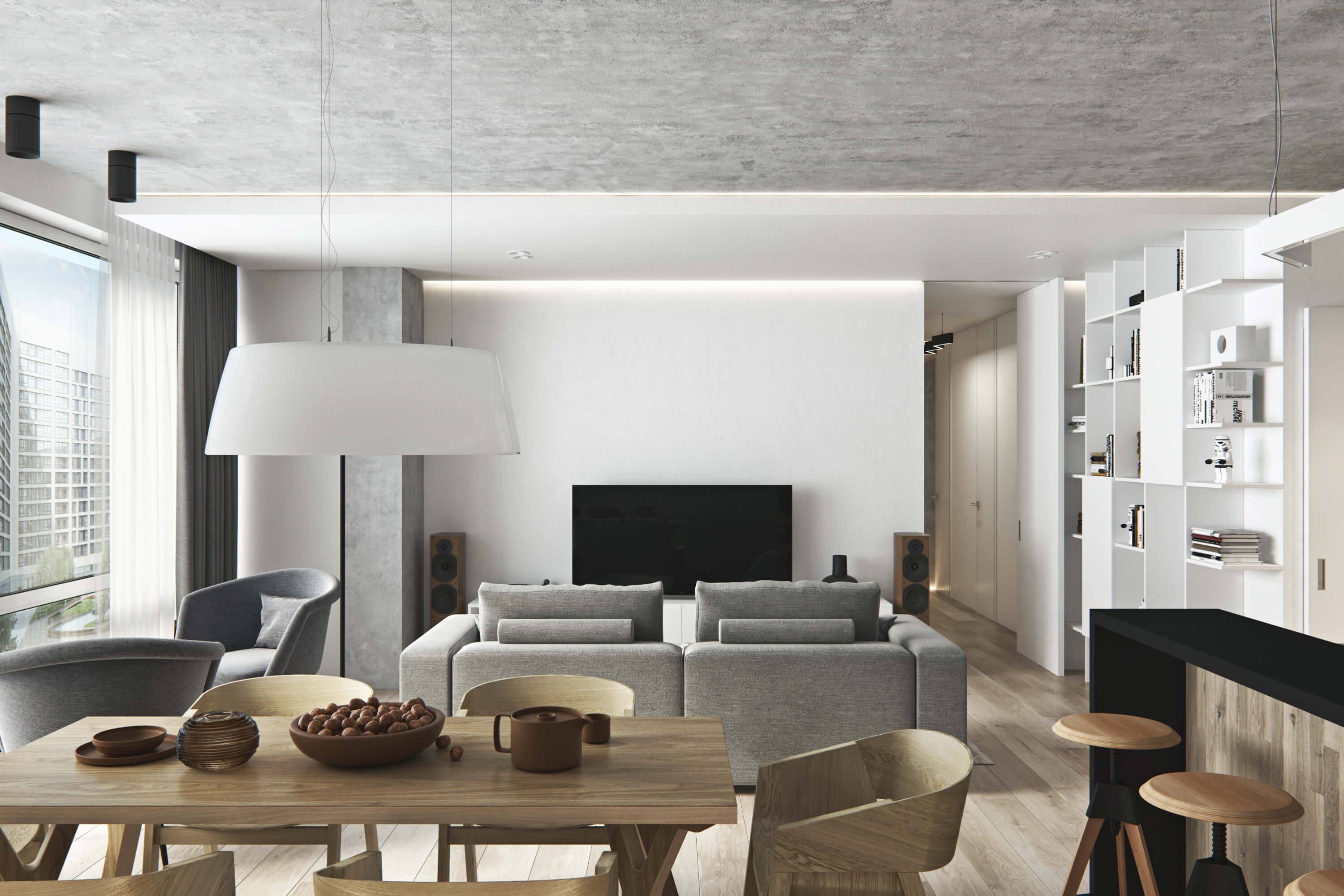 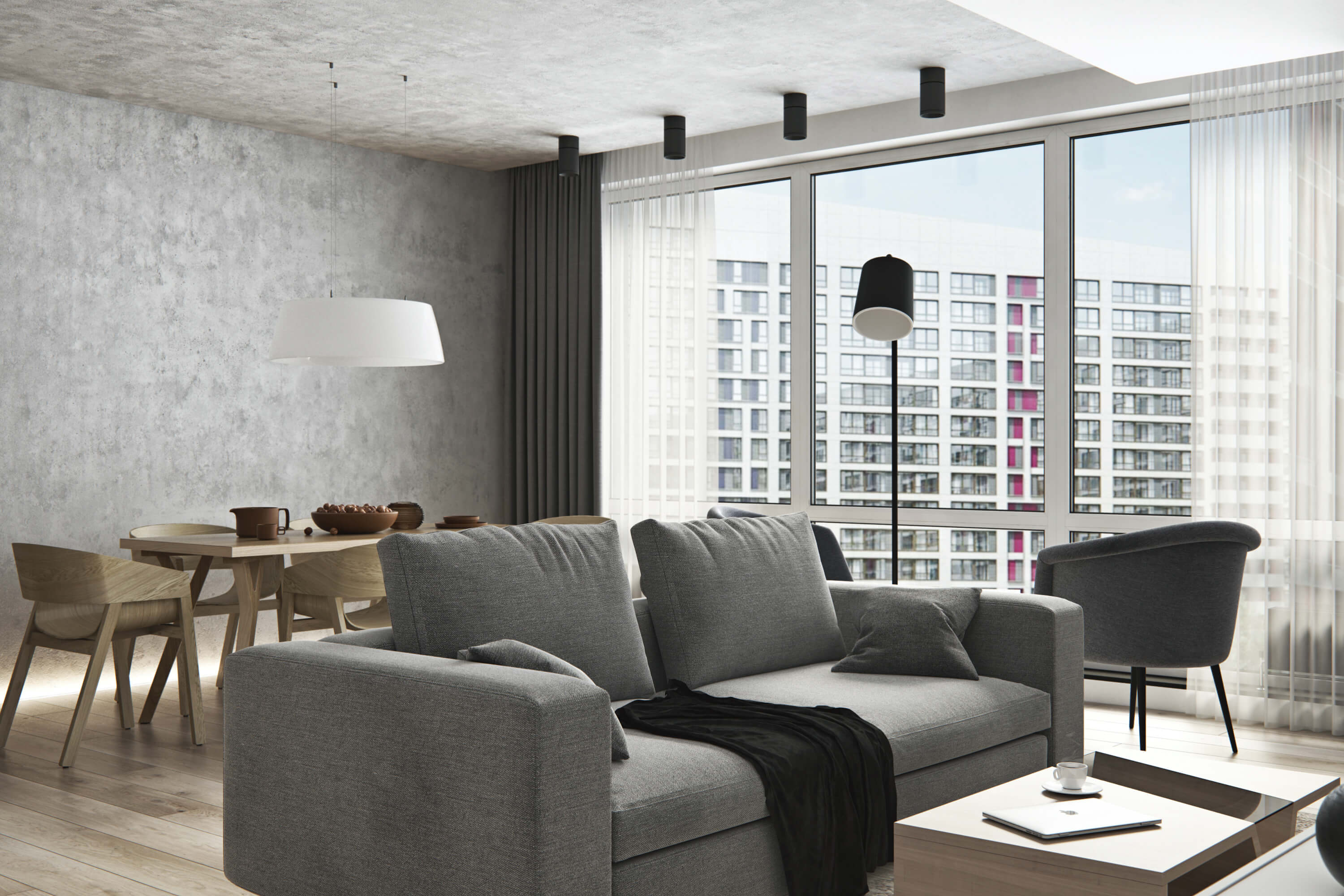 White leave of the ceiling is dividing the room into two parts and decorative illumination will emphasize floor space of the room. There is general lightening in the form of built in, imperceptible and laid on black lamps. Also there is functional illumination, it is represented by floor-lamp near the sofa, chandelier over the table and profile lamp over the bar counter. All this illumination devices highlight function, id est specific actions. 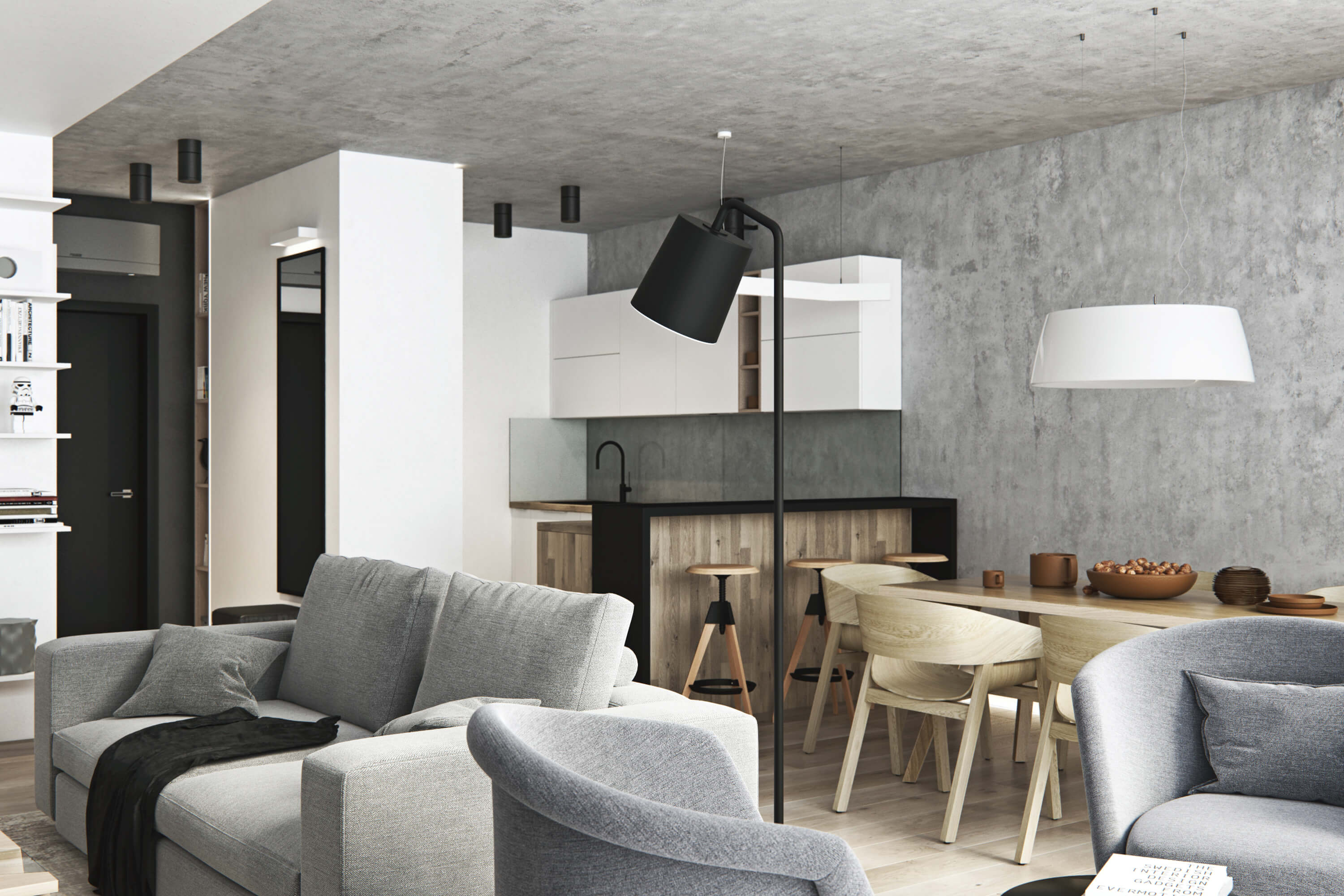 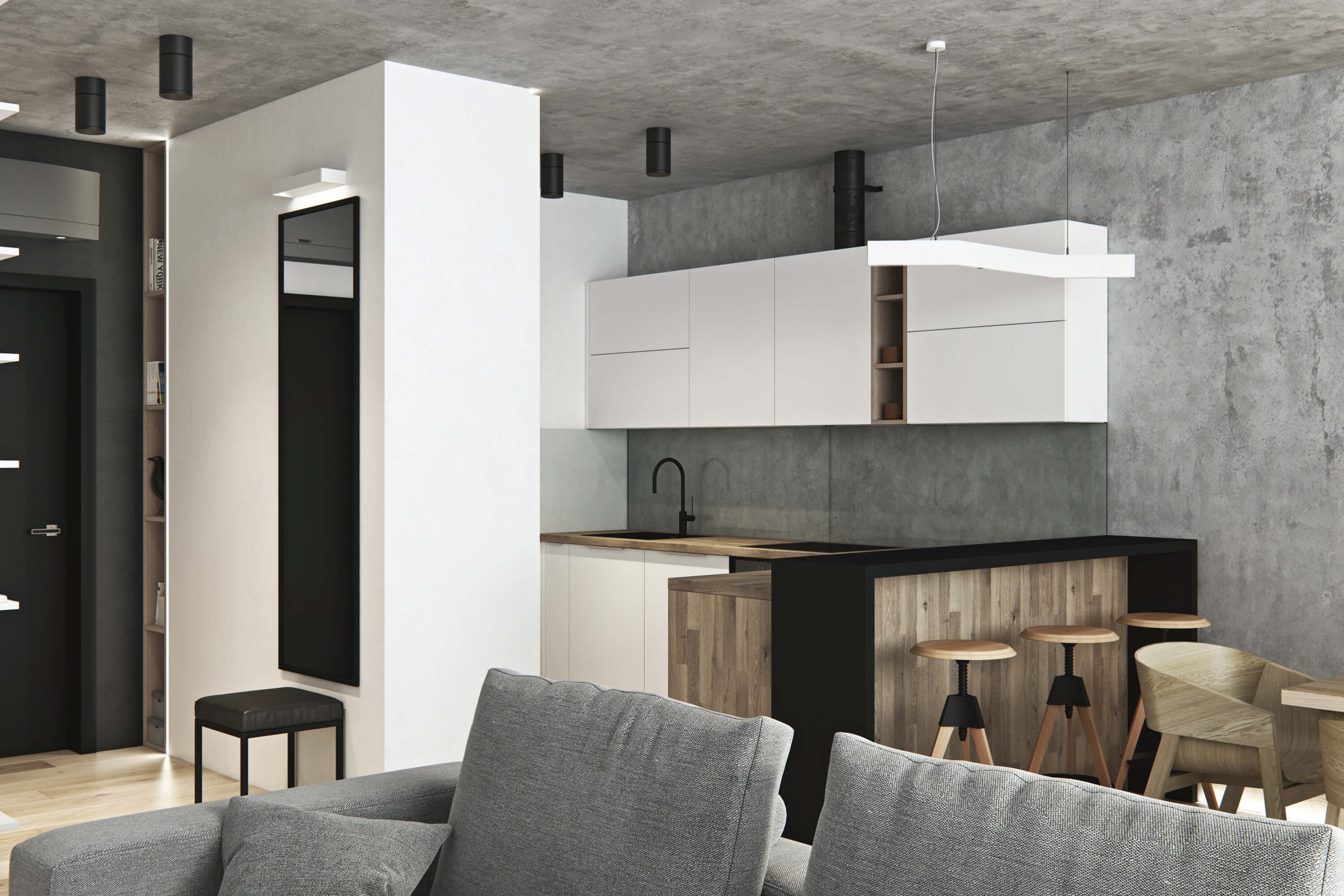 In the hall zone and bedroom used the same technique with the help of highlighting. The emphasized wall with the cover that imitates concrete is highlighted from top and bottom to stress the texture.

In the minimalism interior lamps shouldn’t be striking. That means, that at the whole we shouldn’t see any complex forms of the lamps. That’s why we used built in wall lamps of simple and laconic forms and also hidden LED highlight.

As we mentioned above we mostly used white, grey-black and wooden colors. In the children’s room we did an accent with blue and azure tones of textile. Moreover, you can see accents in black elements of metallic items and other local elements. They create special atmosphere in the interior and make it more contrast and interesting. 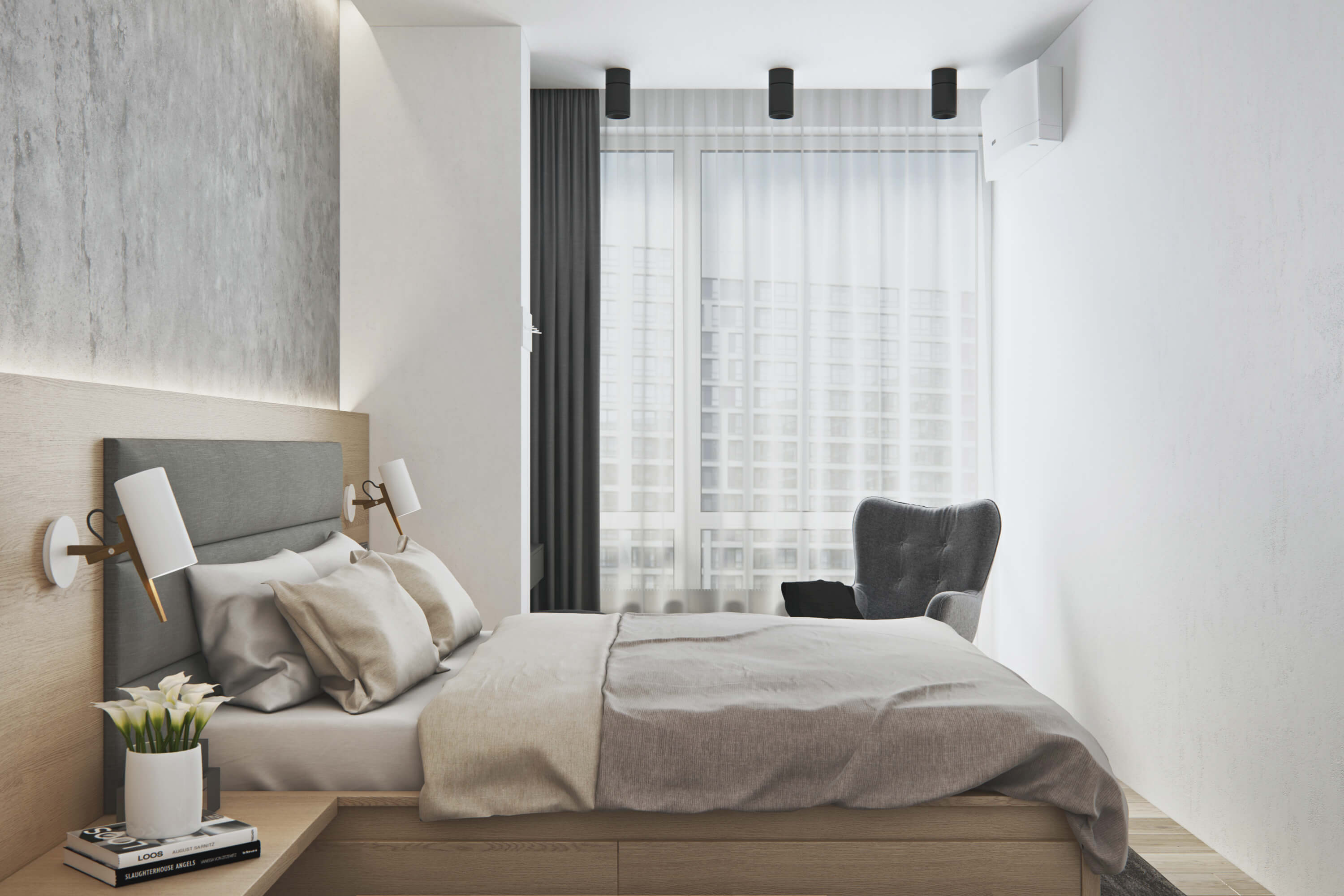 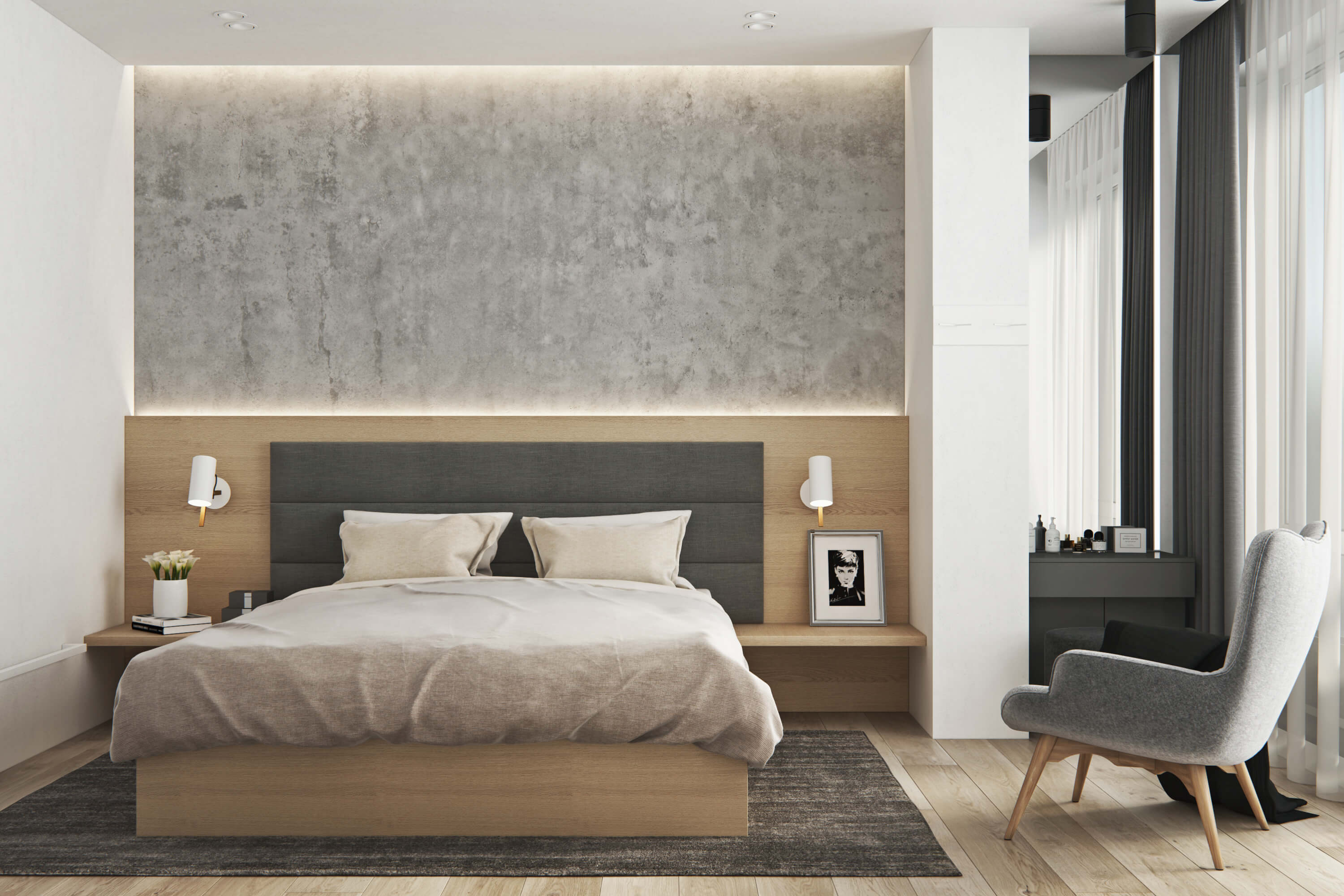 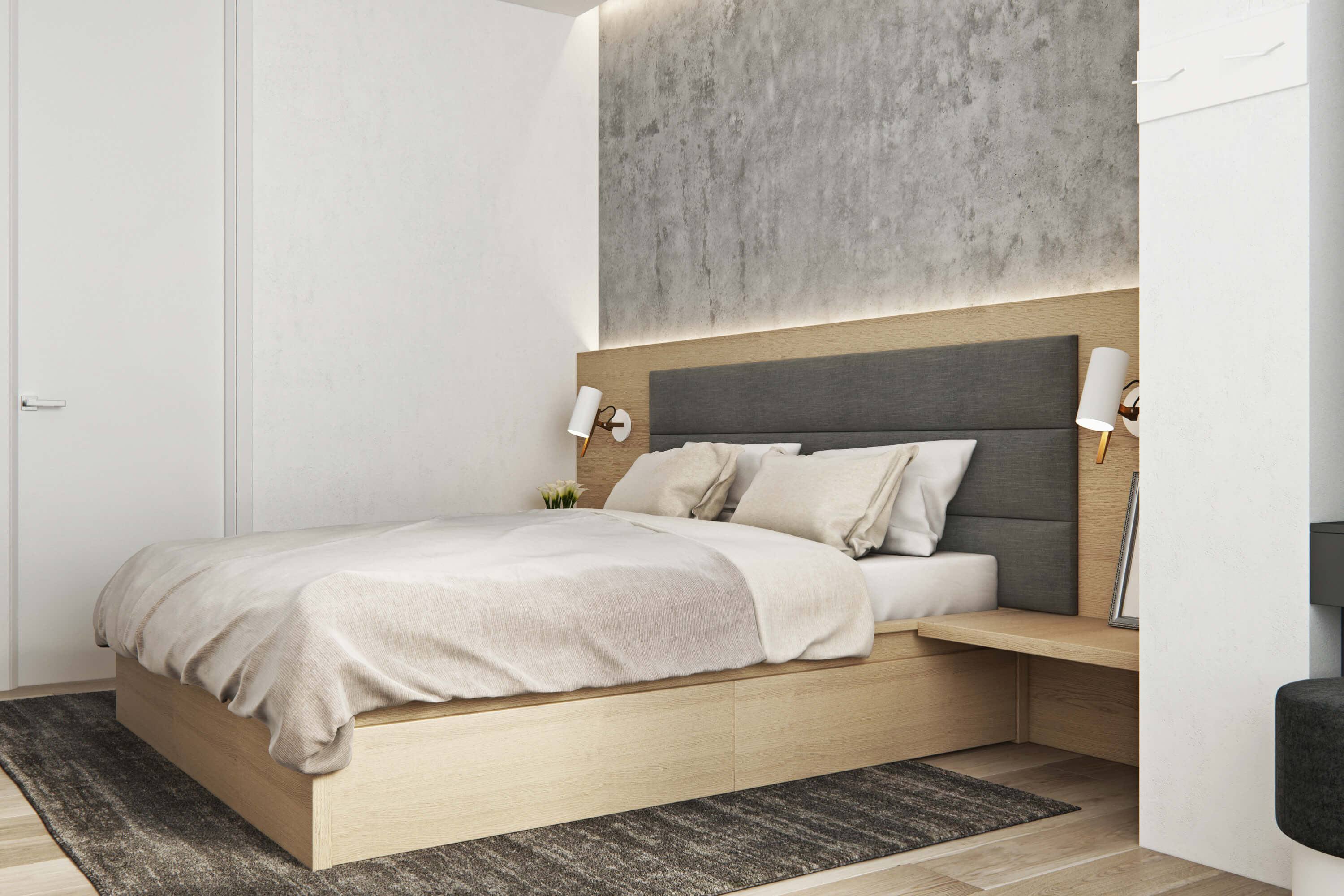 During the creation of this project we acted within defined budget. That’s why we should find inexpensive replicas of designers items, and also according to the request of the client use not so popular items, that are repeated in all designer interiors. 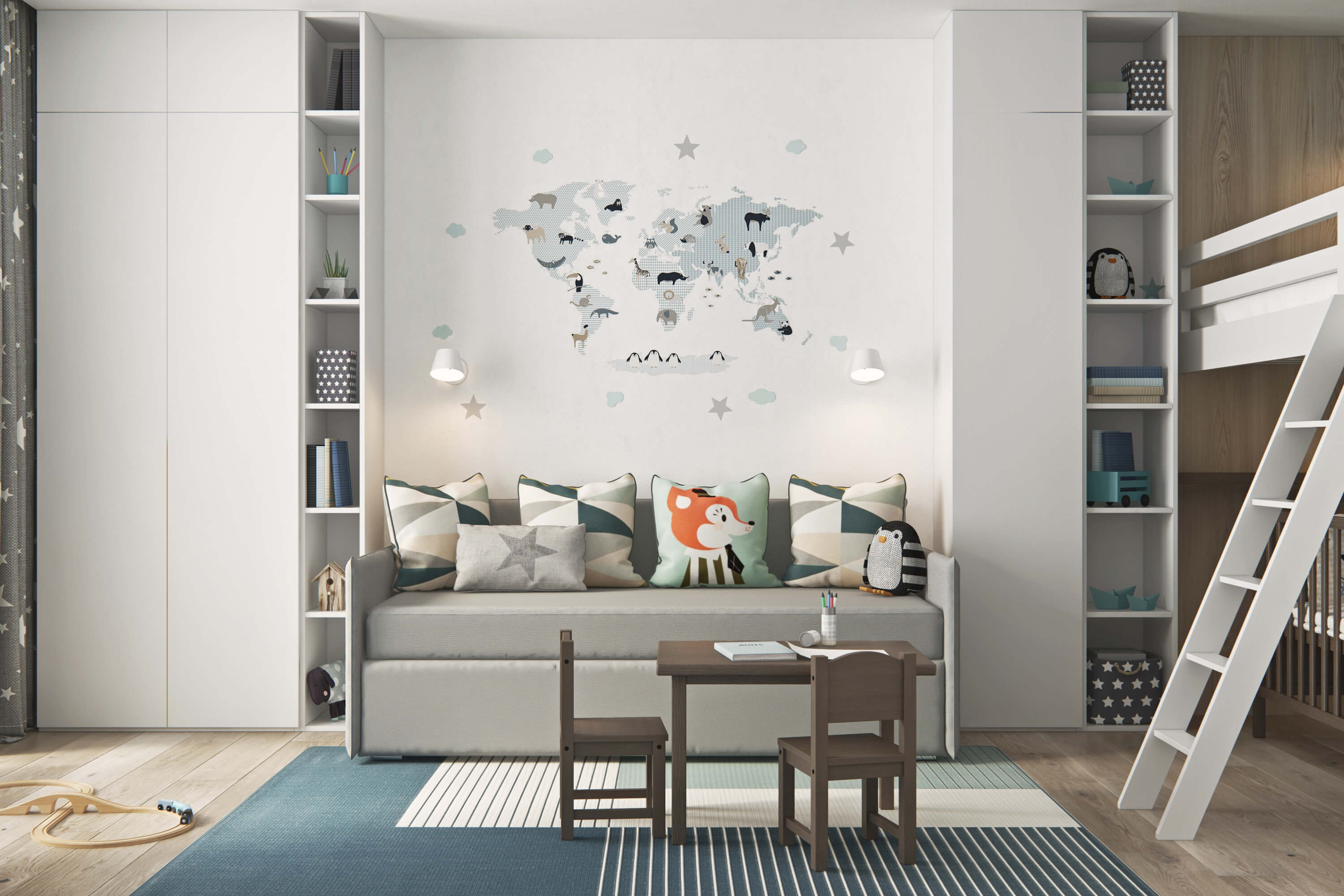 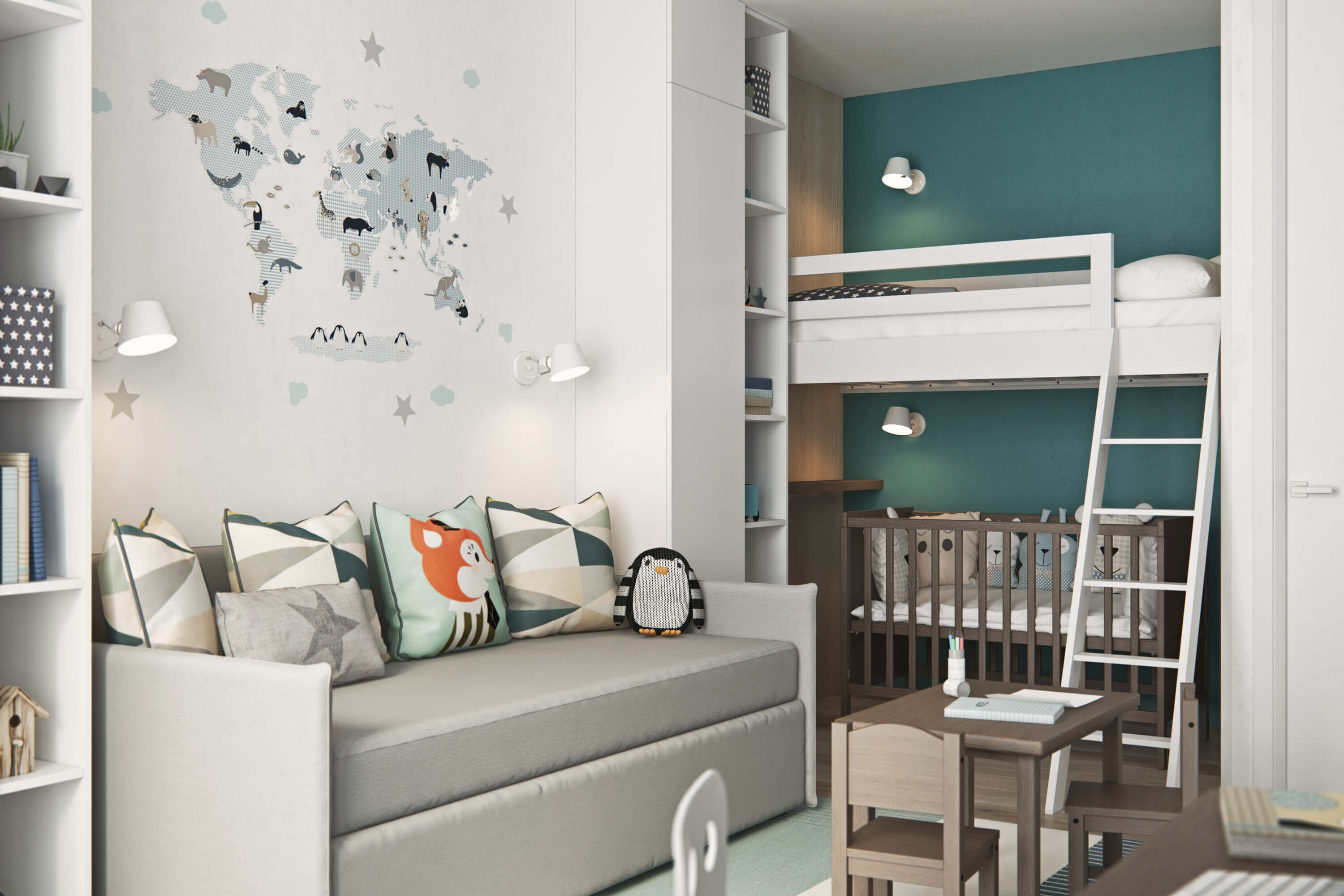 The sofa Stone in the living room we bought at the factory 8 marta Selecta. Cabinetry from IKEA and the bed with a storage place Brusali.

Textile in the interior is of neutral grey color, there is no bright elements, except children’s room, where we added blue color. 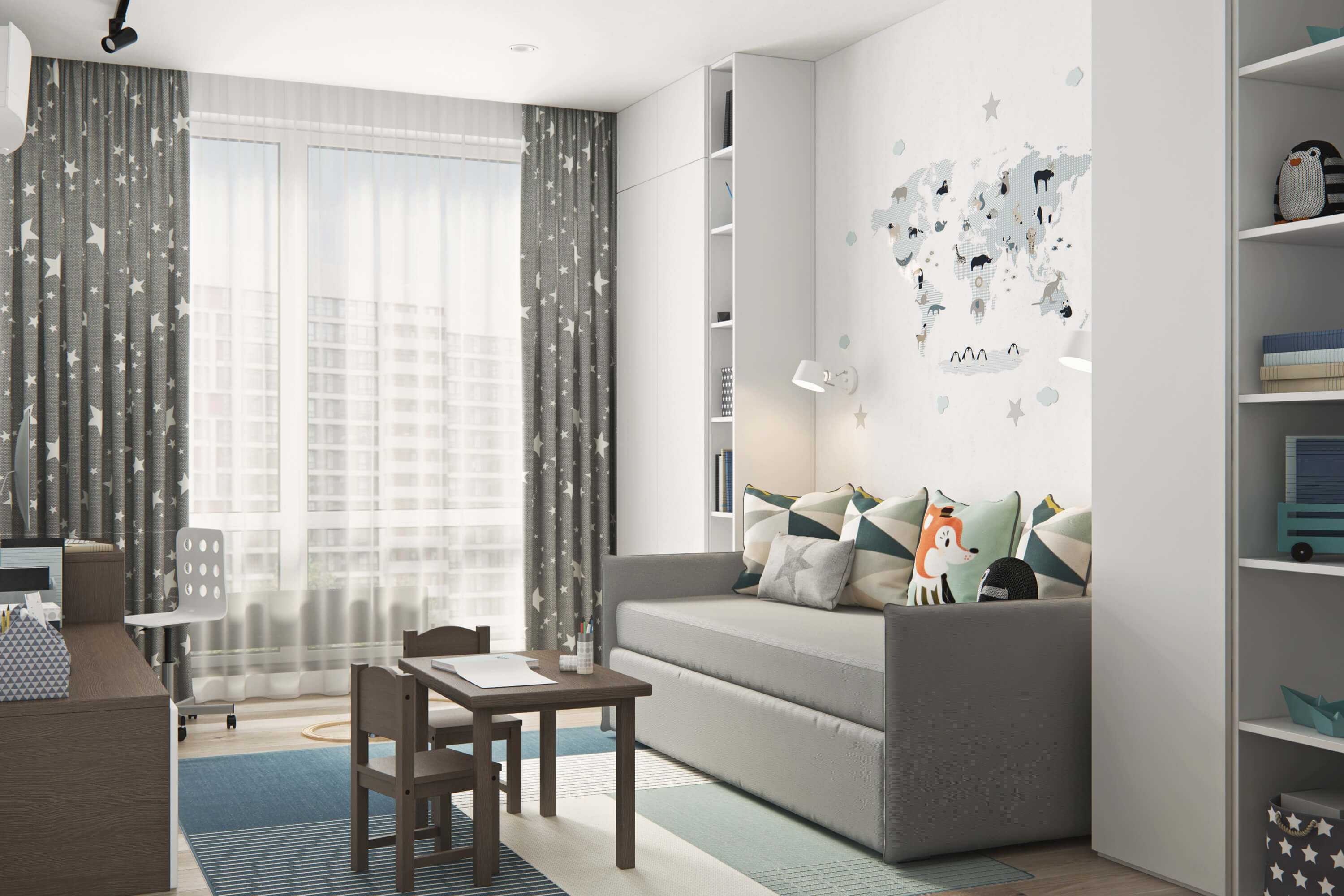 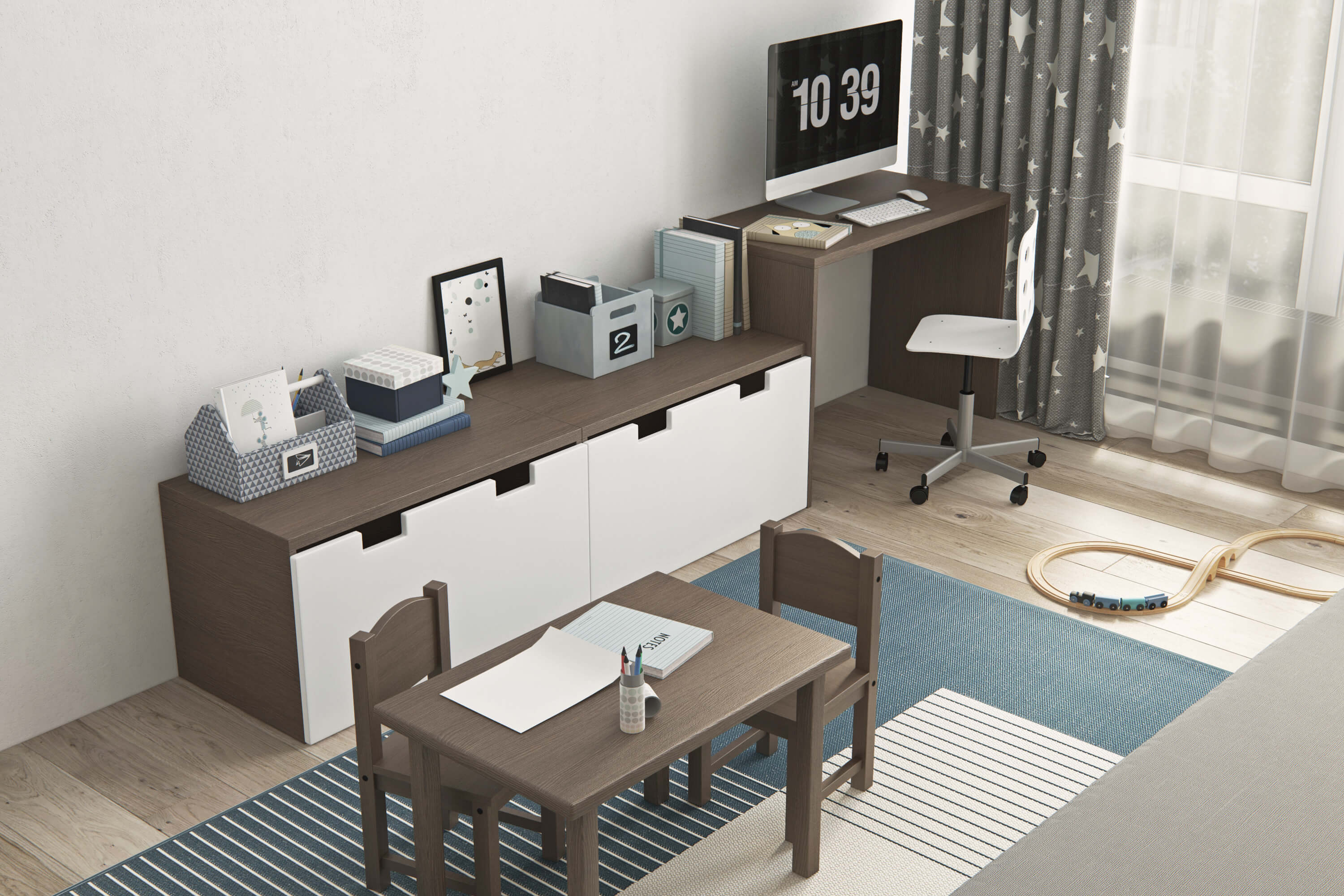 In this project there are minimum decorative elements, as it was the requirement of our clients. That’s why for the decor of minimalistic interiors mostly used furniture items. For example laconic crockery, lamps, and so on. Herewith, there is no odd things and this is an advantage of minimalism.

As it is an apartments, there were no complexities with approvals. But there is fire protection equipment on the ceiling, which couldn’t be moved. Complexities could appear during the repairs with bath installation in the bathroom. It is built into the niche, that’s why it should be installed in advance, strictly following the sizes. 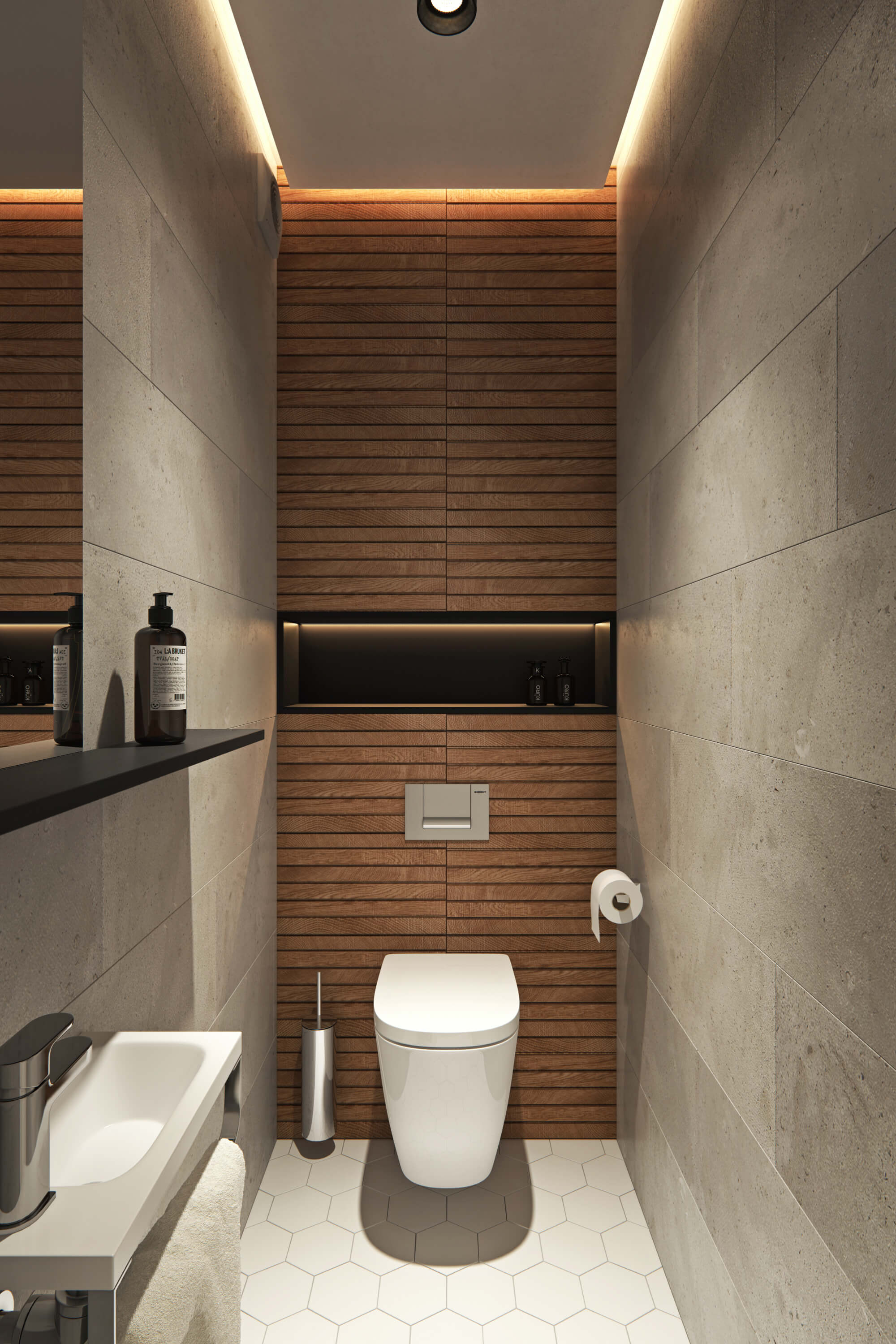 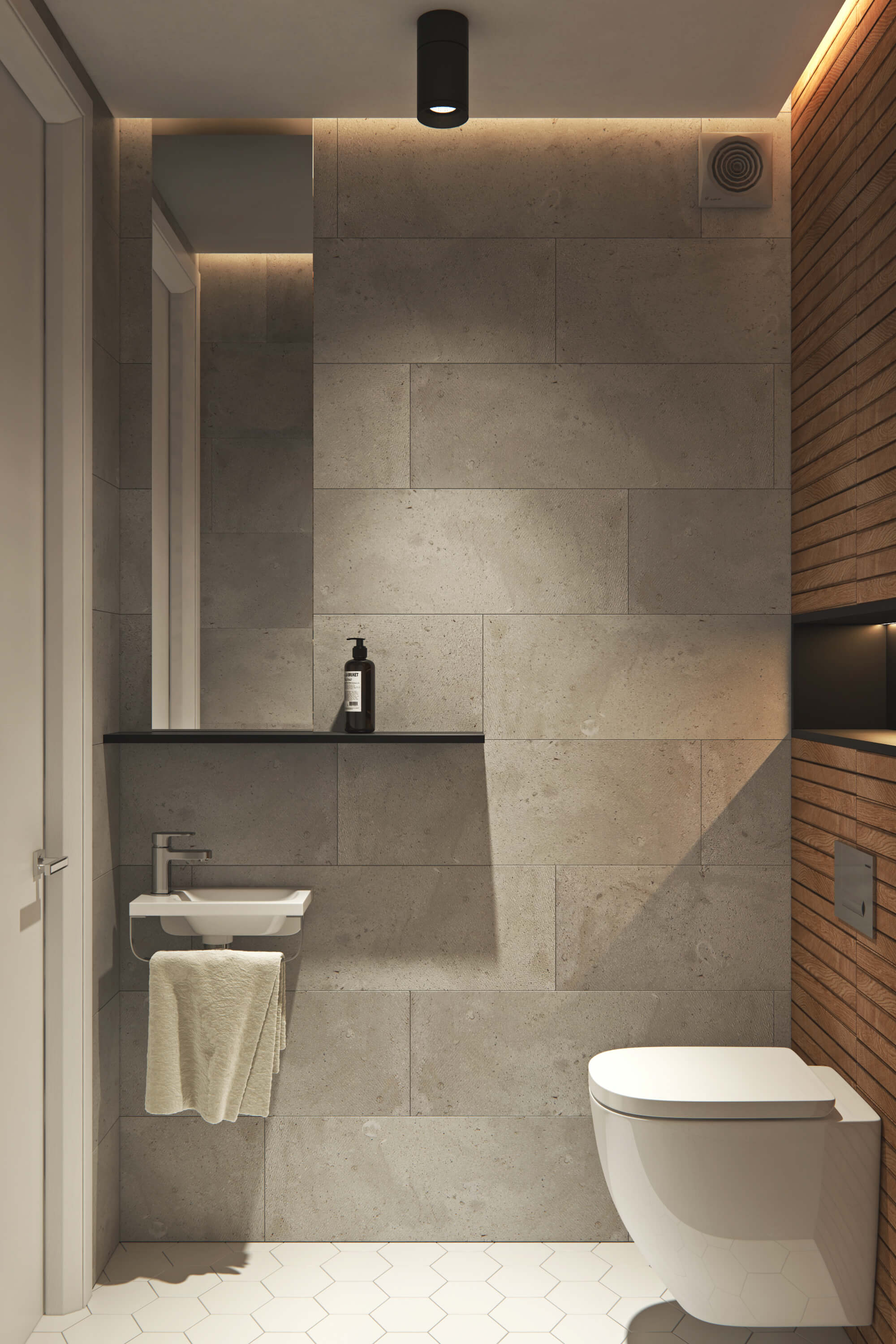 Project implementation for such floor space will be near 6 month. 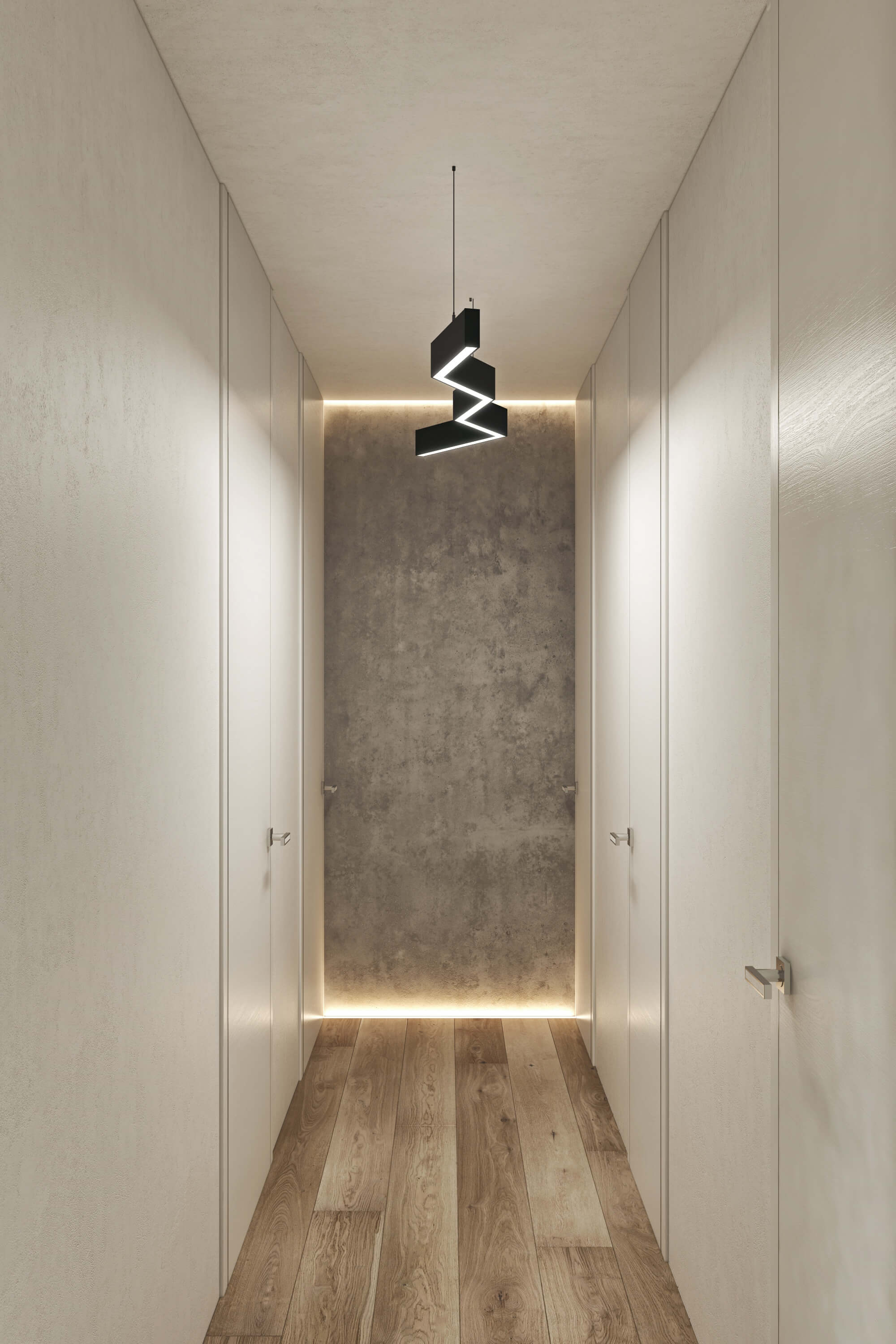 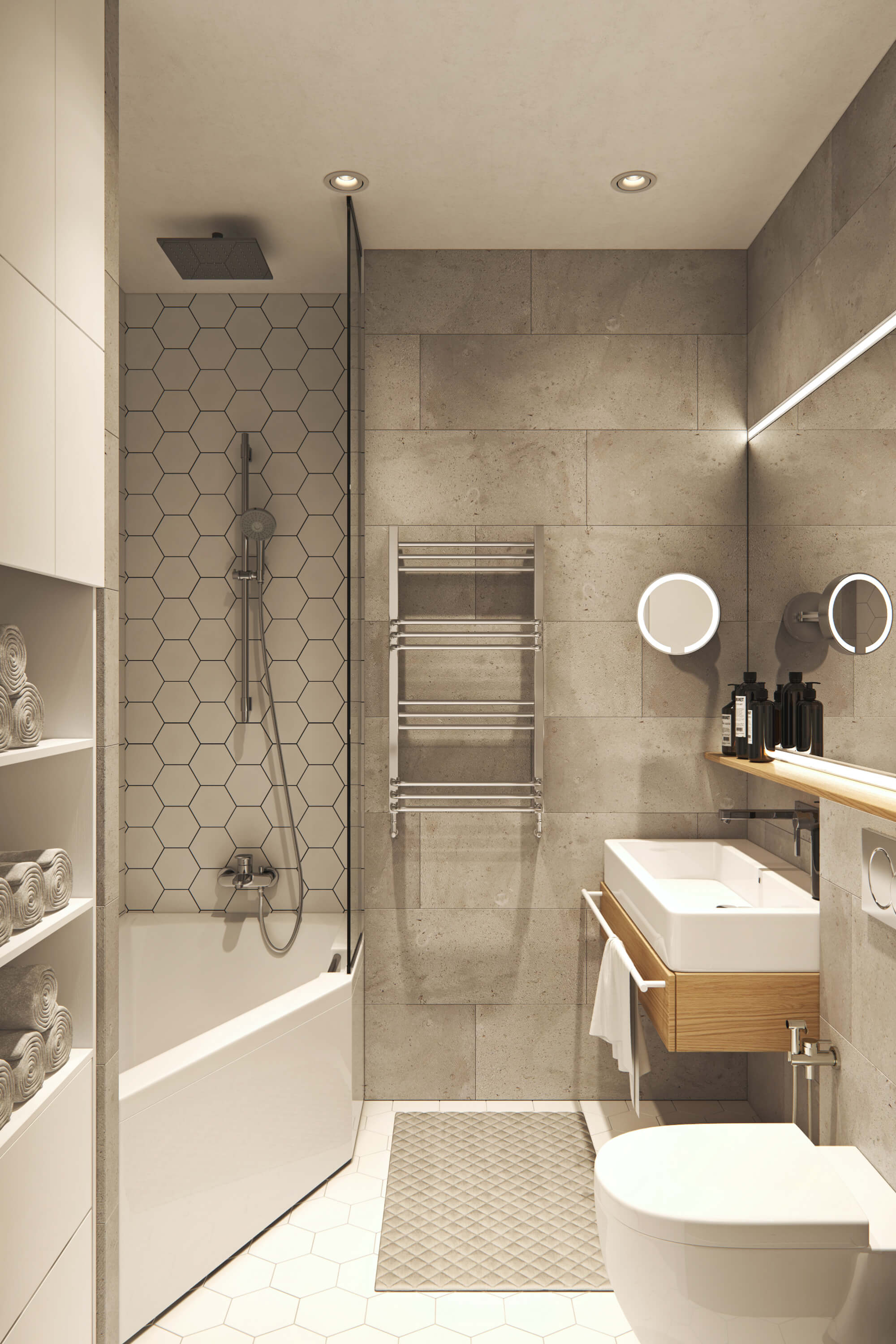 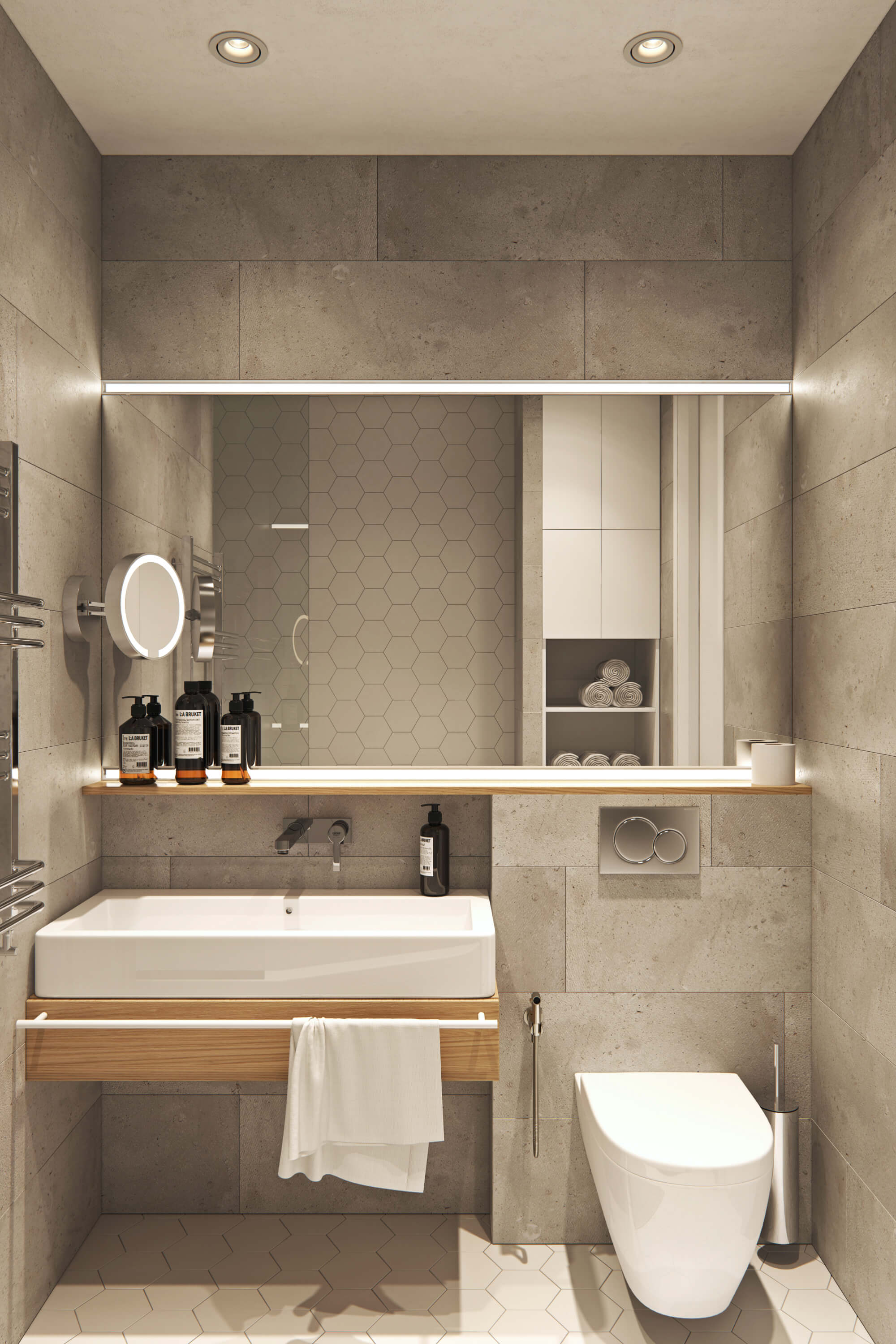