Tatlin Apartments — is a Residential development in Basmanny district of Moscow. Building of call-office in constructionism style of early XX century was re-thought and renovated for housing complex.

Now this building became incoming group of HC and over it there is an entire complex with a huge panoramic windows. It is divided into two blocks between which there is a space out of glass which creates the impression that house is levitating. 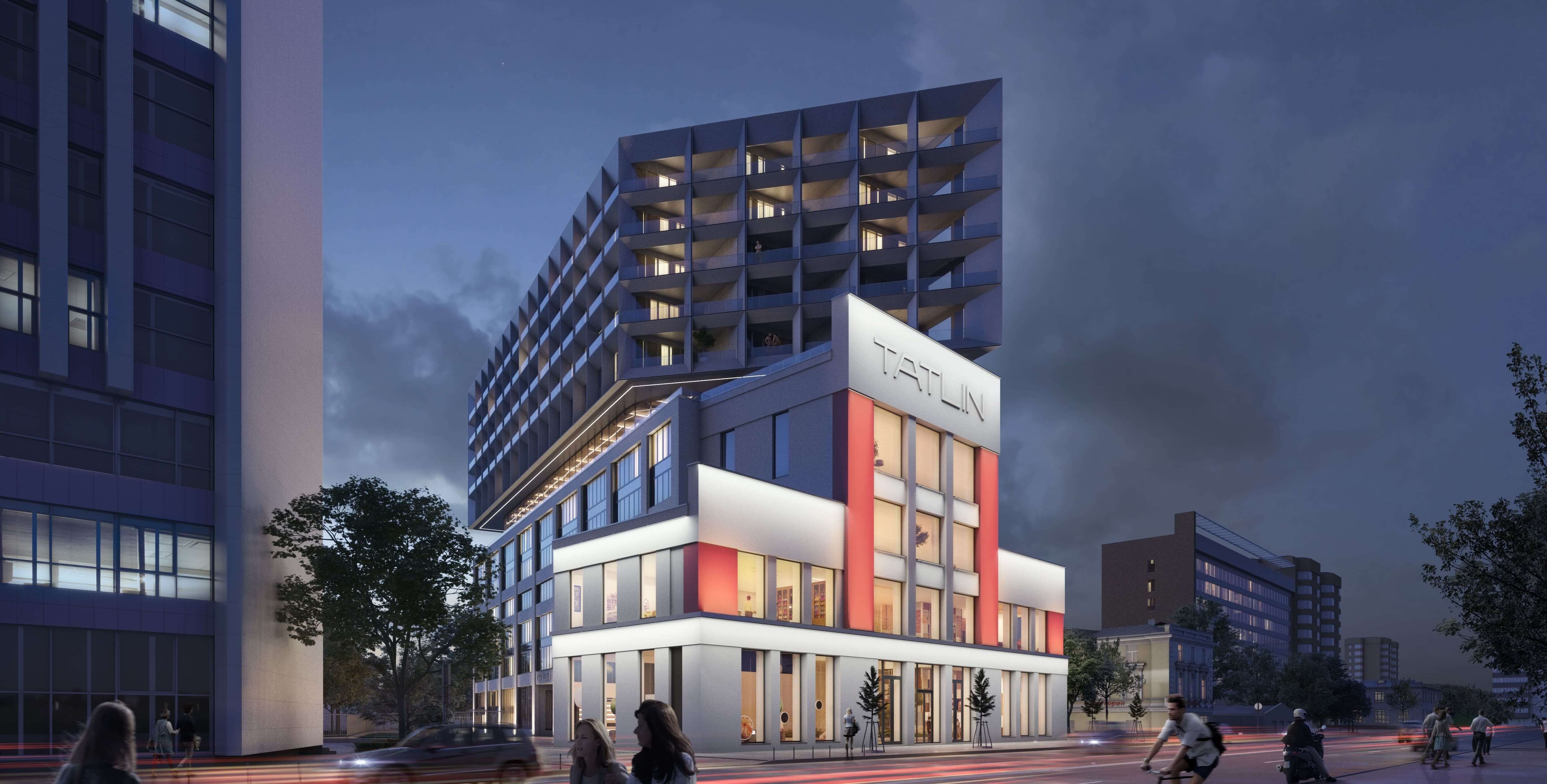 Architecture is a work of Architects of Invention — an international architect bureau which works in the field of contemporary architecture, urbanism and cultural analysis.

Our studio developed interior design projects for this Residential complex, which in the future will be implemented with finishing.

In this Residential complex there is full town with its own internal infrastructure: restaurants, cafes, huge sports area, outdoor cinema, park, co-working, place for rest and quite zones, where you can read. Notably it is town inside the building, interiors of which was implemented by our studio.

The objective of this interior is to organize internal infrastructure and comfortable space for complex’s dwellers. Here we organized sports-grounds, rest zone, co-working, open-air cinema and mini-open park for comprehensive leisure activities on the complex’s territory and entertainment. 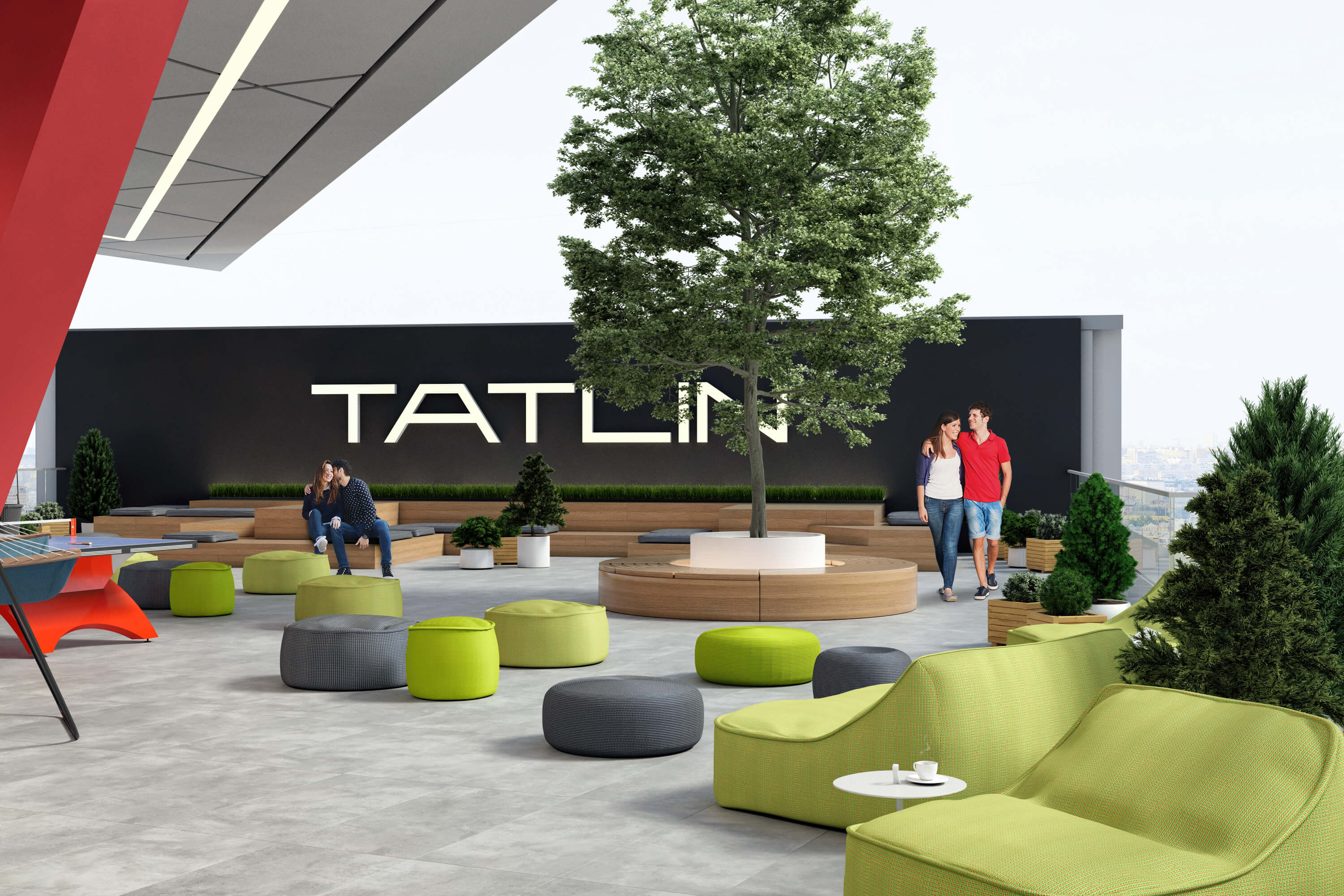 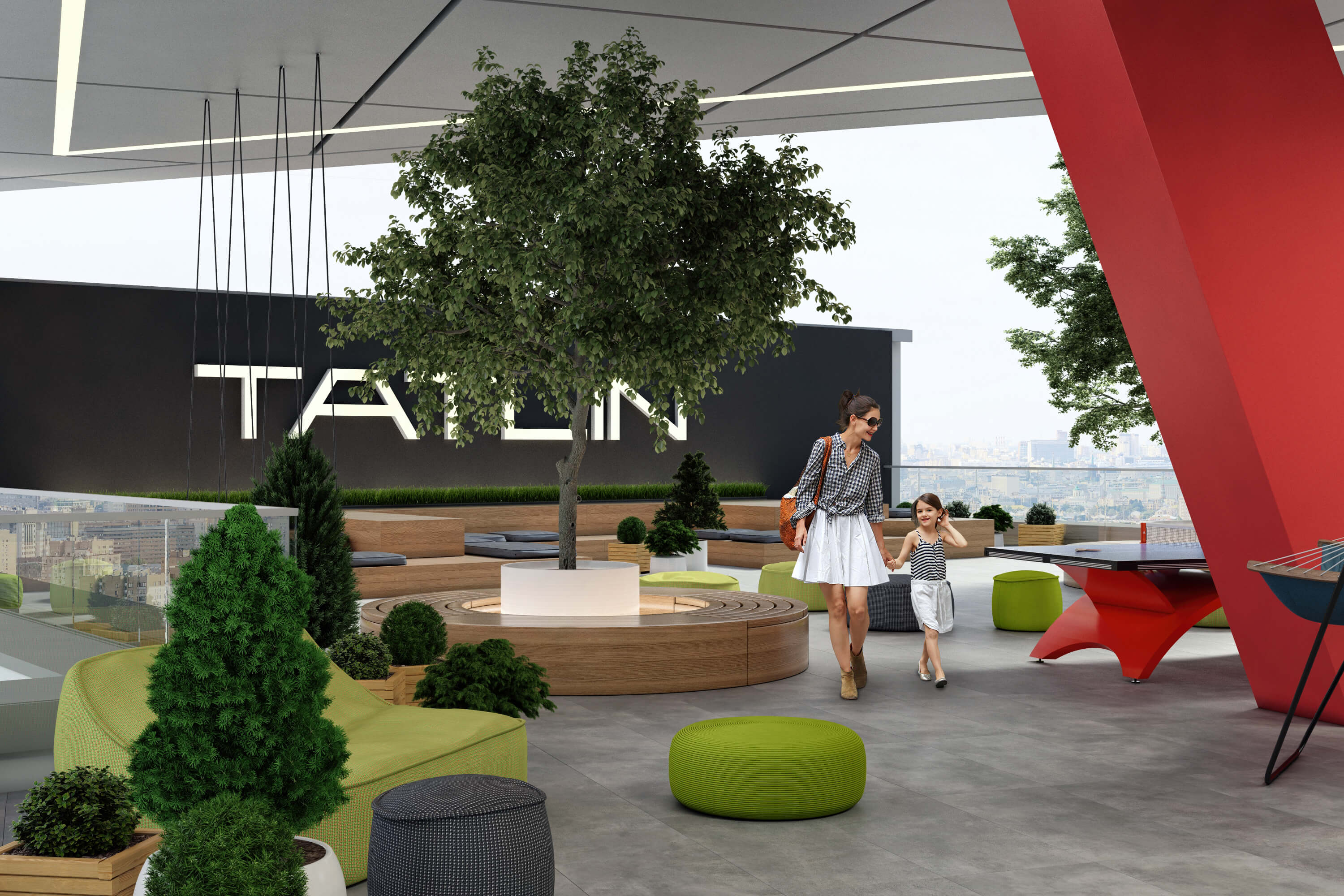 The project is called ‘Interior garden’ as initially in architectural design it was planned to use a lot of internal landscaping and also to create internal park. We adjusted project to dwellers demands of Moscow citizens and created space, where there are table games, garden-houses for companies, quite zones for privacy, where you can work or read a book. Also there are playground and sports area.

The most spacious space is sports area and playground. Key criteria for this zone was safety, there is defined distance between fitness equipment and amusement rides which should be followed. We though trough how the processes will take place for everything to be comfortable and safe. We wanted that the person while exercising in the sport area, was able to observe what is happening on the playground. Also on the opposite side of the playground there are bunches where the parents can rest while looking after children. 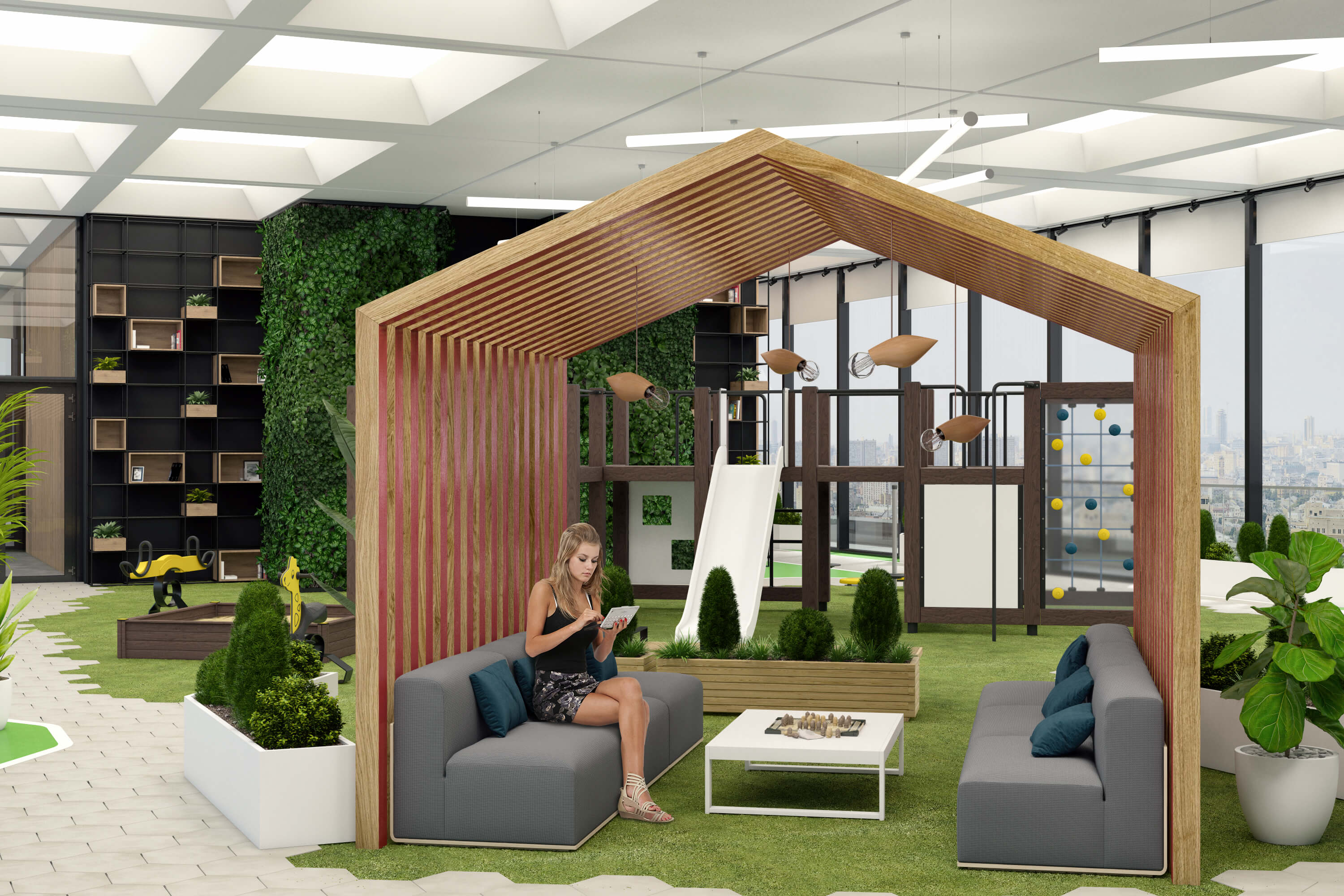 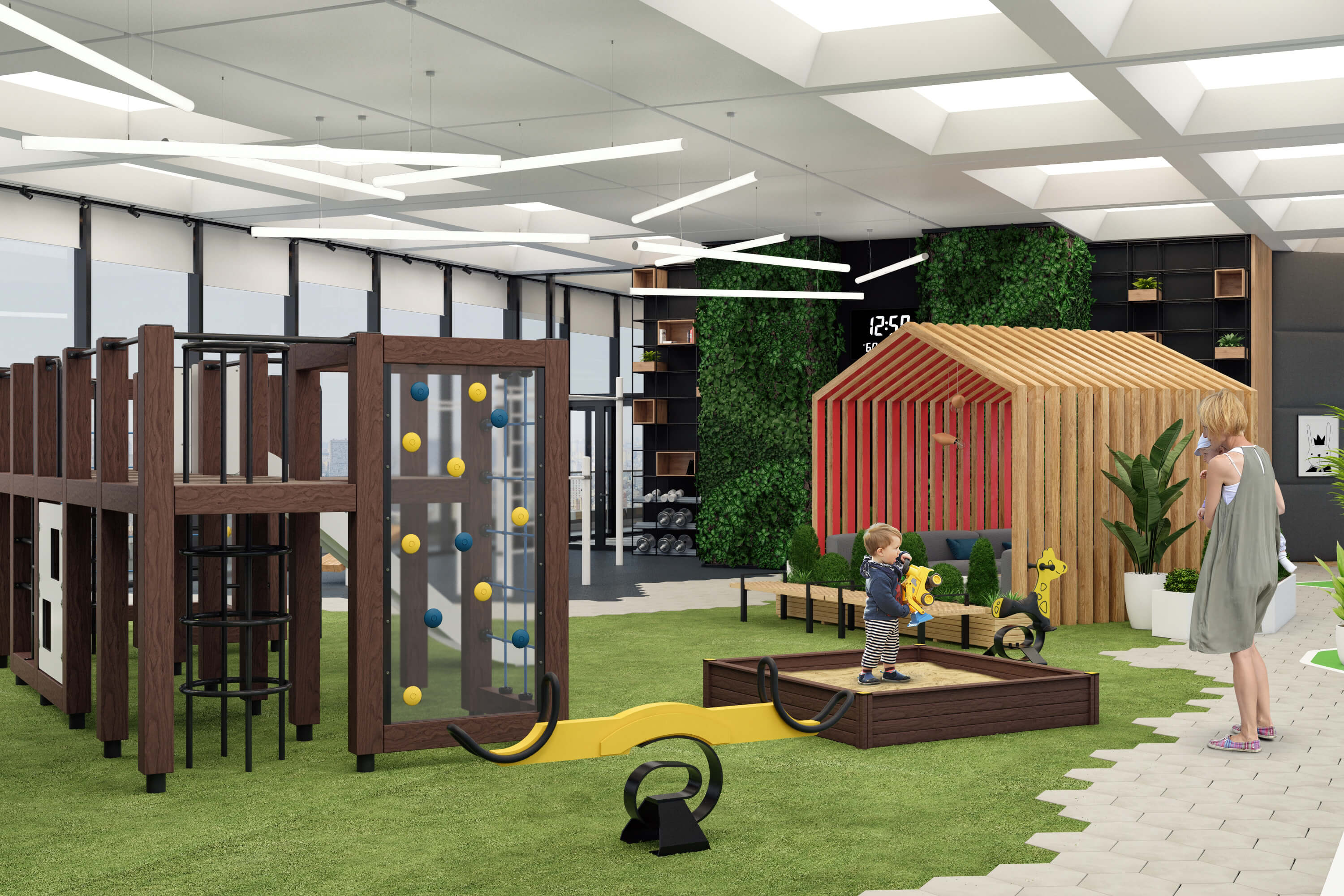 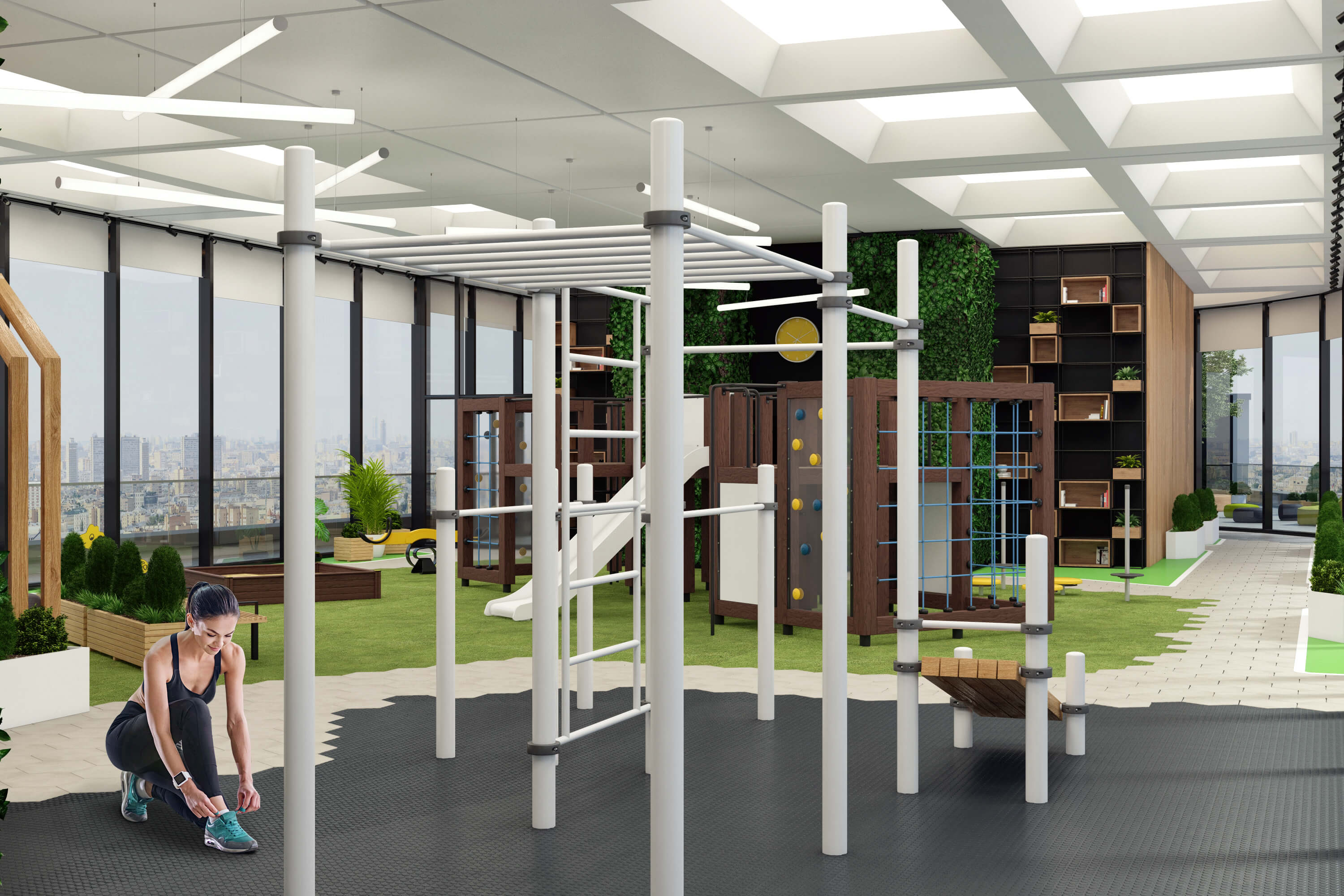 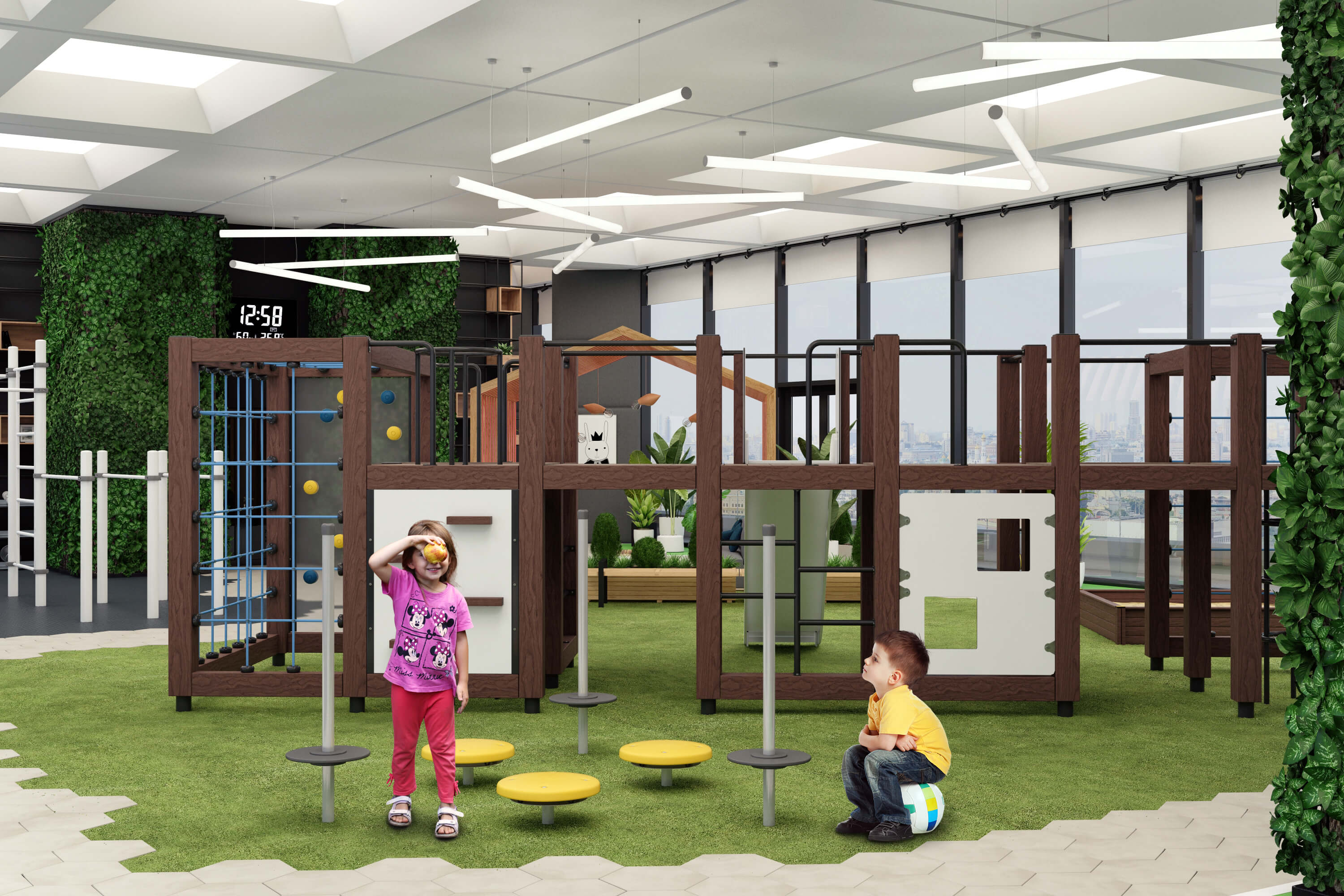 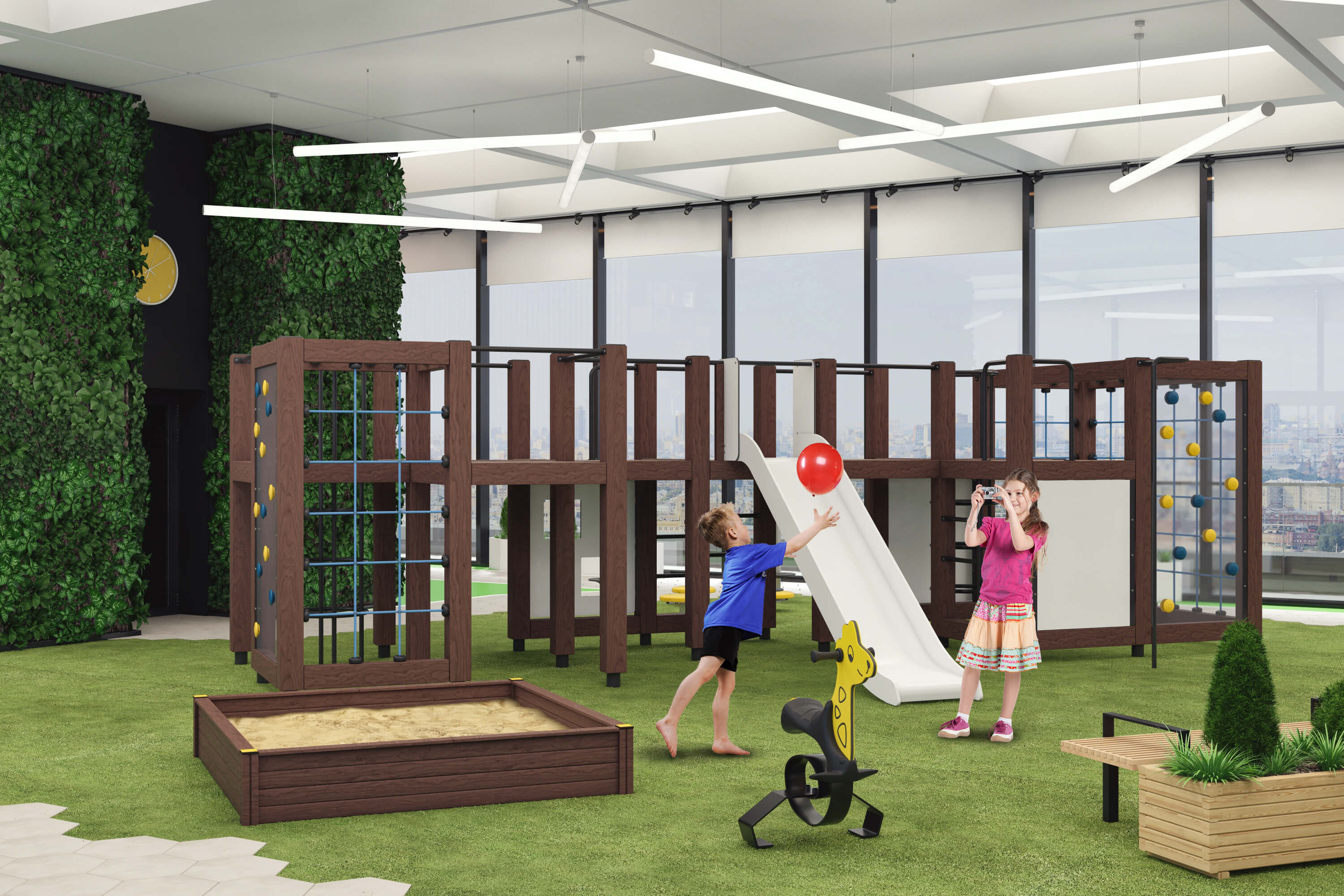 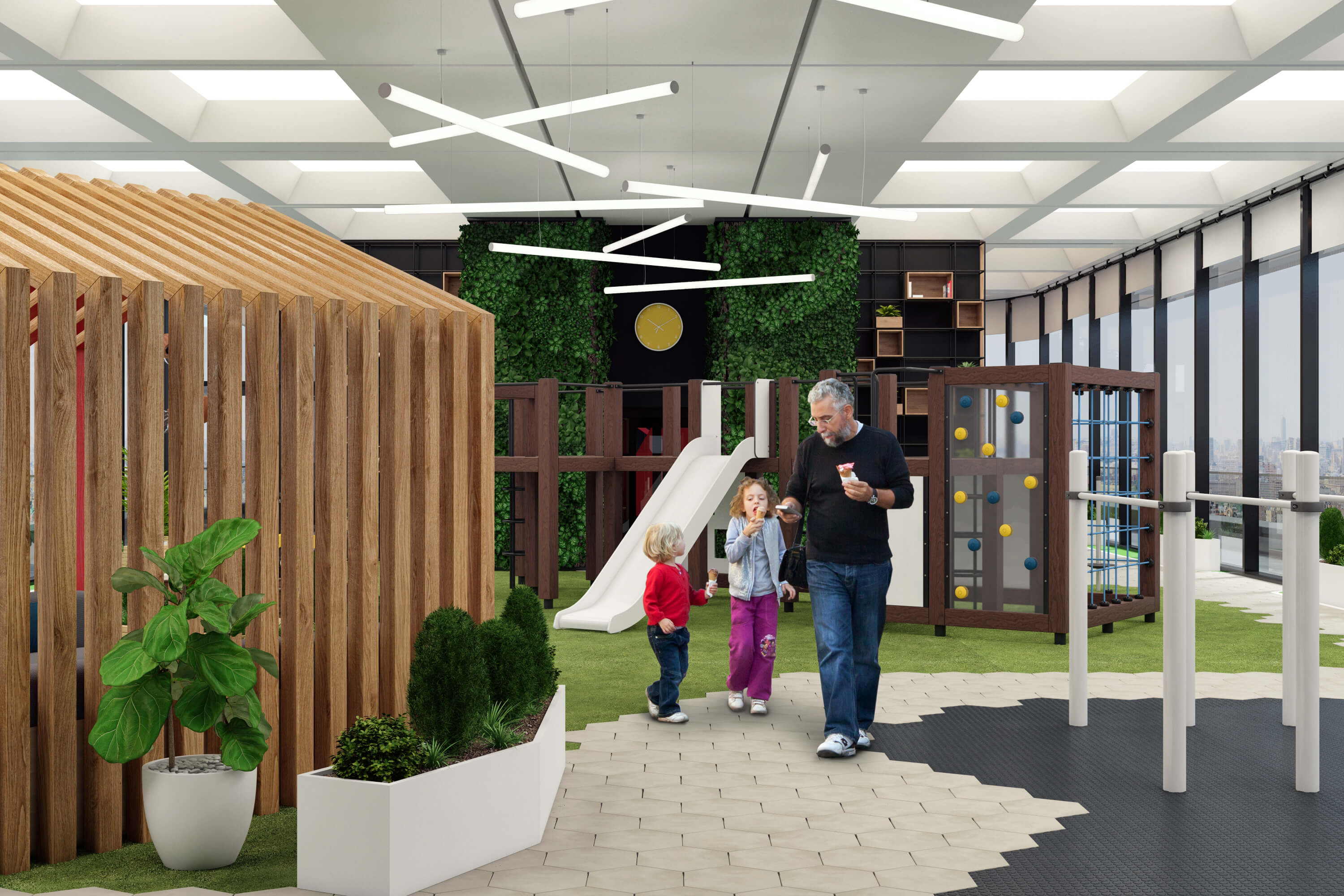 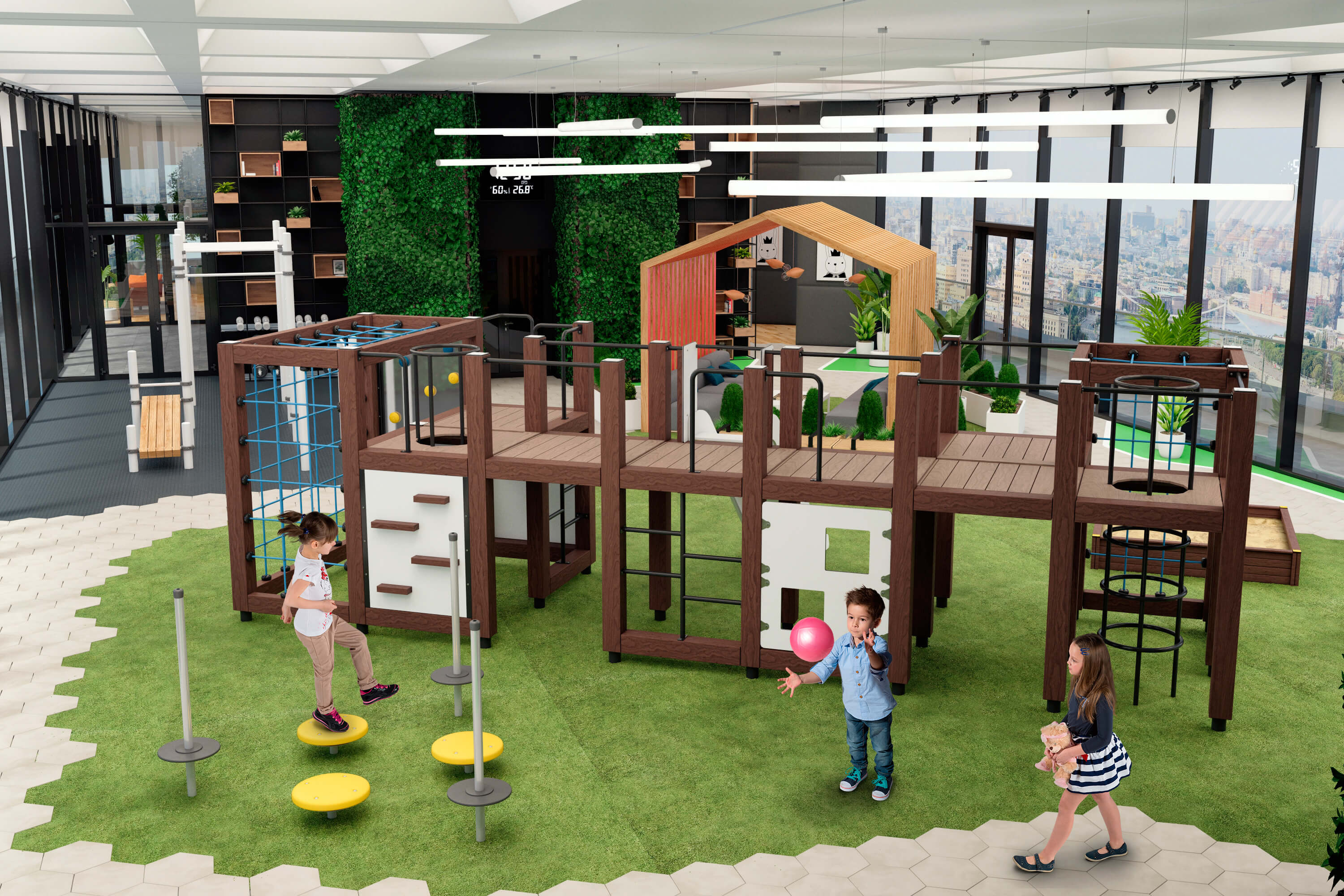 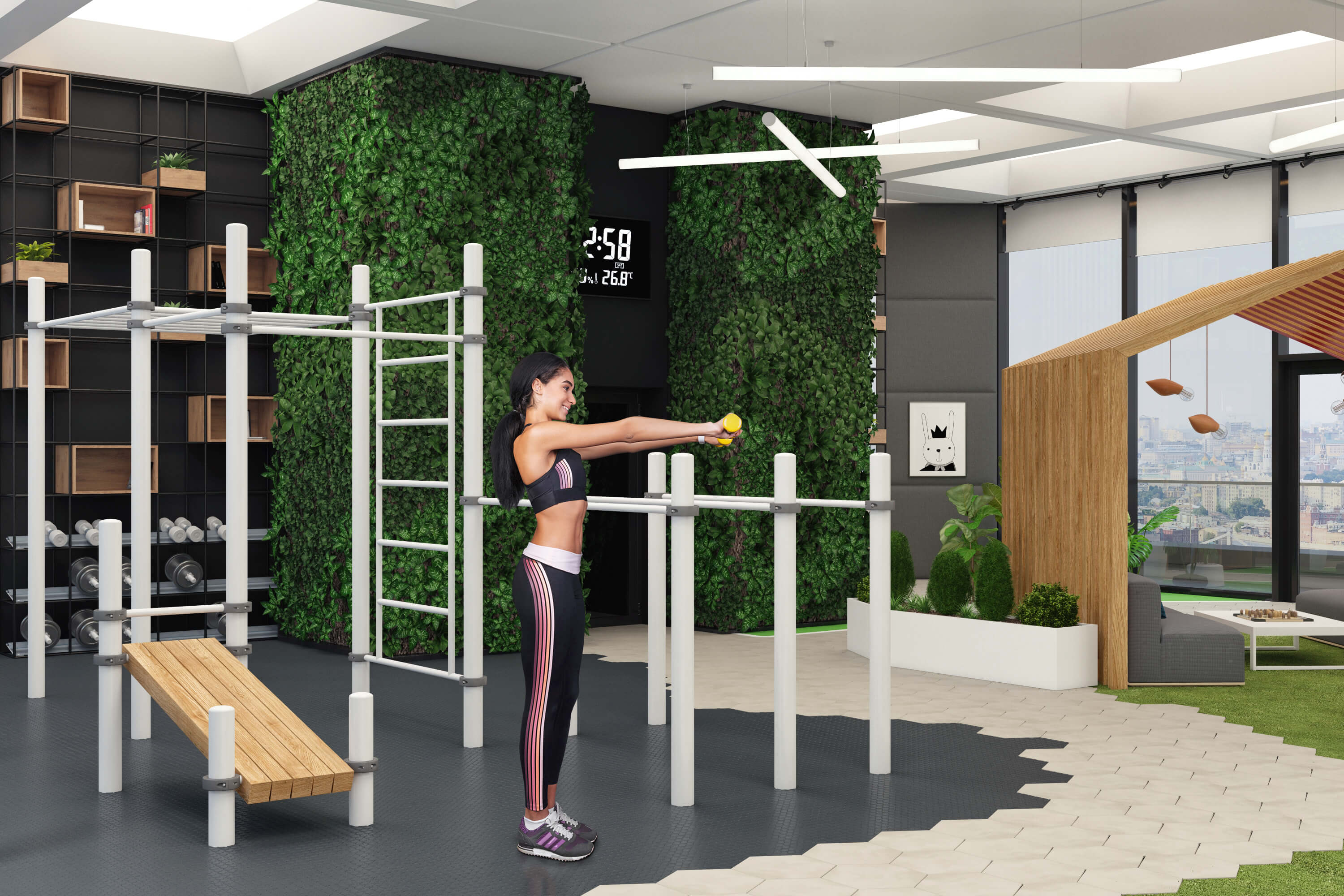 Zoning was done by the means of tile. We chose safe rubber soft coating, which prevents injuries. Divisions in the form of passages we did in the form of cells tile from ceramic granite, therefore adding harmony to the interior and uniting it with the concept of common facilities.

Elevators zone divides the space on zone of big public terrace and quite zone from another side. The column itself and elevator shaft are emphasized with greenery wall represented by plants, growing on the wall and stabilized moss with automatic watering system. Hence we remotely live up to ‘Interior garden’ name.

Objective of the quite zone is to create space which would be noise-isolated from public zone and zones where children play. That’s why children’s zone is placed from street veranda’s side, so that sounds won’t enter the quite zone. In the quite zone there are racks with the books, which are visually dividing the space into small zones. The racks themselves are representing functional zone as books are placed there, you can charge equipment there, and each rack has poufs and tables with armchairs. Soft poufs could be moved together for gathering with friends. 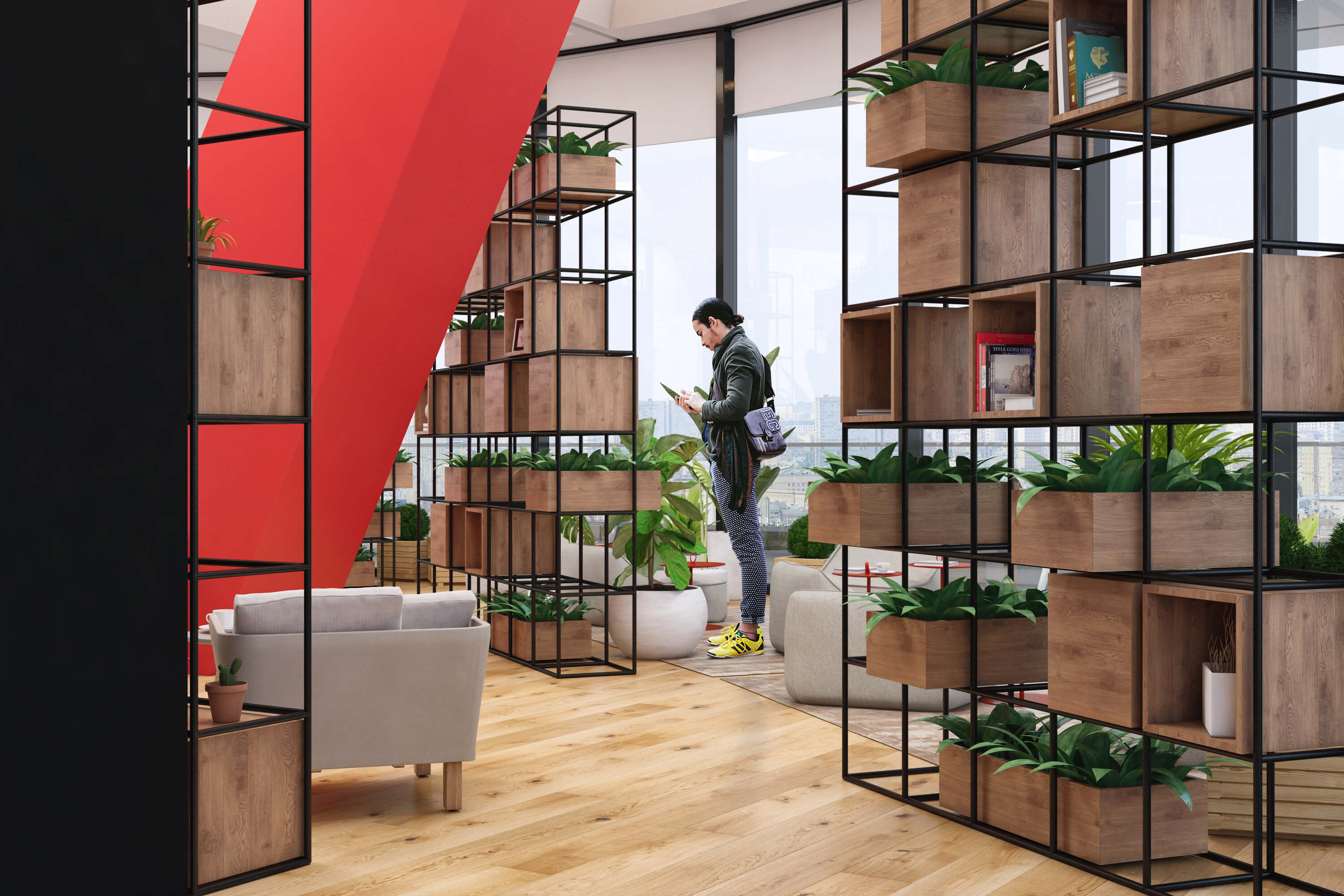 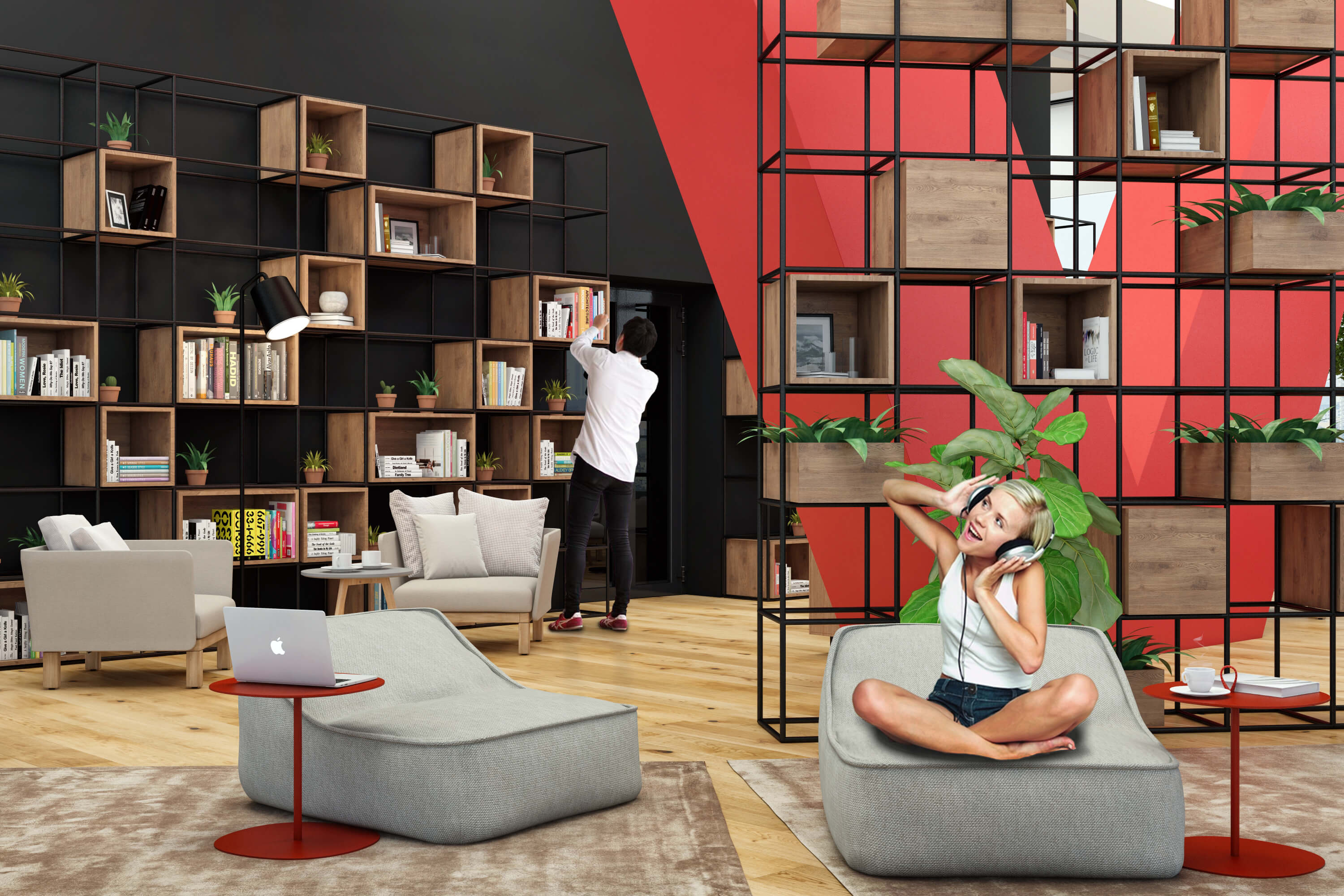 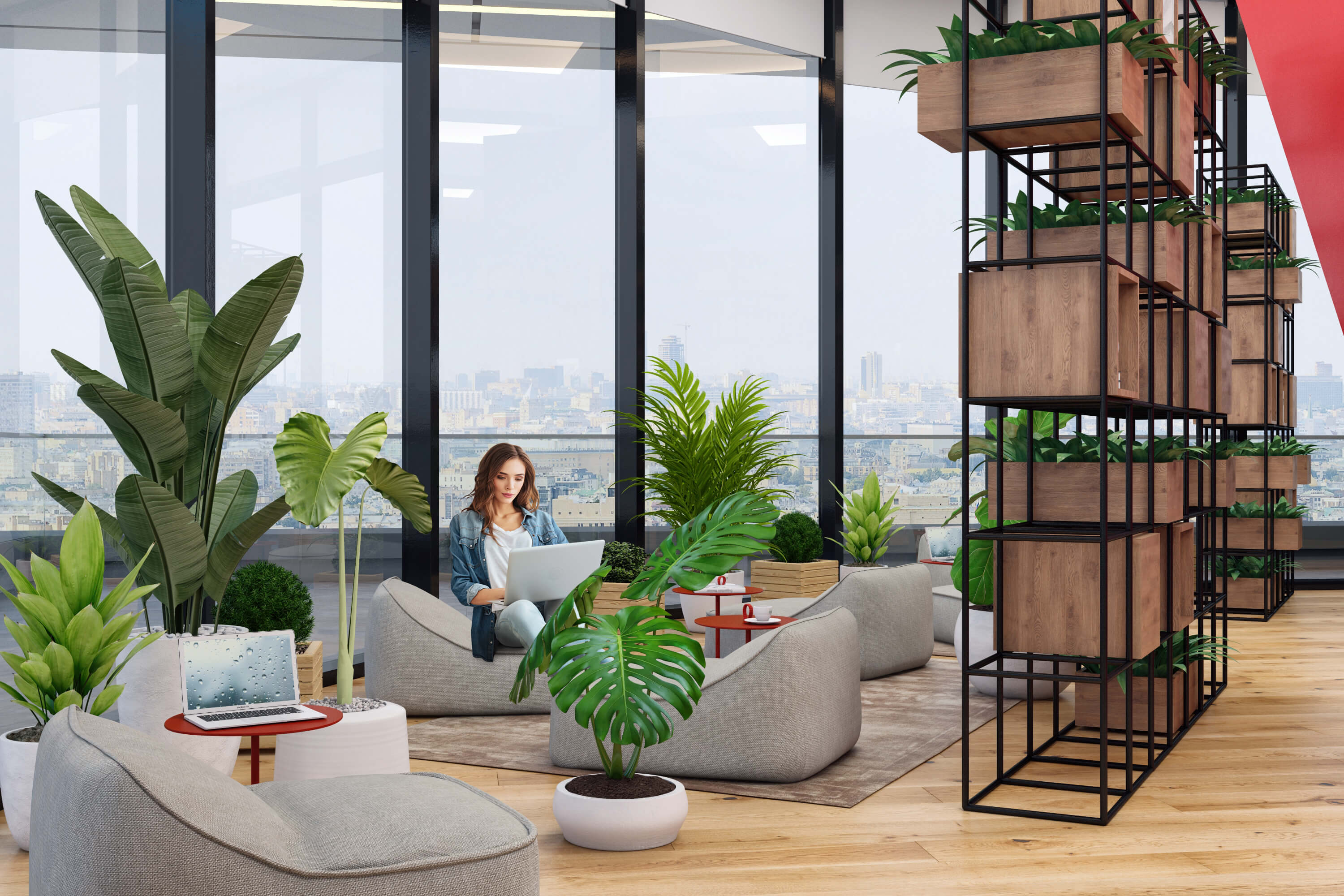 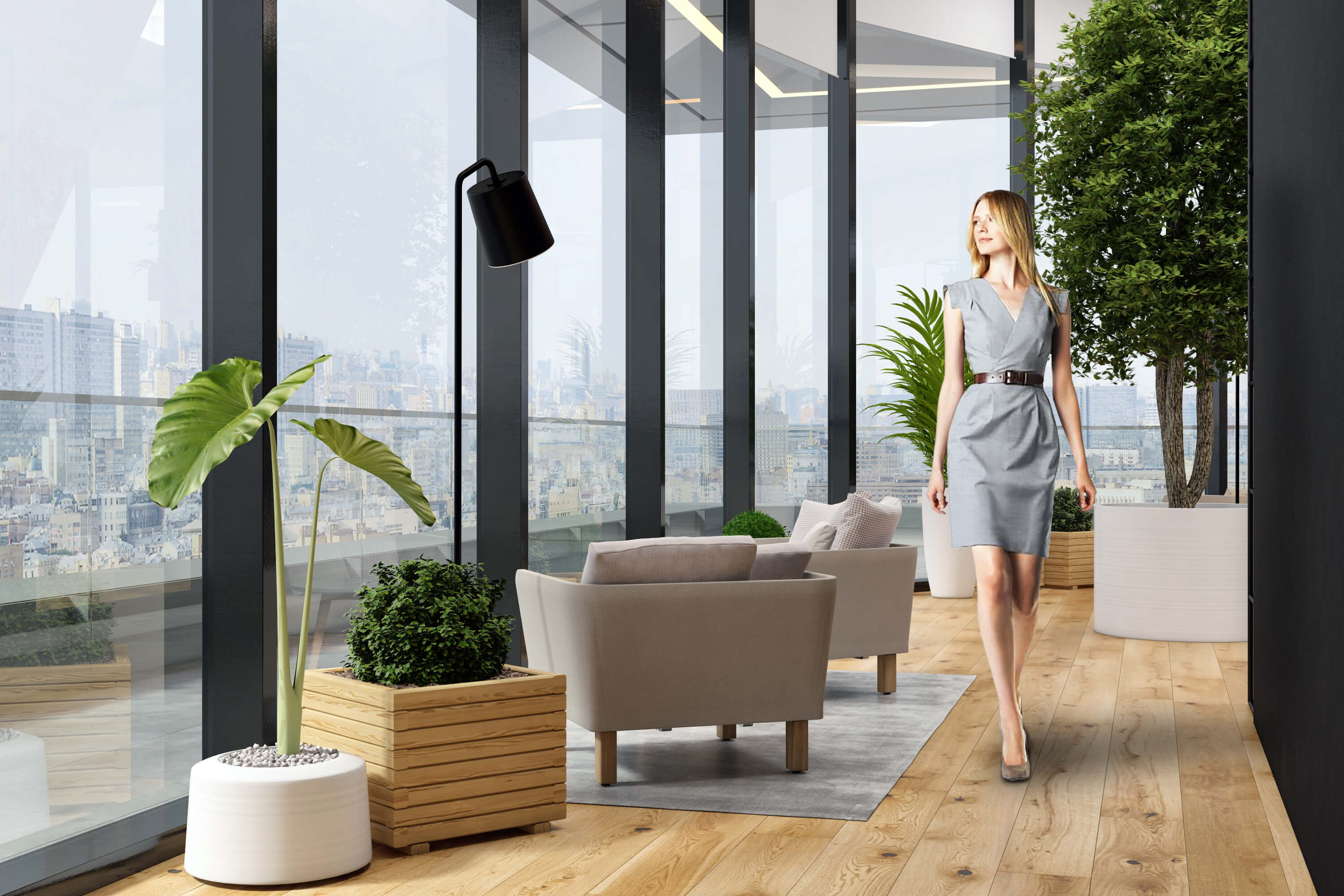 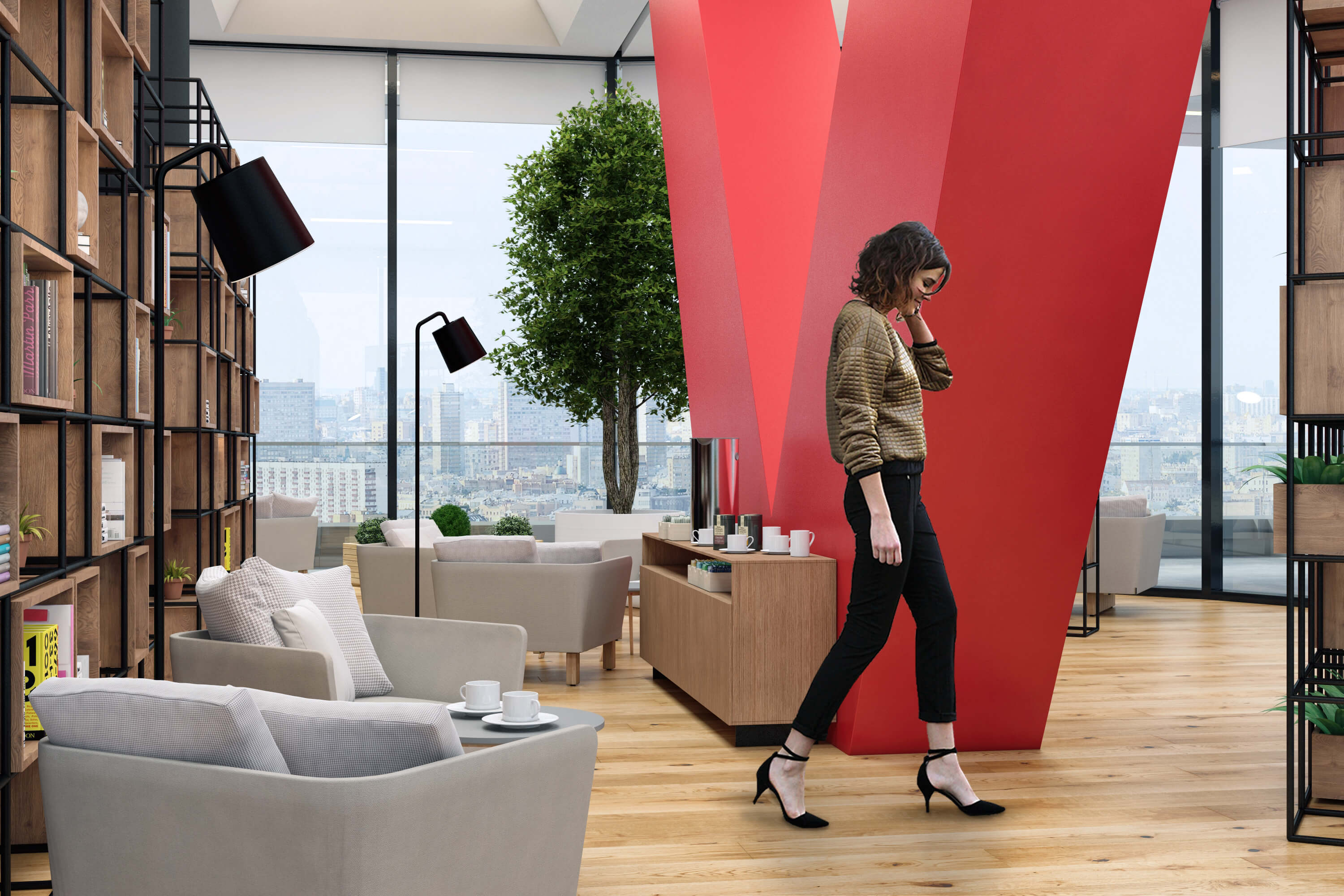 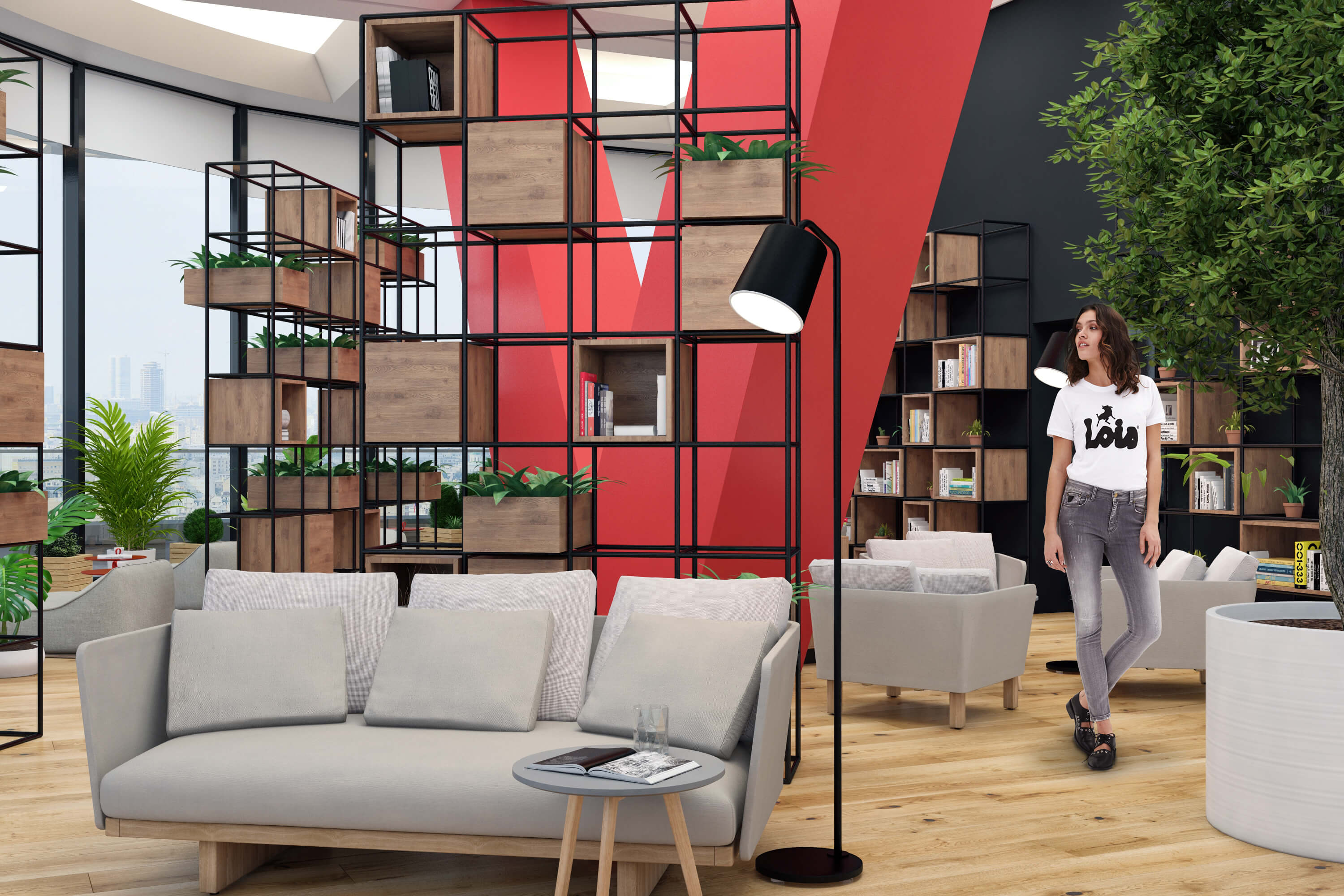 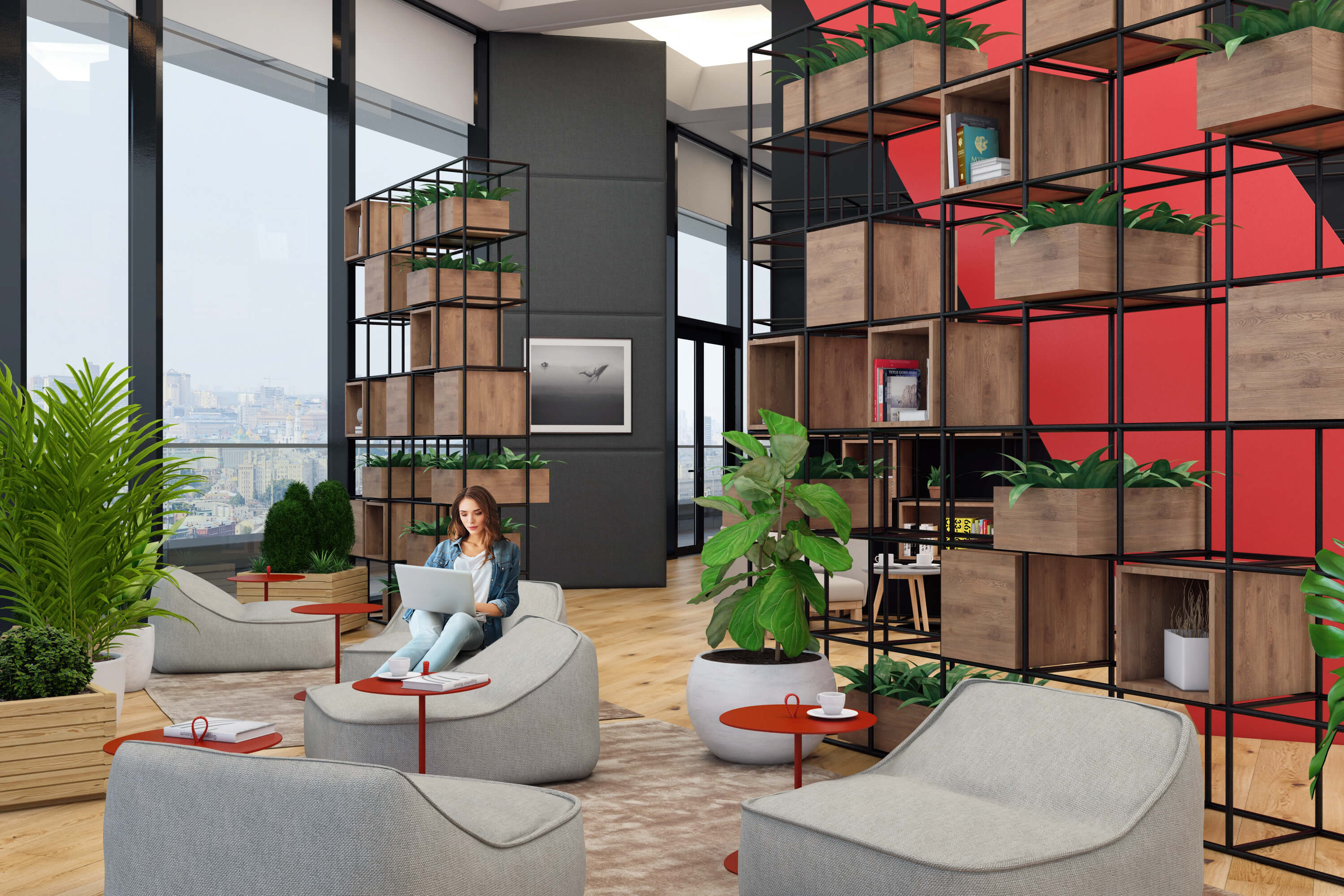 On the way from public zone to the rest zone there are high soft panels with pictures where posters and information for dwellers will be displayed.

Park zone of the street veranda

We called this zone park as it reminds contemporary Moscow parks. Multilevel constructions are organized here, benches, where it will be comfortable to sit and talk with friends or sit alone and read. These benches are used for sitting while watching the film in the open-air cinema. Projection screen is built-in to the building construction and moves out during the screening. 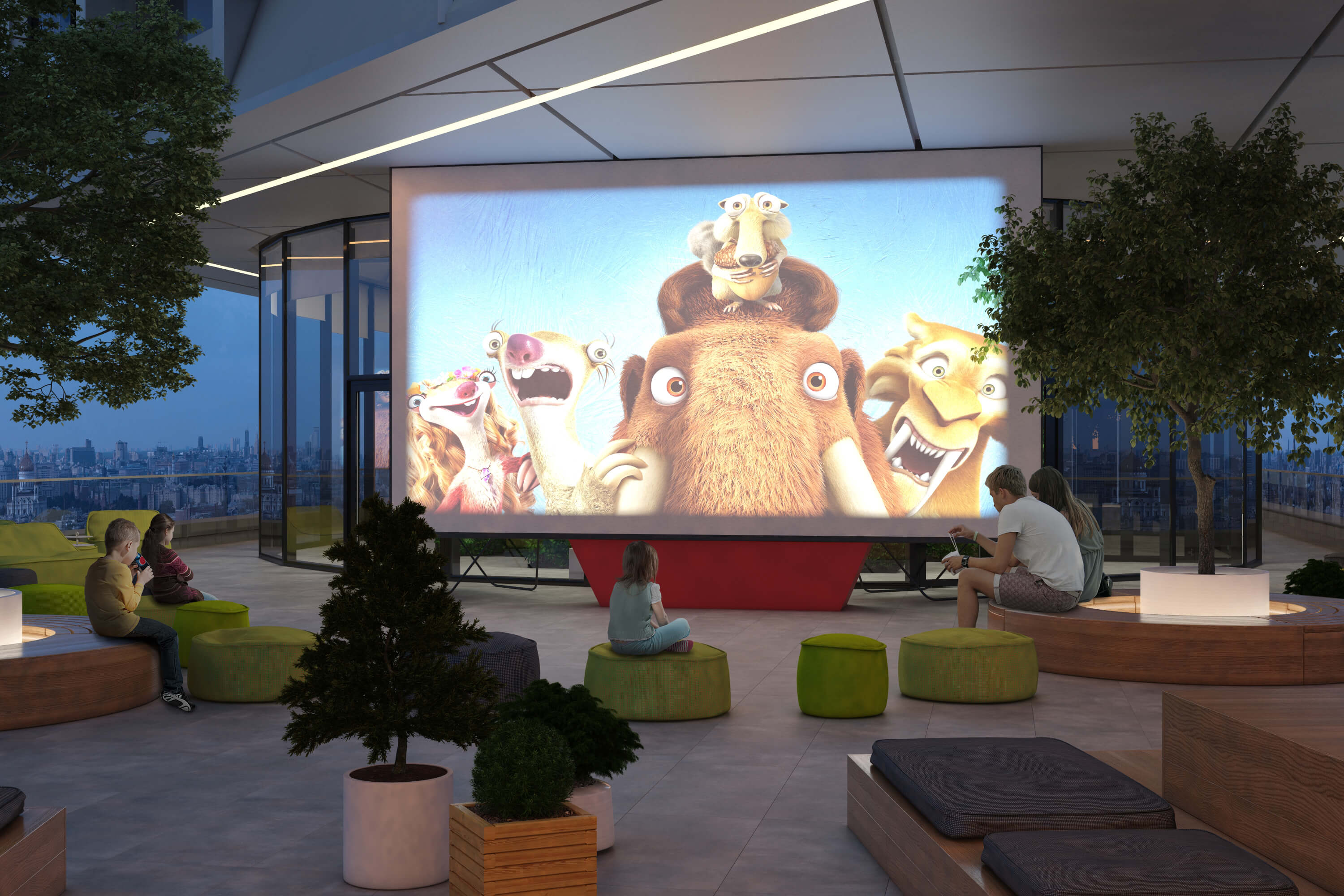 Here also we placed tennis table for active actions, sling-chair for rest. Also we organized live plants for floor cover represented by trees which will be planted on the veranda. We created contemporary atmosphere of the park for dwellers to have an impression that they are really in the park while staying indoors of the residential complex. This interesting contrast creates combination of nature and urban building of the city. 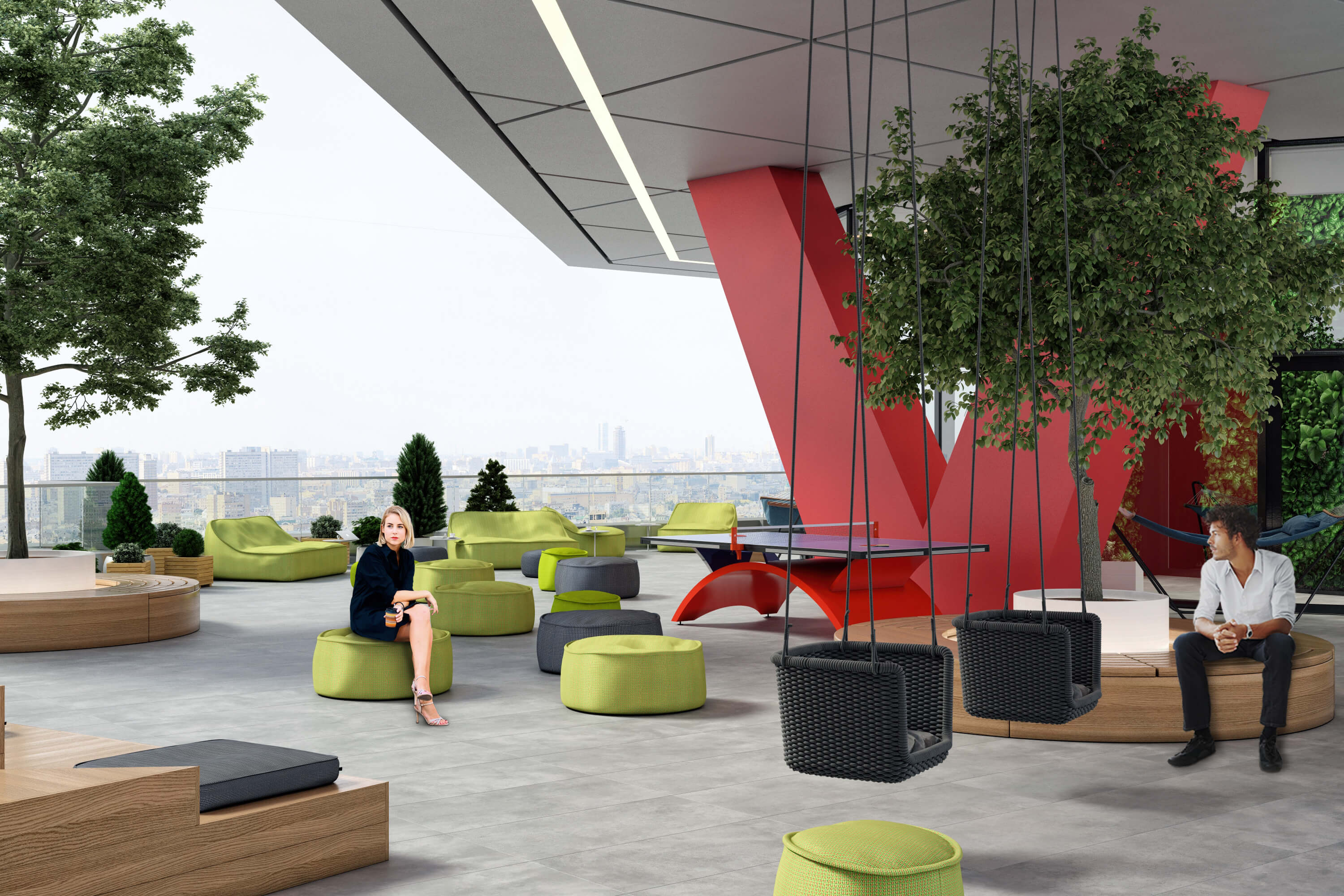 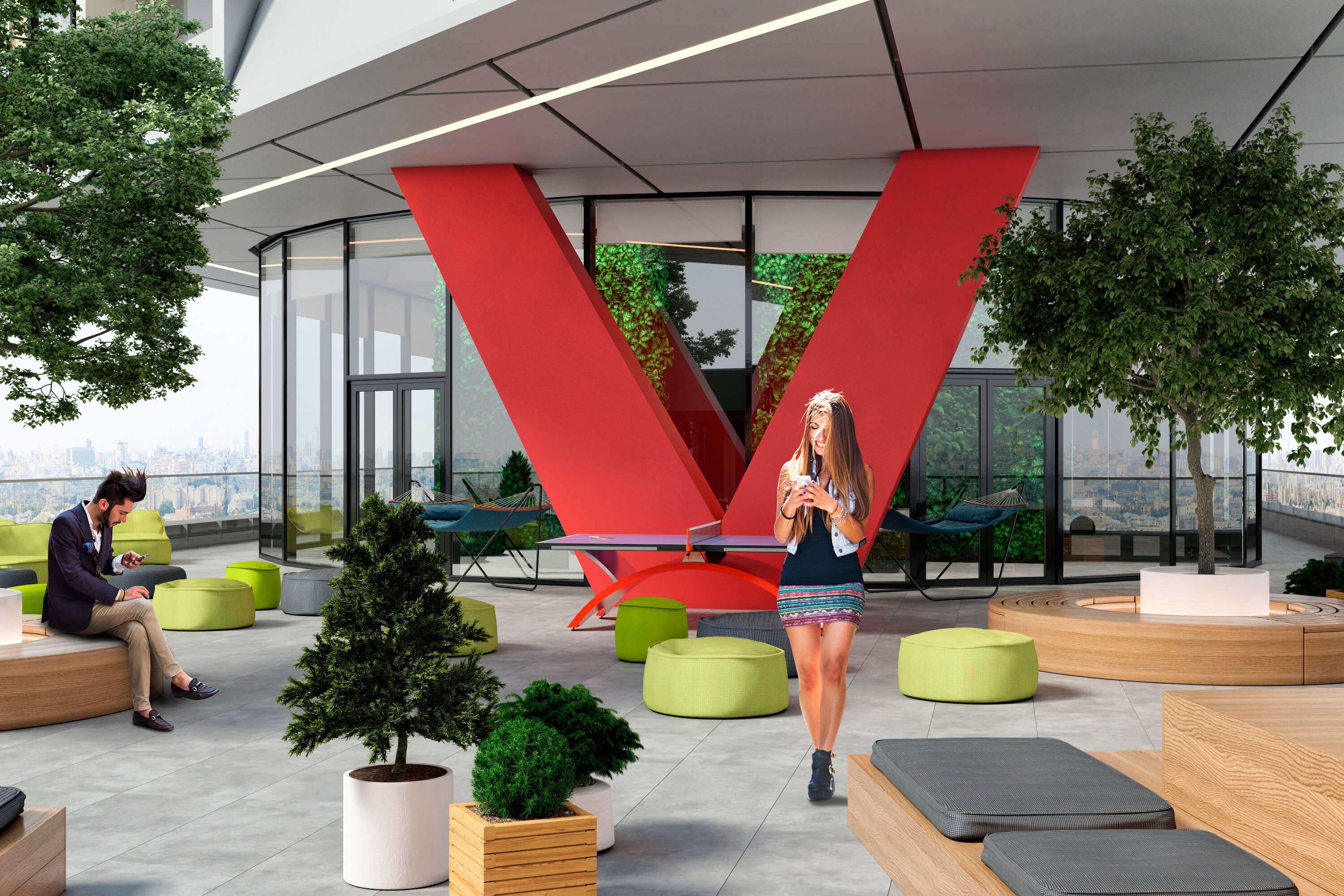 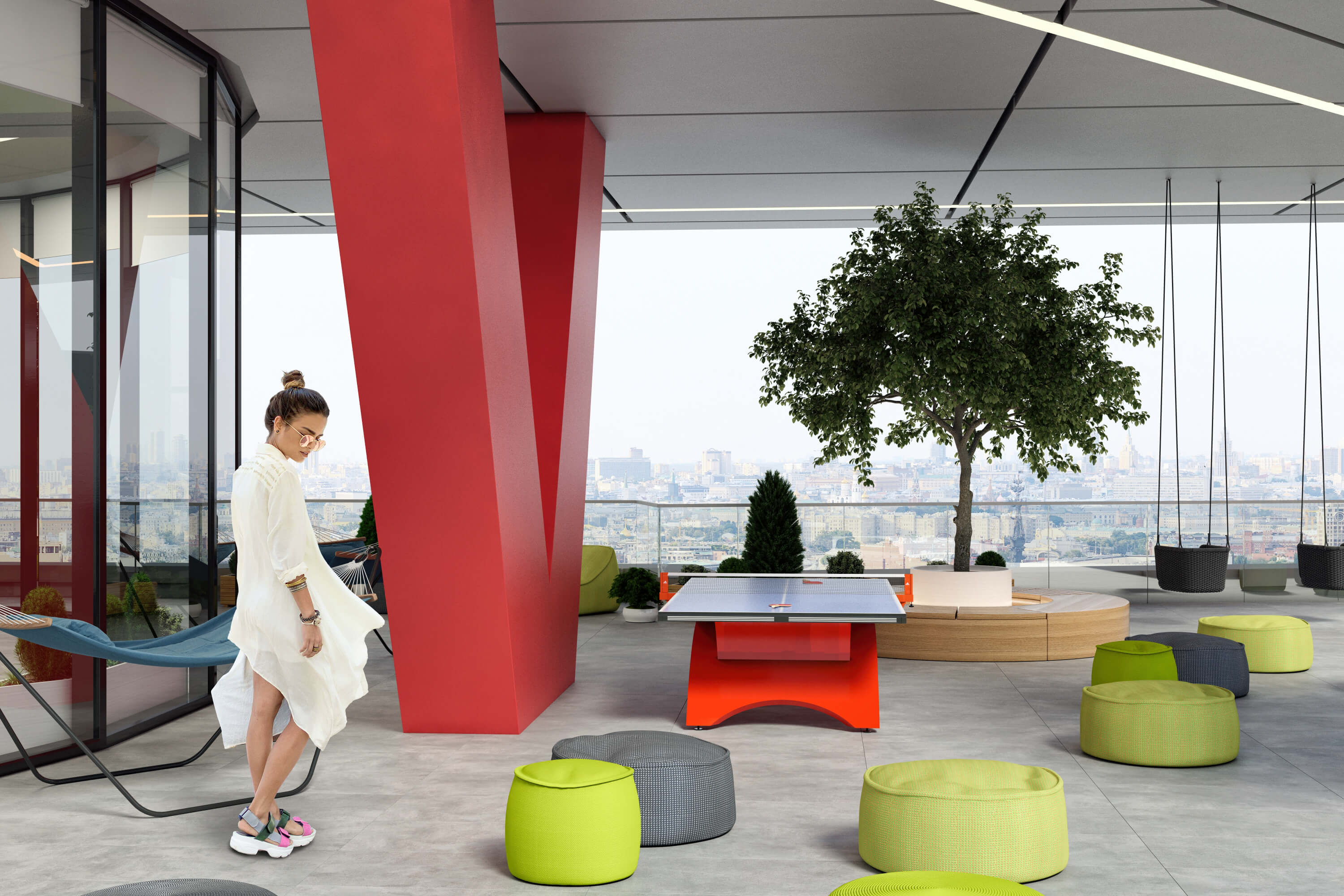 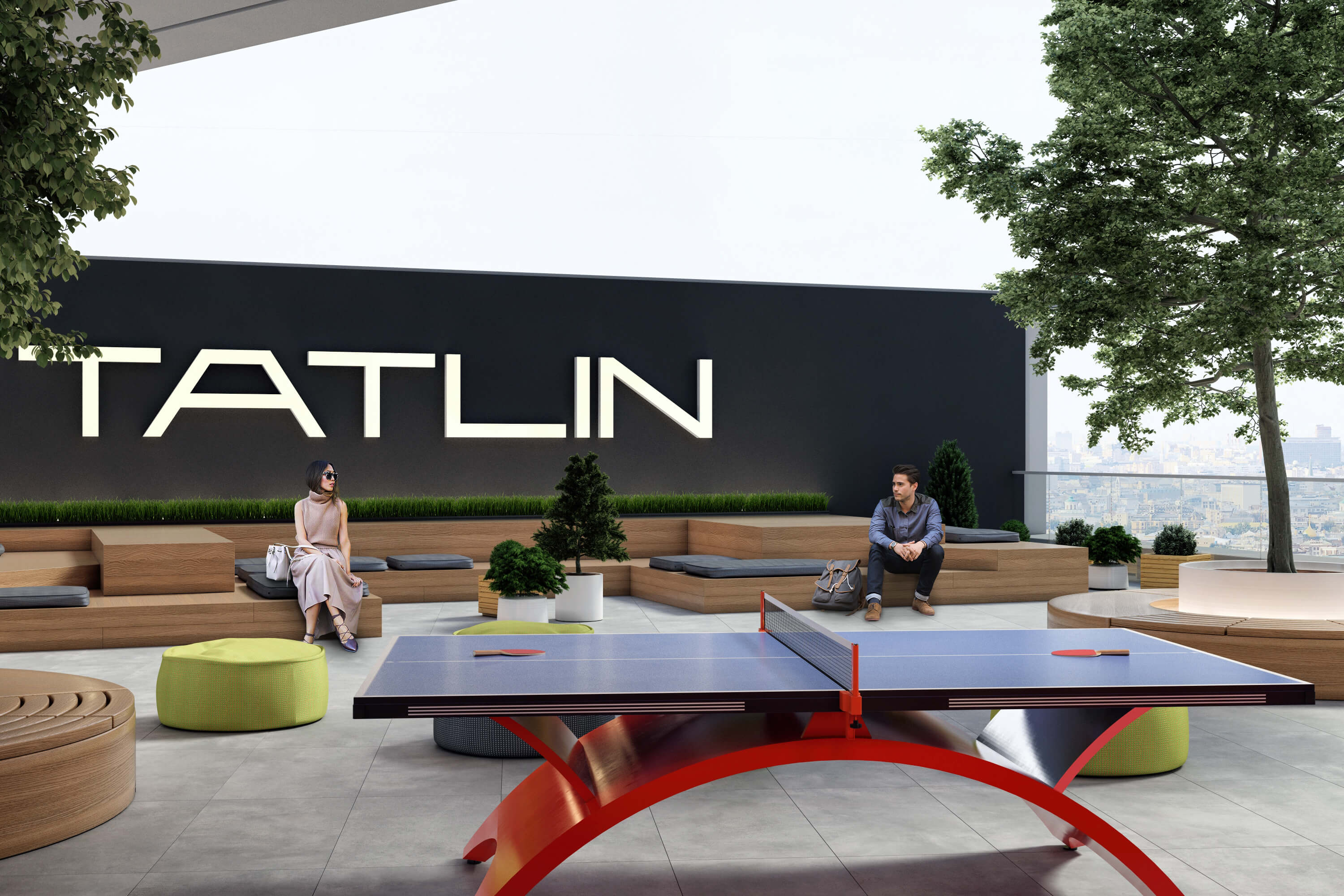 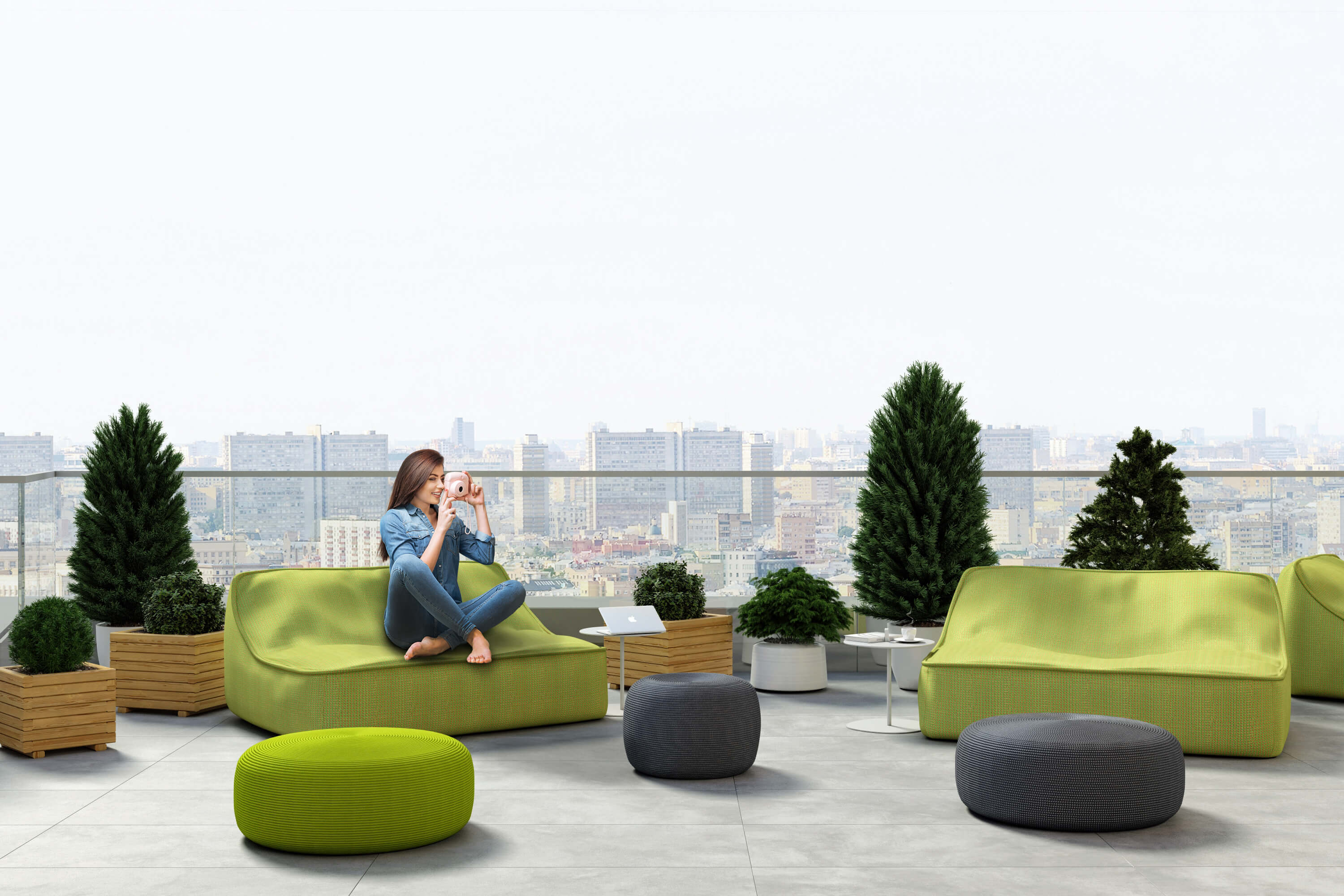 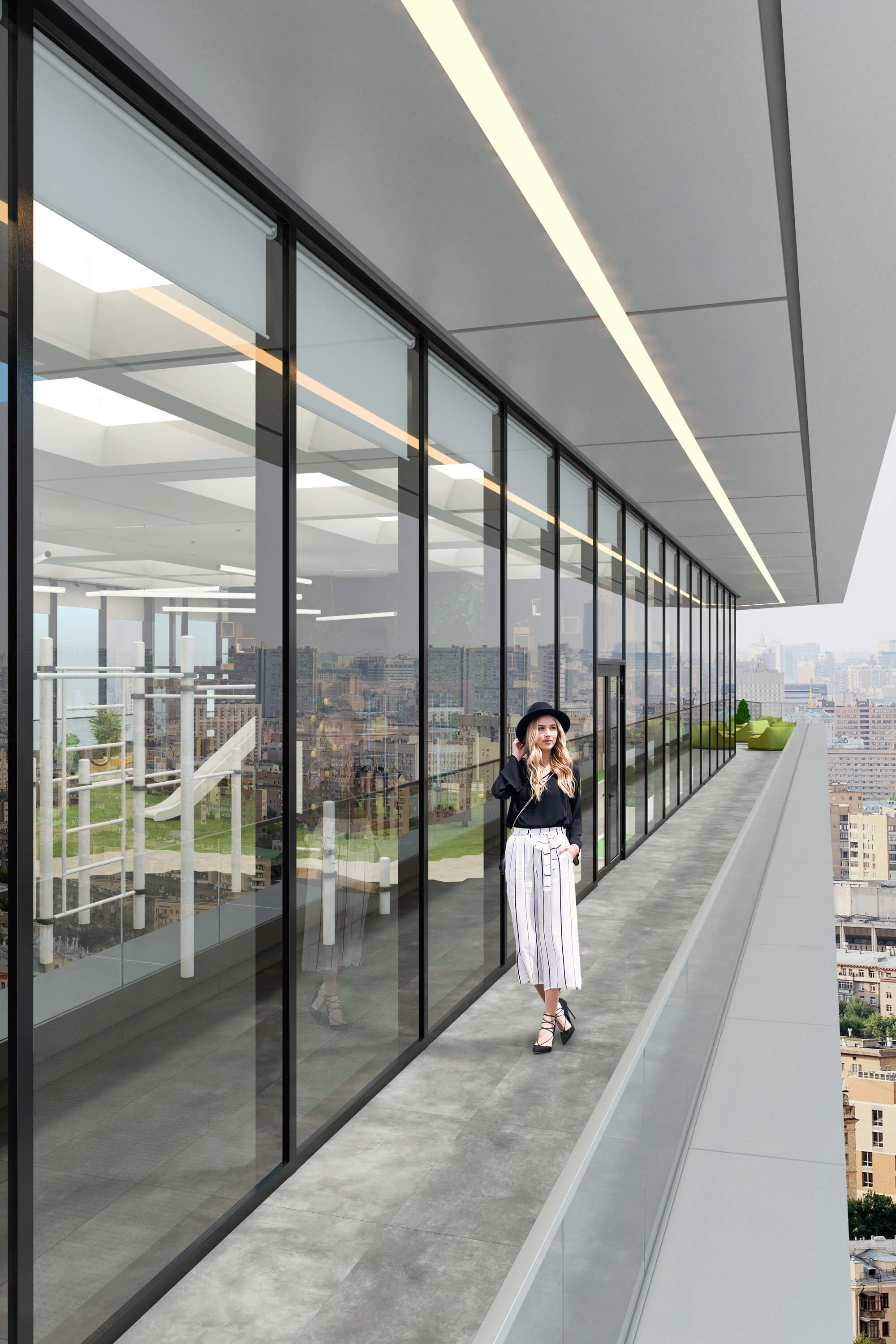 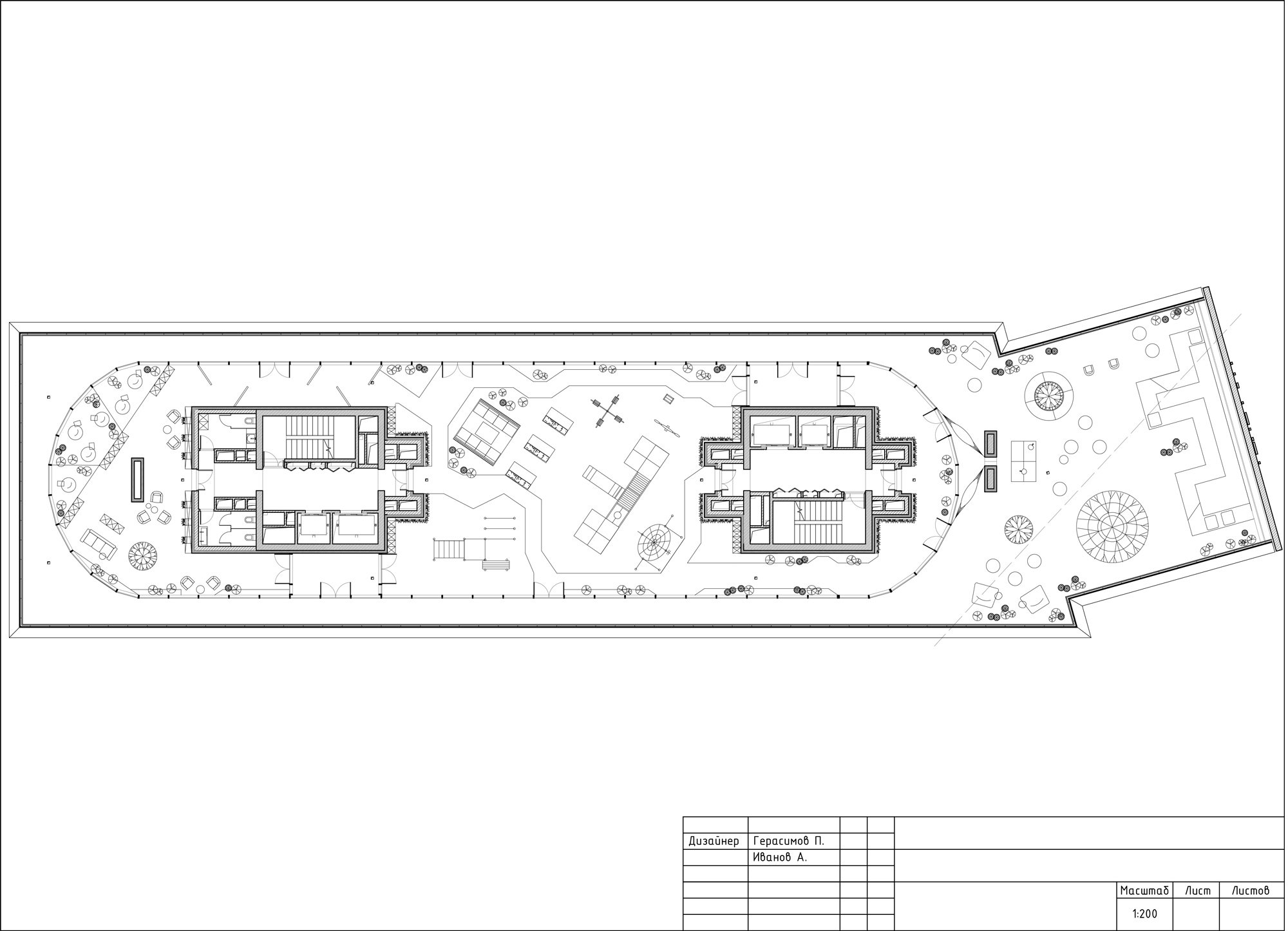